NEW YORK -- It was still dark in lower Manhattan, a little before 6 a.m. Wednesday, when the parents of Ramarley Graham shook off their sleeping bags and assembled on the steps outside the Department of Justice office of U.S. Attorney Preet Bharara.

Dozens of supporters had joined them for the all-night vigil in honor of the Bronx teen gunned down by NYPD police exactly four years ago. They slept when they could on the cold, brick plaza outside the DOJ building. They sang songs, read poems and talked to reporters.

"Fact #1!" a man yelled out, the crowd repeating each phrase in unison. "Ramarley was unarmed!

Fact #2! Ramarley was not committing a crime!

Fact #3! Ramarley did not run from the NYPD!

Fact #4! The NYPD did not have a warrant to enter Ramarley's home!

Fact #5! The NYPD shot Ramarley in front of his grandmother and 6-year-old brother!

Fact #6! The NYPD interrogated Ramarley's grandmother for seven hours after she witnessed his murder!

Fact #7! The NYPD denied Ramarley's grandmother access to her lawyer.

Fact #8! The NYPD assaulted Ramarley's mother at the precinct after killing her son!"

Then Constance Malcolm and Frank Graham, Ramarley's parents, stepped up to a podium.

"Losing a child is the worst possible thing anything can go through," Frank Graham said. "You don't sleep at night and you wonder during the day... You cry yourself to sleep when you do get sleep and you wake up with tears."

"Let us have our day in court," Frank Graham added. "We want to know who did what, when they did it and why they did it. We deserve that. The city deserves that."

The vigil was the culmination of a series of protests Graham's parents had organized in the month leading up to the anniversary of his death on Feb. 2.

Second is that New York City Mayor Bill de Blasio and NYPD Commissioner William Bratton fire the officers implicated.  "It's four years later and they're still on the force and [Richard] Haste, who shot Ramarley, has an over $25,000 raise," Colon said, a fact that was first reported in The Huffington Post.

The DOJ started reviewing the evidence in Graham's case over two years ago and launched a formal investigation in September 2014. While Justice Department civil rights investigations are notoriously long affairs, they don't necessarily have to be. The department's investigation into the shooting death of another unarmed black 18-year-old, Michael Brown, in Ferguson, Missouri, was completed in less than seven months.

Asked for an update on the investigation into Graham's death last month, a DOJ spokesman said only that it was "ongoing."

In the meantime, the NYPD won't release the results of its own Internal Affairs investigation into Graham's death until Bharara and the Justice Department wraps up its investigation, an NYPD spokesperson told HuffPost.

During a meeting with the city council's black and Latino caucus last month, Commissioner Bratton said the DOJ had directly asked the police department to withhold the Internal Affairs findings, delaying any departmental trial or discipline officer Haste might face.

During Wednesday's early press conference, Colon noted that the NYPD doesn't have to heed the Department of Justice's request.

"The Anthony Baez case is an example of when an officer was fired prior to the DOJ making a decision to prosecute," Colon said, referring to the 29-year-old Bronx man who died after an NYPD officer placced him in a chokehold in 1994. The DOJ convicted that officer, Francis LIvoti, on civil rights charges. He spent seven years in federal prison.

"So if Bratton and Mayor de Blasio want to do it, they can do it," Malcolm added.

Reached for comment Wednesday morning, Monica Klein, a spokeswoman for the mayor, called Graham's death a "tragedy" but did not address his parents' demand to fire Haste and the other officers.

"Under Mayor de Blasio, the NYPD has piloted body cameras, retrained its officers and established new Use of Force guidelines—all part of the Mayor¹s pledge to strengthen the relationship between police and the communities they serve," Klein said in an email.

On Feb. 2, 2012, the NYPD said a narcotics unit saw Graham “adjust his waistband” outside a Bronx convenience store and took that to mean the 18-year-old might have had a gun. The police also suspected that Graham had recently participated in a drug deal.

According to the NYPD's account, Graham ran when the officers approached him. But surveillance footage appears to contradict that claim. It shows Graham calmly walking up to his mother’s East 229th Street apartment building, opening the door and walking inside. Moments later, Haste and one other officer ran up to the building, guns drawn, and attempt to kick down the door.

After about five minutes, the officers managed to get inside the building, go up the stairs and knock on the door to the apartment. They did not have a warrant.

Haste confronted Graham in the bathroom, where the NYPD says the teen was trying to flush a bag of marijuana. He allegedly reached for his waistband during the confrontation, which prompted Haste to pull the trigger. A single bullet pierced Graham's chest, killing him.

No gun was found on Graham, nor anywhere in the apartment.

"Why did you shoot him? Why you killed him?” Hartley asked Haste, according to the account of events provided in the family's lawsuit against the city.

“Get the fuck away before I have to shoot you, too,” Haste responded, before pushing the tiny 58-year-old into a nearby vase, the family allege.

Hartley says she was taken to the police precinct and interrogated for seven hours. For most of the interrogation, she was not allowed access to her lawyer. When Graham's mother showed up to the precinct and attempted to retrieve Hartley, she alleges one of the officers at the station tackled her.

Although Haste testified to both grand juries about the shooting, those testimonies were never made public. The family settled its lawsuit in January for $3.9 million, precluding the NYPD from publicly defending Haste's actions in court.

So after four years, there's never been a full public accounting of how and why government officials in New York City broke into a home without a warrant, then shot and killed an unarmed teenage boy.

After spending the night barely sleeping outside the DOJ headquarters, Malcolm has to pull a double shift at her job Wednesday. She's a nurse's assistant at an assisted living home.

PHOTO GALLERY
8 Facts About The Death Of Ramarley Graham
Download
Calling all HuffPost superfans!
Sign up for membership to become a founding member and help shape HuffPost's next chapter
Join HuffPost 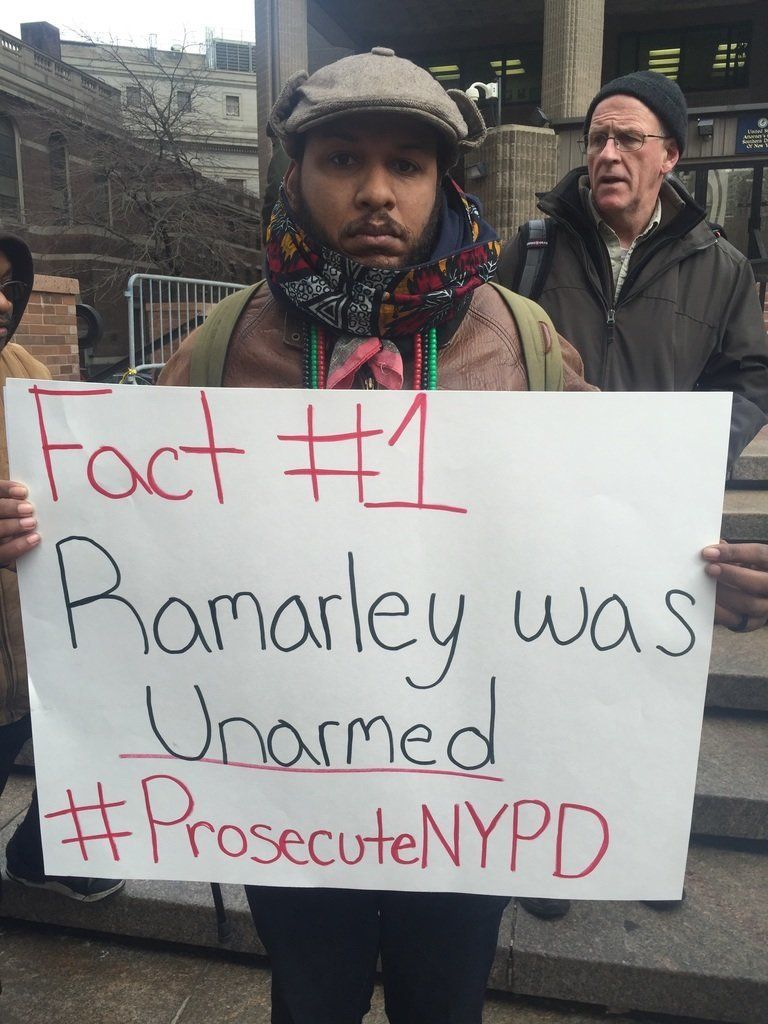