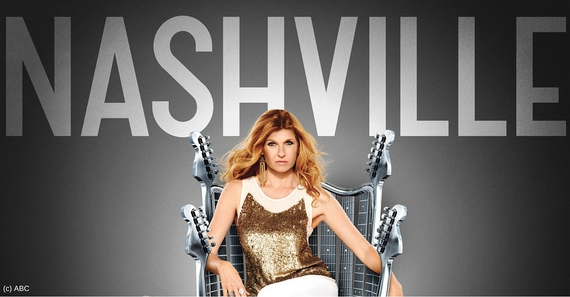 In honor of Rayna James and Deacon Claiborne's wedding this week on ABC's hit country musical TV Show, Nashville, I want to share why Rayna is one of my all time favorite female TV characters ever.

Now, if you think about it, that's a pretty big title to hold - at least, in my own little circle in the world.

But let's face it. In TV, character is everything.

If you can create a character that people love as much as I love Rayna James - you have yourself one damn successful franchise.

Did I mention I love Nashville's main character, Rayna James? (Sorry, I can't help myself sometimes.)

Now, I love her for mainly three reasons, but before I go any further, I'd like to make one point first.

I believe Rayna James to be one of the best characters on TV -- period.

However, I'm distinguishing her as a female in this piece -- solely because it's so refreshing to have a character with her attributes that's also a woman.

Characters like her - smart, level-headed, strong and likeable - have historically been reserved for men so a character like Rayna represents a fact that times have finally changed.

Now that's out of the way, let's get to the juice, shall we?

I love Rayna because she's smart.

Unlike the character, Juliette Barnes, Rayna thinks things through and considers the consequences of her decisions. For instance, before she opened her own label, she weighed the pros and cons. I liked that she considered all her options and how her decision would affect those in her life. It's smart to not always react instantly but to pause, decide and act instead.

But what I also love about her is that after she considered her options, she decided to follow her heart and have faith that it would work out. It's nice to have a female character that not only models rationale behavior but also has faith and confidence in her own decisions despite moments of doubt.

Of course, it's awesome that Callie Khouri created Rayna to be a level headed woman, dealing with the challenges that come with stardom and being on top in the ever competitive country music world.

I personally enjoy that the conflict that drives her story stems from the typical challenges in life that Rayna faces as a businesswoman, mother, friend, and soon-to-be wife and not from her making perpetual bad choices that amount to nothing more than screwy, soap-opera type antics.

I love Rayna because she's strong.

She has a backbone but she handles things with as much dignity as possible. A good recent example is when Rayna kept her boundaries with Markus Keen, who was being very disrespectful and unprofessional by making a move on her when he knew she's engaged to Deacon. (Seriously? Who would choose that dude over Deacon?)

Rayna didn't let Markus get away with his behavior but she dealt with it in a mature manner. She was open, honest and stated exactly where she stood in a respectful way. She didn't swoon because a man was interested in her because why wouldn't he be?

(Interestingly, I think Markus' reaction is indicative of having more female writers in the room. I've never seen an all male writing room write a story with a man reacting as immaturely as he did by dropping the album and her label.

From personal experience, it was always nerve wracking to have to reject a man's advances because if he was one of those guys like Markus (and there are more out there than you'd think), it was going to be followed by a tantrum. It's really as unnecessary and annoying as Rayna thought it was and I'm glad there are more women in the writing room to capture this different perspective.)

I love that Rayna is a good role model for young women.

Let's face it. My generation didn't have many female characters to truly look up to. It's no wonder that every woman I meet around my age loved Wonder Woman. She was about all we had and I have to admit personally, it was a little confusing why Wonder Woman had to save the day wearing what amounts to a swimsuit. (Even as a kid, I could recognize that a pair of slacks was a much more practical choice.)

And I'm not alone in thinking this about characters like Rayna. I've recently read four out of five women want a positive portrayal of women onscreen to provide guidance and inspiration for young girls.

That's not to say we can't have our female antiheroes, which are just as fun in a different sort of way.

But we definitely need more characters like Rayna James. She shows women that you can go after your dreams. Your life might not be perfectly balanced all of the time because that's impossible. But you can do a damn good job if you focus on being a good person and making smart choices.

She even shows women that you can reach the top -- and support other women in the process! (I have to admit this is one of my favorite reasons I love her.)

And with that, I now rest my case.

Rayna is not only one of my all time favorite female characters on TV but also one of the best ever.

But what I'd still like to know is this -- why do you love Rayna James?