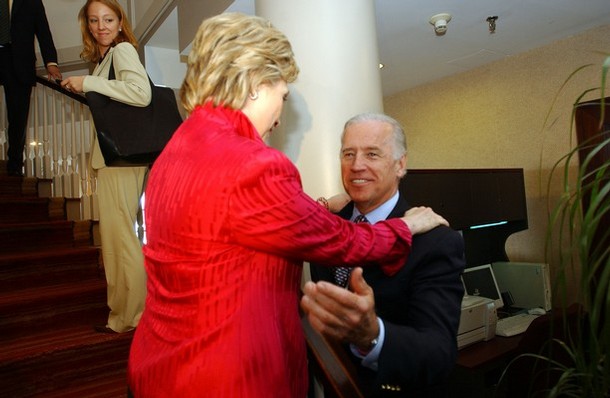 Sen. Joe Biden's a perfectly appropriate vice presidential running-mate for Sen. Barack Obama. He's got 36 years of Senate experience, is a true intellect, a foreign policy expert, and a genuinely nice guy. But ever since Sen. John McCain added plucky Alaska Gov. Sarah Palin to his ticket, the old adage nice guys finish last is beginning to take on new meaning in this year's presidential contest. It's time to dump Biden and replace him with Sen. Hillary Clinton. I don't care how it's done. Campaign chief David Axelrod can figure that out. And the sooner the better. Because I'm starting to think that if Team-Obama doesn't do something dramatic fast, it's gonna lose this election. There's a worrisome shift in momentum and in the polls. The Palin phenomenon, while truly unfathomable to Democrats, has energized McCain's campaign and allowed him like Houdini to snatch Obama's "change" theme right out from under him. It's time to snatch it back.

Conventional wisdom says replacing Biden with Clinton can't be done. That it's too late. That it'll make Obama appear indecisive, impulsive and lacking good judgement. Many Democrats believe this would cause irreparable harm to the campaign, ringing Obama's death knell. But this couldn't be further from the truth. In fact, it'd be a freakin' coup for Obama, and would instantly melt Palin's undeserving outsize political ice cap.

To be sure, a Biden-Clinton switch would cause quite a stir in the media. They'd accuse him of all sorts of things, from being politically expedient and flip-flopping to being irrational and ill-equipped to be president. The talking heads on CNN, Fox and MSNBC would be locked in a non-stop frenzied orgy of derisive rhetoric. But we also know that it would make about 18-million Hillary voters ecstatic at the same time. So, honestly, who really cares what Joe Scarborough, Keith Olbermann, Wolf Blitzer or Brit Hume thinks? These pundits don't constitute an appreciable voting block. What they think and feel would be utterly dwarfed by the euphoria from Clinton's faithful supporters. It's a pretty safe bet that an Obama/Clinton ticket would capture virtually all of these loyal Clintonistas. It's also a safe bet that many of those highly coveted 18-49-year-old women who polls show migrated to McPalin this past week would drop the spunky little hockey mom in a heartbeat for Hillary. Lastly, it's an even safer bet that Obama's current voters would stick with him as well. So, where's the downside? Show me a Democrat, today, who'd dump Obama for McCain if Biden was replaced with Clinton? They don't exist.

Obama should do what the Republicans would do in this situation. In fact, he should do exactly what his opponent did. Shake things up. Be unconventional. Roll the dice. Out-McCain McCain. Who cares how it looks. Who cares what the media thinks. One thing's certain: there's an 18-million deep pot of gold out there waiting to be mined. An Obama/Clinton ticket would slam the door shut on this election.