Snoop Dogg and Willie Nelson are no longer pariahs for their pot proclivities: as new polling indicates, a majority of Americans now agree with them that marijuana should be legalized. And if there was ever a small opening for the GOP to win the hearts and minds of millennials, pot might be the golden ticket.

All signs show the issue is a generational one; Americans aged 18-29 are the most favorable toward marijuana legalization--with two thirds in support--a 22 point divergence from their 65 and older counterparts. But before you label the "kids these days" a bunch of lazy stoners, you should also note that weed consumption is down. In fact, it's plummeted. According to Gallup, marijuana use among 18-29 year olds has fallen 20% since 1985.

In other words, more young Americans are "just saying no" to drugs, but nevertheless saying yes to legalization. Why might this be? "The same reason a heterosexual person might support marriage equality is why someone who doesn't smoke [pot] might support legalization," says Mason Tvert, a spokesman for the Marijuana Policy Project. "They recognize it's the right thing to do."

Earlier this year, GOP Senator Rand Paul seized on this increasingly populist sentiment when he said Presidents Barack Obama and George Bush could have "conceivably been put in jail for their [past] drug use" and subsequently "ruined their lives."

Yes- a GOP Senator publicly indicated that marijuana laws are unfair and draconian. This is because a marijuana smoker is arrested every 42 seconds, and if we were to regulate and tax marijuana, it would lead to nearly 87 billion in revenue over the next decade. To put that in perspective, we cut 85 billion with the sequester.

"The federal government and anti-marijuana crusaders have been exaggerating the harms for decades," Mason Tvert says. "Young people are hearing more about marijuana and marijuana policy than ever before and realizing it's less harmful than alcohol."

And herein lies the opening for a GOP that struggles to relate to young voters on just about everything.

1) The GOP can re-brand itself from the party who denies science by publicly highlighting the data that shows marijuana is safer than tobacco or liquor--there were a total of 25,692 alcohol-induced deaths in 2010, while there have been zero recorded from pot.
2) A Marijuana tax is a smart way of raising revenue without offending the rich or Norquist base. Taxes are expected to bring in $67 million a year in Colorado and Washington is projected to bring in $1.9 billion in five years.
3) Allowing the free market to dominate marijuana fits the GOP economic and anti-big government narrative and could help create an estimated 100,000 new jobs.
4) As Senator Paul intimated, weed is a racial justice issue with black and brown people disproportionately likely to be stopped for and incarcerated for recreational use. For a multicultural millennial generation, a sensible position on marijuana will convey empathy and sensitivity about race in America--something the GOP most definitely needs ...

Let's be clear, the GOP still has many hurdles to overcome in following the lead of Rand Paul on marijuana--defying the older social conservative wing of the party who, according to Gallup, still oppose marijuana, and standing up to private prison lobbyists who contribute heavily to political campaigns for tougher crime legislation--being chief among them. And liberals can still own the marijuana issue as well--if they choose. But given the large degree of silence on pot from the Obama Administration as well as Democratic party leaders, it seems the opening is primarily with the GOP at the moment. We'll see if they can grab it ... 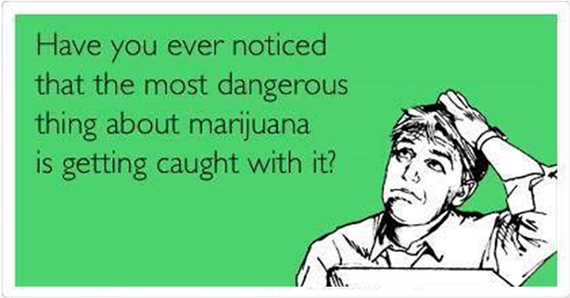 Matthew Segal is co-founder and president of Our Time, a nationwide non-profit organization that leverages online organizing, new media, and popular culture to enhance the political voice of young Americans. He can be followed on Twitter @OurTimeMatthew