My parents could not believe it when I told them I was going to attend my 30th high school reunion this weekend.

"Why would you want to do that?" Mom said.

"I want to see some old friends."

But the answer is more complicated than that. I rarely speak warmly about my alma mater, Van Buren High School in Van Buren, a town of roughly 200 in northwest Ohio. I felt like an outsider as the only Jew other than my two older brothers. But that feeling of being different started long before high school. It began in fourth grade when my family moved to rural Ohio from western New York state. I spent fourth through 12th grade in Van Buren schools. In 1982, I was one of 72 graduates.

I sometimes describe my family's move to Ohio as akin to transplanting ourselves in Purgatory. Truth is, life is never that black and white.

Yes, some of my memories of high school are painful. At graduation, a minister, elected to give the invocation by my class, implored us all, "Praise the Lord. In Jesus's name, let's pray." I had begged the principal to make sure that the minister did not mention Jesus. God, I said, would be more palatable to my family. My high school held annual Easter and Christmas assemblies presided over by ministers. Given advance notice on those assemblies, I retreated to a practice room to play my flute. At my graduation, I could not just leave. My family, including both grandmothers and a great-aunt, were there. When that minister asked us to pray in Jesus' name, my face flushed red in discomfort. That was my last memory of my high school, once again feeling isolated because my religion was not the same as that of my peers.

Why return to a place where I often felt alone? Memories may not change, but perspective does. I used to blame my peers for what I felt and for what my school did to promote Christianity. As an adult, and as a journalist who has covered church/state disputes, I realize that children are rarely the ones to blame for practices that promote religion in school. It is the adults, the school boards, the superintendents and the principals who make decisions on how to handle religion in school. I have written about a school that does what every school should do: Teach children about the world's religions so they might better understand differences and similarities between faiths. Then, the children might be less apt to tease and more apt to tolerate each other. 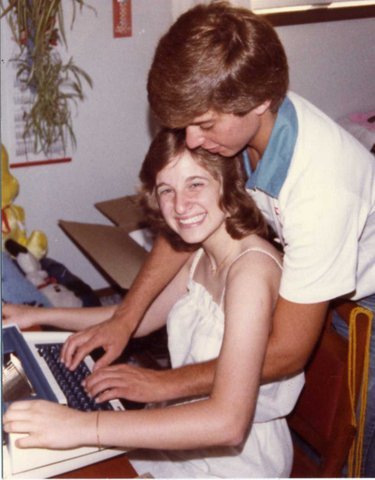 Kevin, the author's brother, helps her try out her high school graduation present in 1982

Why return to a place where I felt so different? Because mixed in with unpleasant memories is an abundance of good ones. My best friend from high school will be at the reunion. Fellow band and chorus members will be there too. These are people who knew me well for nine years of my life -- not just the four years of high school. Many of them knew my middle brother, Kevin, who died in a car accident when I was 21, and he 23. Talking to my peers could even bring a little bit of my brother back for a moment or two. Kevin made my graduation palatable and, in the end, joyful as we celebrated at home. He helped me try out my graduation present, a Smith-Corona typewriter that I would use through college. It was Van Buren where I realized just how much I wanted to be a writer, just how much I wanted to find a way to express what I felt about the world.

Why return? Because the one time I went to one of my high school reunions, I had fun. If anything, it was a tad embarrassing in a good way. It was my fifth reunion, and about 30 of us attended. Gathering at a local park for a barbecue, at one point we sat in a circle under a picnic shelter. Someone asked each of us to give a report on what we had done since high school. A recent graduate of Northwestern through an accelerated master's program, I was one of the few or perhaps the only one who had a master's degree at that point. I also was about to start a new job as a reporter at The Cincinnati Enquirer. My classmates applauded me. I was stunned and yet pleased that my peers were proud. In high school, I thought many resented me for always getting stellar grades. As an adult, I realize that perception is not always reality, especially when a teenager is trying to analyze what peers think.

Why return? I declined invitations to attend my 10th, 15th, 20th and 25th high school reunions. I've always had a great excuse. I have lived nowhere near Findlay since graduating. Maybe blame Facebook in part for that tug pulling me back. I have reconnected with many classmates online and begun to learn bits and pieces about their lives as adults.

All of us share a piece of our past, our coming of age as teenagers. It is a treasured part of my childhood, even if every memory is not precious. Do I remember everyone well? No, but I have fond memories of classmates I have not seen in decades.

Why will I return? Maybe the reason is not so complex. We had the same teachers. Most of us all went together on the same senior class trip to Cedar Point. I liked a lot of my classmates. Yes, I felt different, and the path I took after high school varies greatly from that of many of my peers. I probably still will feel different when I reunite with my classmates. The difference is, now I have no problem feeling that way. I have changed from a self-conscious teen to a nearly 50-year-old woman very comfortable in her own place in the world. Embracing the past is a part of carving out my future.