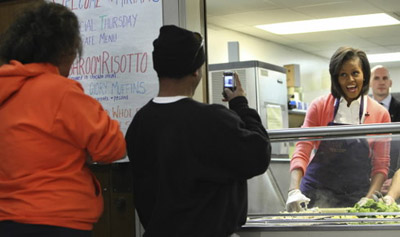 Michelle Obama made headlines last week by using those famously toned arms of hers to sling some mushroom risotto, steamed broccoli and fruit salad at Miriam's Kitchen, a D.C.non-profit that serves homemade meals to 4,000 homeless people a year made with fresh local and organic foods instead of processed or canned foods, as the New York Times reported.

Obama told the press who gathered to watch the First Lady ladle:

I want to urge people who are listening that if you have an opportunity, to come by -- not just this soup kitchen but any soup kitchen in your community. And helping is an easy thing to do. Collect some fruits and vegetables. Bring by some good healthy food. You know, we want to make sure that our guests here and across this country are eating nutritious items. Today we had fresh risotto with mushrooms. We had broccoli. We had fresh baked muffins with carrots in it. And my understanding is that this facility is able to provide that kind of meal for about $1.50. And that's an incredible thing to remember: that we can provide this kind of healthy food for communities across this country, and we can do it by each of us lending a hand. (hat tip: Obama Foodorama)

Sounds like a great idea, doesn't it? Everybody knows that our reliance on cheap processed foods is causing all kinds of diseases that disproportionately affect poor folks who can't afford pricey produce. Hey, even George Will--who still can't wrap his head around the fact that greenhouse gases are cooking our collective goose--has suddenly gotten the Gospel According to Pollan and connected the dots between our dumbass agricultural policies and fat-assed populace.

Other conservative commentators were, however, deeply disturbed by the whole event. An AP photo which showed a man using his cell phone camera to document the historic occasion of his being served by Michelle Obama sparked a tizzy in the wingnutosphere, which took offense at the idea that an individual affluent enough to afford a cell phone should be receiving free meals at a soup kitchen. Wonkette dished up a taste of these brain-dead tirades, including one from Kathy Shaidle, a blogger whose curdled rantings suggest she's learned at the fetid feet of Limbaugh. She begins by expressing that holier-than-thou-but-not-so-Christian contempt for the poor that is the hallmark of a certain kind of conservative:

Today's "poor" are the rich Jesus warned you about: fat, slovenly, wasteful of their money and other people's.

I prefer to call them "the broke."

A lot of (really naive) people are wondering (or pretending to wonder, when they're in public) how this "homeless" guy could "afford" a cellphone:

It would be better phrased: why is a guy with a cellphone homeless? Because then the question answers itself.

He spends all his (our) money on cellphones and, most likely, tattoos and drugs and booze and other crap, and has no money left for a home and food. And why should he bother? We pay for his shelter and food anyhow.

She goes on to validate my theory that wingnuts see wholesome foods as part of a vast left wing conspiracy:

What's really funny in that news story by the way is what they're serving at the soup kitchen: risotto with brocolli. Obviously some rich white liberal did the cooking that day, feeling all proud of herself, and what thanks did she get? Some lowclass loser going, "You expect me to eat this weird crap?!"

To which Salon's Alex Koppelman responded:

For the record, it was actually mushroom risotto. And her nasty "weird crap" remark? It's rice cooked in chicken stock with some vegetables, something most cultures are quite familiar with, no matter what you choose to call it. Come on.

This, in turn, elicited the following response from Shaidle:

Salon's Alex Koppelman is obviously a delusional liberal pantywaist who can't stand to have his romantic notions about "poverty" challenged (by someone who knows what they're talking about firsthand, and is also a better writer than he is.)

I'd rather be right than "nice" and "polite" -- and so would any intelligent adult who values the truth.

I'm betting Alex Koppelman is a grown man who still rides a bicycle. By choice. On the sidewalk.

This all seems like a trivial bloggy brouhaha, but it's indicative of a knee-jerk conservative mentality that feels compelled to malign liberals as broccoli-eating, bicycle-riding degenerates.

It may not be a deliberate, coordinated campaign; then again, maybe it is. Why is it that when progressives talk about the benefits our country could reap from say, investing in mass transit, or overhauling our school lunch program so that it might actually nourish our kids instead of poison them, too many folks on the right start to spew the kind of rancid rhetoric I've quoted here?

When did such wholesome and innocent things like riding a bike or liking vegetables turn into symbols of liberal decadence? Then again, take a look at the de facto head of the Republican Party, a man who evidently hasn't been on a bike or eaten a bite of fresh produce in decades. The Obamas, with their in-your-face fit physiques and ostentatiously heathy eating habits, must drive him crazy. Deepak Chopra rightly declares Limbaugh a symbol of anti-morality and offers an astute analysis of Limbaugh's appeal to his followers before concluding:

By any sane account, Rush Limbaugh is dead weight when it comes to finding a solution to anything. Like Sarah Palin, his spiritual bride, he lurks in the shadow of the human psyche, expressing the dark anger, resentment, jealousy, and vindictiveness that society can never escape.