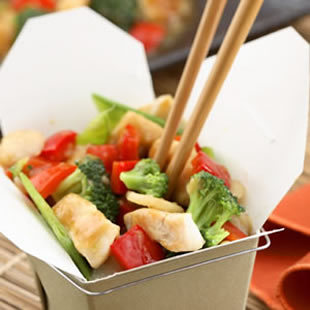 You know the scene: Our heroine has either been jilted, lost a job, is at the end of a spectacularly bad day, or, perhaps, has just been on a montage of hilariously bad blind dates.

We know this because she's wearing pajama pants and a cute T-shirt and maybe a floppy oversize robe with the belt trailing adorably, and because she is eating Chinese food directly from the little cardboard containers using a pair of chopsticks while watching a chick flick on TV. Which is ironic, because we, the audience, are watching a chick flick ourselves. Very meta.

Chinese takeout can indeed be go-to comfort food for a broken and stressed-out heart. But why not pizza, or cheese curls, or a bowl of mashed potatoes and gravy, or an entire chocolate cake? You know, the rest of the stuff us regular slobs eat when we're feeling sorry for ourselves?

Simple: Chinese food is manageable and brightly colored, and our heroine looks delicate and pretty eating it -- or, at least, pretending to eat it. Actors love chopsticks, because you can dip them in and out of that container a dozen times and still not have consumed more than six grains of rice and a snow pea.

Pretending to eat is an important part of Hollywood make-believe. I was in a very tiny, locally produced, indie film many moons ago, and, in one scene, was required to wolf down a hamburger as if I were starving. I was young, it was my first gig, and no one told me to pretend to eat. We did 16 takes. I went home and threw up. I don't think I ate another hamburger for, like, two years.

Imagine our pretty heroine inhaling a slice of 'za, a string of cheese dangling from her greasy chin, or sitting in a food coma with that strange orange dust all over her finger and lips, or hoovering an entire cake. Unless the film is out-and-out slapstick, like Bridesmaids, this ain't gonna happen. Even world-champion eaters Lorelai and Rory Gilmore, of Gilmore Girls fame, drank "coffee" out of empty cups and took invisible bites of their Moon Pies and Pop-Tarts.

In most TV shows and movies -- and most especially in rom-coms -- everything is cuter than in real life. Our heroine and her carelessly swept-up hair held in place by a pencil (this look took two hours in the make-up trailer to achieve). Her pajamas. Her tears, which may make her nose a tiny bit red, but will not cause a major snot storm, blotchy cheeks, or a face so swollen she looks like a blowfish. Even her food is cuter -- her pretty Chinese comes out of old-fashioned takeout cartons, not those ungainly Styrofoam clamshell containers the rest of us eat from.

The last time I had Chinese takeout, not only did it arrive in the dreaded clamshell container, but I managed to dump it all over my kitchen floor while taking it out of the delivery bag. My dog thought the orange chicken was a little bland, but approved of the diagonal-cut carrots.

This would never happen to a rom-com chick.

And that's probably the main point. The same things happen to rom-com chicks that happen to the rest of us: they get dumped, they lose jobs, they have cruddy days, they go on horrible blind dates. But the yucky consequences are fleeting and there's a wonderful guy, new opportunity, new job, or even all three, just around the corner. Otherwise -- duh -- it wouldn't be a rom-com. It would be some other kind of movie, one we definitely don't want to watch while eating our own mediocre, clamshell-packed Chinese takeout, wearing stained sweatpants, and crying until our eyes are swollen practically shut.

I have this theory that I'm going to test the very next time I have a bad day. I'm going to find a Chinese place that still delivers in cartons. I'm going to invest in chopsticks and a pair of adorable pajamas. I'm going to style my hair in messy-casual cuteness, even if it takes me two hours to do it. And then I am going to adorably eat my food, one snow pea at a time. If I do it just right, my hot new guy, my amazing new job, and my bright shiny new opportunity will be along any moment! Kate Hudson promised me so.