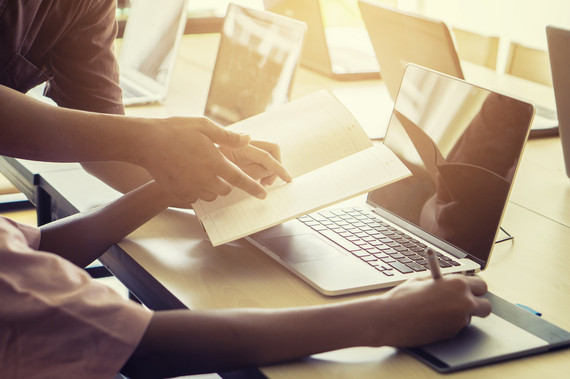 Computers began reaching the business world during the 1980s. Companies used them to automate many routine manual tasks. This led to what economist Robert Solow dubbed the Productivity Paradox. In 1987, he famously quipped: "You can see the computer age everywhere but in the productivity statistics."

The problem Solow had identified was that while computers could automate manual processes, real productivity gains would only be experienced when technology was actively used to reinvent business processes.

The best businesses soon realised that computers were not just a tool to improve efficiencies but to redesign business processes. This sort of thinking has given rise to many modern innovative businesses like Twitter, Uber and Airbnb.

Now schools are falling into the same trap as businesses did 30 years ago. They are focusing on the wrong objective when it comes to using technology in their classrooms.

I recently came across a newsletter written to headmasters of schools around South Africa. It began by posing a question:

Is technology a "nice to have", or will it actually improve the learning and educational outcomes of the youngsters in the class? If it doesn't, or won't, there can be little justification for it.

On face value this seems like a good question to ask. But it contains two dangerous flaws. The first is that visible "improved...outcomes" is presented as the main reason for using technology. The second is assuming that the relationship is just between "technology" and "improved learning".

The writer, from an organisation representing school leadership, went on to list the advantages of using educational technology, using phrases and words like, "Time is freed up", "convenience", "ease of handling", "efficient way of collecting and storing information" and "immediate access". These phrases point to the underlying perspective that many teachers have about the goal of technology in the classroom. It is seen as a means to improve classroom efficiency.

This perspective also pervades students' perceptions. A research project just completed by one of my Masters students, which we hope to publish soon, found that 92% of students listed technology providing "improved access to information" as a key reason for using it for learning.

Stuck in the industrial age

While businesses might be excused for initially adopting an efficiency objective when it comes to technology, schools cannot. This objective has already been shown to be ineffective for businesses. More importantly though, efficiencies - unlike for business - should not be the objective of successful teaching.

Schools have lauded the rise of a new era in education that celebrates diversity, opportunities and innovation. However, most are actually using technology to reinforce these same industrial approaches rather than revolutionising the classroom.

Pursuing efficiencies to get students through more content, faster and with less effort, is the wrong objective. The focus should be on effective rather than efficient teaching. Technology is not just about computerising existing processes - it is about rethinking ways to teach and learn.

The second flaw in the letter-writer's question is the mistaken assumption that technology is the only factor that has an impact on learning. This makes the serious mistake of ignoring pedagogy, or ways of teaching.

There is a framework that sets out how this can be avoided. The TPACK model argues that there are three key elements for effective teaching with technology - Technology, Pedagogy And Content Knowledge. Teachers know their subject content and increasingly know how to use technology. However, without the "glue" of an appropriate pedagogy or method, technology can't be effective in teaching content.

But many schools seem to assume that the technology vendors whose solutions they've implemented will be their teaching guides. It's rather ironic to have teachers led by technologists! Other schools simply ignore teaching approaches, assuming by handing out iPads effective learning will spontaneously take place - leading to some spectacular failures.

Technology affords opportunities to move from traditional passive consumption learning to active approaches. These include curating content, engaging in conversation and developing content through iterative cycles of correction.

Such approaches form the basis of what I call the @CTIVATED Classroom model, which is designed to support those who are teaching with technology.