Seems like SeaWorld and its CEO Joel Manby just cannot say enough bad things about sea pens -- or in official SeaWorld-speak, "sea cages" -- for their captive orcas and other cetaceans.

Environmentalists and scientists have been promoting the idea of large sea pens -- areas of the ocean, such as large coves, netted off from the ocean -- as a more humane and ecologically sound alternative to the current small concrete tanks that orcas and other cetaceans now live in, working every day to earn their food. SeaWorld and other aquariums use food to induce whales, dolphins and seals to do their tricks for the public. If the captive does not do the trick correctly, they don't eat. They must be kept hungry, or they ignore their trainers.

In response to reporters about the news that the National Aquarium in Baltimore was planning to retire their eight dolphins (including seven bred in captivity) to a sea pen sanctuary in Florida or the Caribbean, SeaWorld made the statement:

"While some may use today's announcement to continue to call for the release of our orcas to sea cages, our point of view has not changed. Sea cages for our whales are high risk. Most of our whales were born at SeaWorld, and the best, and safest, future for them is to let them live out their lives here, receiving top care, in state-of-the-art habitats, safe from pollution and the other environmental threats they would face in our oceans."

Then, during an online meeting with shareholders, SeaWorld CEO Manby stated:

"We have the utmost respect for the National Aquarium. We certainly know they're going to take into account what we think are some health challenges of taking dolphins born and raised in an aquarium and placing them in an unfamiliar ocean environment, but having said that, we know they intend to pursue this experiment in a very mindful way and to monitor the health of their dolphins as they move them."

CEO Manby later doubled down on his disdain for sea pens:

"Could it be done to move whales to sea cages? Yeah, it technically possibly could be done. But is it the safest thing for our animals? We do not believe it is."

Yahoo Finance shows SeaWorld stock plunging another 68 cents per share (4.48%) and is issuing a Strong Sell recommendation for SeaWorld. We believe at least part of the reason for the decline is SeaWorld's continued refusal to retire their orcas and dolphins to sea pens. 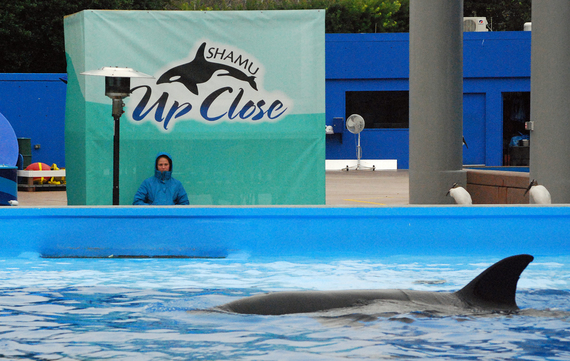 Sea pens have been used for years to hold cetaceans in captivity. One example is the US Navy, which just a few klicks from SeaWorld San Diego has a large number of bottlenose dolphins and sea lions in sea pens, exploited (unfortunately) for defense purposes.

The proposals for sea pens by scientists and expert marine mammal trainers (some from SeaWorld itself) are aimed at providing the best care available for orcas and dolphins while giving them much more room and a much less sterile environment than the concrete tanks that SeaWorld and other aquariums use.

And how can they seriously suggest that well designed sea pens pose any threat of pollution or other "dangers" to dolphins and whales? These animals have adapted through thousands of years of evolution to thrive in their oceans homes. Small concrete tanks are not at all suited to these large, intelligent, and social sea mammals.

SeaWorld has criticized the Keiko release effort as being a "failure." Keiko was the name of the orca star of the hit movie "Free Willy." The parts of the film with Keiko were done in his aquarium home in Mexico City. Conditions there were poor, with artificial seawater and very tight conditions, and Keiko contracted a skin infection as well as poor muscle tone and the telltale droopy dorsal fin, characteristic of captive orcas but rare in the wild.

At the behest of Warner Brothers films, Earth Island's International Marine Mammal Project formed the Free Willy -- Keiko Foundation to rehabilitate and release Keiko. After moving Keiko to a large state-of-the-art tank in Oregon to cure his skin problems and build up his strength, he was then flown to his home waters of Iceland. Keiko lived for about five years in Iceland, spending his days, without the circus performances, in both large sea pens and the open Atlantic Ocean, eventually swimming to Norway.

Keiko was the first captive orca whale ever returned to his home waters, a historic first. He lived out his life free of the stresses and dangers of life in a concrete tank.

His death was indeed unfortunate, but what SeaWorld's Manby and the rest of the captivity industry don't say is that while the International Marine Mammal Project and the Free Willy -- Keiko Foundation were rehabilitating Keiko and bringing him back to his home waters, 17 captive orcas died in aquariums around the world. Sea pens look a lot better when one considers the hidden death records of aquariums for their captive orcas.

Manby and other critics also fail to mention that SeaWorld and other aquariums rejected bringing in Keiko to their facilities, leaving him to die in a small Mexico aquarium until the International Marine Mammal Project and the Free Willy -- Keiko Foundation efforts saved him and brought him back to health.

When Keiko died, he was the second longest-lived male orca ever kept in captivity at that time.
So sea pens can be a healthy alternative to keeping captive orca whales and dolphins alive and healthy, far more so than the constraining and sterile environments provided by small concrete tanks. SeaWorld should reconsider their active opposition to sea pens and should work with scientists, trainers, and environmental organizations to establish sea pen sanctuaries to retire their orcas, beluga whales, and dolphins.

Unlike sea pens, SeaWorld's argument against them doesn't hold water.

For more information on the Keiko project, click here.