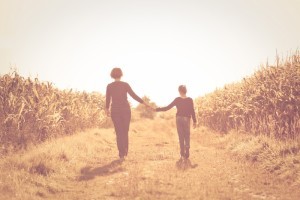 Unlike a lot of mothers in my suburban community I have no problem talking to my kids about sex. In fact, I'm very comfortable talking honestly, openly, and nonjudgmentally about it.

I was raised by a stylish diva Mom of the "Mad Men" era, twice divorced, slightly embittered but unequivocal when she told me flatly "Sex is the one thing a man can give you that will make you happy." Female orgasm was an act of pride and rebellion, it was her brand of feminism. "The whole world is geared to satisfy men and you need to make sure they satisfy you."

This is what informed how I educated my daughter about sex, although my tutelage was far from embittered--because sex, love, and relationships have always been a highly satisfying part of my life. I write about my sex positive philosophy in my recently published memoir "Wide Open" my journey of balancing romantic love and family life. "Sex as danger" was never part of my message. Like getting good grades or eating healthy foods, my style was instructive and even humorous.

Educating my children on sex, love and relationships is a crucial part of what I consider good parenting. It's right up there with keeping them out of danger, teaching them to respect the environment, and making them responsible for their own actions (along with doing their own laundry and 30 minutes of reading a day).

But there seems to be a pervasive fear that talking about sex will encourage teenagers to have sex. I think just the opposite is true. The Netherlands, Germany, and France have the lowest rates of teen pregnancy and sexually transmitted diseases among teens. These three countries have exemplary sex education and government programs that allow easy access to contraception. Knowledge and education facilitates wise decisions.

The United States has one of the highest teen pregnancy rates in the Western world. According to Advocates for Youth, since 1997 the US government has subsidized over $1.5 billion dollars in abstinence-only programs that exclude crucial information that could prevent teen pregnancy and STDS. Until recently, these "sex as danger" programs promoting abstinence were the only sex education classes eligible for federal funding. But researchers at the University of Washington found that comprehensive sex education was associated with a 50 percent lower risk of teen pregnancy compared to an abstinence-only program.

Given the puritanical roots of the United States, these statistics aren't surprising. But I live in one of the blue states, where the "sex is dangerous" dogma is on par with the ideology that humans lived among dinosaurs. I expected a sex-positive attitude from others parents. Not so. In kindergarten my daughter asked me the inevitable "where do babies come from?" I responded with a simple description suited for a five-year-old. My little girl became the source of sex education for her kindergarten pals. When her best friend told her mother about "the sperm and the egg," this little girl's mother called me up and stated flatly, "I don't want my child thinking about sex."

Developmentally kids start asking basic questions about sex as early as three years old. Making the subject verboten puts kids and teenagers at risk. What is forbidden and mysterious often becomes cause for rebelling. I have several friends whose parenting style I respected in the elementary school years but as their children became teenagers their parenting started leaning toward surveillance, policing, and control.

My daughter's friends are polite and affable. They are also curious and hungry for frank information on life. They need guidance with empathy--not lectures or policing. Often I am a quiet observer and neutral ear for their challenges.

One of my close friends is in complete denial that her daughter is having sex. This young girl became sexually active at 13, an age I think is way too young. When I asked this mother why she didn't talk to her daughter more about love and sex--she said "She'll have to learn the lessons on her own."

At 14 my daughter got her first boyfriend. We discussed birth control. My daughter was very candid that she was not ready to have sex--which I was glad for. As their relationship developed she felt pressured. Her boyfriend is a great kid--and yet I think we can all agree that testosterone is one wily ride. To quote Xander from Buffy the Vampire slayer "I am a 16-year-old boy--linoleum turns me on."

After further discussion, the issue seemed to be not that her boyfriend was truly pressuring her, he wanted to respect her boundaries, but given both their levels of sexual inexperience they didn't know how to pleasure each other. His idea was penetration--understandable, given that biology has the dominant power to make compelling suggestions. After all isn't testosterone's function to fill the earth with babies? I felt empathy for both my daughter and her boyfriend. I explained to her that the learning curve at this age in terms of your body, your boyfriend/girlfriends body, what you are feeling, and what you need is huge! Then I coached her about several ways she and her boyfriend could pleasure each other without penetration or risk of pregnancy.

I am happy to report that at 15 my daughter is sexually satisfied but still not having intercourse. By the way, her friend from kindergarten whose mom lambasted me for teaching my kid the Birds and the Bees started having sex at the tender age of 13. I can't say I was surprised.

My daughter is doing great academically, socially, and also exploring the fine art of living well. Which undoubtedly must have pleasure on the menu because from an evolutionary perspective we are hardwired to want sex when we reach puberty. It's time parents stopped portraying sex as dangerous, emotionally and physically, and start telling the truth about the pleasures, emotionally and physically, within a context that includes safety and maturity.

Gracie X is the author of "Wide Open: Loving on My Own Terms" . You can e-mail her at GracieX.com

More:
Parentssex positive parentingteenagersparenting teenagers
Newsletter Sign Up
Raise the kind of person you'd like to know
Subscribe to our parenting newsletter.
Successfully Subscribed!
Realness delivered to your inbox