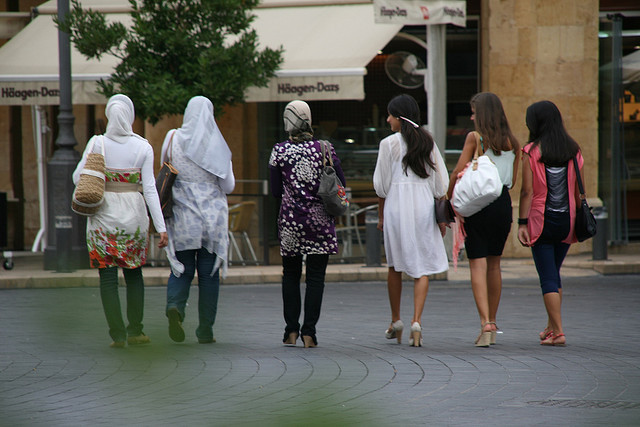 Anyone who has ever taken a Middle East Airlines flight to Beirut will have seen it. Shortly after takeoff, before the churn of Hollywood B-movies whirs up, passengers are treated to a short promotional film extolling the beauty of Lebanon. Soon enough, themes emerge.

Come to Lebanon, where the nights are hot and frantic, the ruins old and mythic, and the women are big-breasted and half naked.

It is true, then, that the Tourism Ministry's advertising team has ascribed for several years to the lazy promotional mantra that sex sells. More specifically, sex with women in a country where decency and sobriety laws are applied far less stringently than surrounding Middle Eastern states sells. And men have always bought.

Lebanon has long been the sexual playground for men from the Gulf to come and indulge in some earthly pleasures, free from molestation from their countries' religious enforcement agencies. One head of a Lebanese gender equality charity maintains that Lebanon's tourism drive, born out of a need to heal devastating economic scars hewed during 15 years of civil war, was deliberately centered around the regional stereotype that Lebanese woman are at most sexually promiscuous, at least viewable in a bikini.

The latest effort from the Tourism Ministry, "Lebanon Blues," in which a recent visitor to Lebanon struggles to shake-off images of scantily-clad women encountered during his trip, should therefore come as no surprise.

There is an argument to say there is little wrong with a country using its natural assets (Lebanon is still poor in resources, and will remain so until the government can agree on what to do with natural gas and oil reserves in the east Mediterranean) to boost its economic draw. As long as the women in the commercial are consensual, what is wrong with flashing their flesh to promote Lebanon? After all, plenty of countries flaunt their female beauty stocks in a bid to draw beach-dwelling binocular users to their shores.

Not plenty of countries, however, display the same level of hypocrisy by on one hand encouraging grabby men to come and ogle their women while denying those same women basic rights enjoyed by men.

Lebanese women are still barred from passing their nationality on to their children. All Lebanese are therefore their fathers' offspring, not their mothers'. There are still no robust legal mechanisms to guarantee against the use of domestic violence against women. Under article 562 of the Lebanese penal code, it is permissible for a man to kill his wife in a "moment of passion" if he catches her being unfaithful. Sex workers have no protection in the courts.

A so-called "decency" law is currently being considered by parliament, which would fine any woman who crossed the arbitrary (and male-defined) line of not wearing enough clothes.

The latest campaign from the Ministry of Tourism is therefore not only discriminatory. It is slovenly and ignorant and delusional. Women, or men, cannot be generalized in any country, least of all one which likes so obviously to pander to xenophobic and perverted views of its female citizens while continuing to breezily ignore their rights.

The ministry, as well as the complicit government, is guilty of publicizing an offensive assumption which flies in the face of the shocking neglect and chauvinism it perpetuates.

As one activist put it: "What more proof do you want that every single member of a government that gave this advert the OK is basically perverted?"

Journalist and writer focused on the Middle East. Reported for five years for a variety of publications from Beirut and Cairo.