What is shame? You know, those awful feelings of not fitting in, not belonging, and being horribly wrong. If you are a human, I'm sure you know what I mean. Why does shame suck? Shame is a useless, no good feeling. Shame holds us back, keeps us small, and deters us from being the very best people we can be. Shame hurts, and it's completely unnecessary.

But isn't shame needed to shape the behavior of the young and get the masses to fall in line? Well, no. You're actually thinking of guilt, which does the trick quite nicely. If I get that nagging, guilty feeling, that's my internal heads-up that I have done something wrong and need to change course, or correct my behavior. Shame is the feeling that I am wrong. This feeling is pervasive and feels unfixable. It also feels so bad, I assume I'm the only one who feels it and I am unlikely to share it with anyone, which is (ironically) the only way to mitigate shame.

Revolutionary shame and vulnerability researcher Brené Brown says the way to build shame-resilience as adults is to embrace it, share it, call on our higher-level thinking, and coach ourselves with positive self-talk. A method Ms. Brown learned in her research was to repeat the word "pain" over and over until you can breathe and name what happened as a "shame attack." This reframes the very real physiological aspects of the shame experience and creates space for better thinking. Then you can engage in self-talk that sounds like, "You screwed up, but everyone makes mistakes sometimes. You're going to be okay," instead of, "You idiot -- I can't believe you screwed that up. You never do anything right!" (If you have a few minutes, you can hear tips right from Brené here.)

Children are especially vulnerable to shame. Self-centered and dependent, young humans will easily translate, "You did something bad," into, "You ARE bad." We need to be aware and careful about the messages we send.

I have a memory from when I was about 5-years-old; I asked a babysitter for something to eat. Apparently, when I made my request, I forgot to say please.

"What's the magic word?" she asked in an annoyed manner. I stared at her, embarrassed that I didn't know. I don't recall how many times she asked, or how long I stared, but I do remember the searing shame once I realized that: a) I hadn't known what the "magic" word was, and, b) I had forgotten to say please.

Just an earnest, people-pleasing Kindergartener, I was mortified and already busy condemning myself for an honest blunder. At such a young age, I was completely unable to chant "pain" to myself until I could think clearly, or know that my value did not depend on the irritable woman who was in charge of me. I did what all small children do in this scenario: I internalized the message that I was a screw-up. (To read about my strong opposition to prompting children this way, click here.) 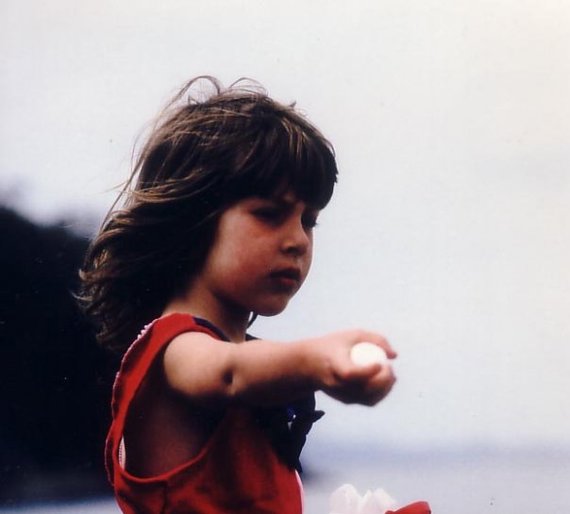 I try to be abundantly clear with children that they are loved and accepted unconditionally, even when their behavior is terrible. It is way too easy for kids to slide directly into feeling worthless via shame. In her groundbreaking book, Daring Greatly: How the Courage to Be Vulnerable Transforms the Way We Live, Love, Parent, and Lead, Brené Brown wisely states, "(W)hen it comes to our feelings of love, belonging, and worthiness, we are most shaped by our families of origin -- what we hear, what we're told, and perhaps most importantly, how we observe our parents engaging in the world."

This statement emphasizes the importance of living this practice, and modeling compassion and self-acceptance for children. It is good, but not good enough, to refrain from using shame-based statements and parenting (and teaching!) techniques. We have to really walk the walk. We need to treat ourselves with kindness and love regardless of our imperfections.

After years wandering the self-help aisle and the kind guidance of a wonderful therapist, I am much less prone to shame-attacks, but they still happen, and I see evidence of them all around me. A major symptom is people's inability or unwillingness to admit they are wrong, or have made a mistake. They are drowning in shame so much, that they experience themselves as being wrong or a mistake. What a mess of problems that causes -- denial, blame, and lies -- to name a few. The result is a population of folks unable to recover from even minor setbacks.

Acceptance of differences and compassion for others and ourselves lies at the heart of shame-busting. We all want to feel like we belong -- despite our errors and differences. Children are quick to judge and condemn their peers, but that is mainly learned behavior. Denying parts of ourselves in order to fit in is driven by the shameful belief that if we don't adjust and change in some way, we won't belong.

Our "golden rule" of treating others like you want to be treated epitomizes the profound human bias that we are mostly the same. I get that the goal of the rule is to bring kindness to your relationships. But the divide between, say, how an introvert vs. an extrovert would like to be treated, could be vast. It is great to focus on what we do have in common, but let's not eradicate our differences in the process. Aim to also celebrate when we don't have common views.

Sometimes they are big differences; like race, religious views, or a deeply held cultural belief. Other times it's a small thing; like a distaste for licorice, the preference for A/C over rolled-down windows, or the notion that the word, "please," can be magic.

A version of this article was originally posted as: I Wish I Had a Shameless Childhood at Role/Reboot