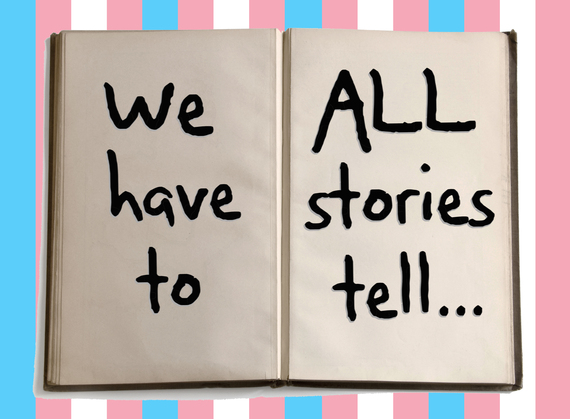 When I first started looking for information and support to help me understand my transgender child, only a few online voices and websites provided a parenting perspective. At that time 14 years ago, the word "blog" had just been born, and blogging was not yet a widespread communication phenomenon. But today there are many great resources available online and elsewhere. Sadly, there is also a lot of misinformation, fear, hate and ignorance surrounding this topic.

Recently there has been a rapid shift in our national culture toward acceptance of and equality for gay and lesbian people. The Supreme Court has ruled that marriage equality is now legal in all 50 states. It has often been said this acceptance is in part due to the fact that most Americans now know someone who is gay. (A recent Pew poll puts that number at almost 90 percent.) But transgender people do not have that same degree of visibility and acceptance, yet.

When I tell people my youngest child Amaya is transgender, I often hear about how lucky he is to be living is at this time, or how this is the perfect time to be transgender. It is certainly true there is more attention given to trans people now more than ever, and transgender people are slowly becoming more visible in the media and in our lives. Recent media coverage of celebrities who have come out certainly has helped shed light on the presence of trans people in our midst. However, a recent Harris poll showed that only 16 percent of Americans know someone who is transgender. And yet, the statistics also hint at a significant shift: while only 9 percent of respondents over age 45 said they know someone who is transgender, 27 percent of Millennials know at least one trans person.

With this in mind, I share my story as a parent of a trans child because my child's life depends on it. There are still many people in America who are ignorant and fearful, of trans people, often simply because they have no direct experience with anyone who is transgender. Among the impacts of this ignorance and fear to transgender people and their families today:

"I can't tell you how much this means to me. Just to have someone to talk to who understands... it's priceless. Thank you! I just stumbled upon Ally Moms via a shared post on Facebook and what a fantastic and vital resource this is!"

Ally Moms was founded by Roz Keith, a blogger who is mom to a transgender child. I am a proud member of Ally Moms and our mission is this:

"We are a group of moms who have come together because we have a transgender child. We live all across the United States, Canada and the UK. Our children are different ages and at different stages along their journeys. Some are just beginning to transition, some are living authentically as adults already. We come from different backgrounds and none of us have actually met (yet). What we have in common is an unconditional LOVE for our children. We are allies to the transgender community. What we can offer is a kind word, a loving, virtual hug, or perhaps a suggestion or two. We will not judge."

My son tells his story too. He has been in the same school district with the same kids for his entire life, and came out to his friends in his freshman year of high school. He was interviewed for an article in his school newspaper about San Francisco Pride during Pride Week in his junior year in which he was quoted openly discussing what it means to be transgender. Amaya also was interviewed for a college research paper focused on what it means to be transgender. His boldest step was to share his experiences about transitioning for a BBC documentary hosted by Louie Theroux.

I share our story because the fight has real stakes. Lawmakers in several states (most recently in Indiana) continue to propose legislation intended to fine and imprison transgender people who use the "wrong" public restroom, even going as far in some proposals as to require transgender people "to prove their chromosomes before being allowed to access bathrooms."

I share our story because transgender people continue to be fired from jobs and denied access to medical treatment they need. Transgender people, specifically trans women, risk being murdered at one of the highest rates in our nation. In 2015, the transgender homicide rate in the U.S. reached an all-time high. Until there is equality and justice for all people regardless of gender or sexual orientation, I will continue to be a voice for my child and for all transgender and gender non-conforming people.

When asked recently about transgender rights and what he sees as next steps, Amaya said, "The only way we as a society can help move the transgender movement in the right direction is to educate ourselves and spread the information we've learned to help educate others." That's my kid, always teaching me.