If we can learn one lesson from the passing of Lonesome George last June, it's that in order to fix the societal issues that led to his extinction, we need to start at the root of the problem and begin making completely different choices. As a society, for many decades, we made decisions based on short-term benefits. We became addicted to instant gratification and rationalized it by convincing ourselves that, because we saw immediate results, it was somehow alright. We are playing with fire when instead of looking to build a strong foundation from the start, we layering many short-term decisions upon one another, creating a wobbly, unstable present.

What we're trying to do differently at Lonesome George & Co. is to think long-term. How can we utilize these lessons we've learned to make a positive footprint on the world around us? From the beginning of our supply chain all the way to the communities we impact by creating Agents of Change -- we are looking wide-eyed at the big picture. Through the Academy of Agents of Change, which is funded by our apparel sales, we synergize Outward Bound and Ashoka programs to create a powerful launching pad that equips social entrepreneurs with an awakened mindset and the tools to make a sustainable, long-term difference in their communities.

Our model is unique and focused on the future. We're often asked, "How do you know you're having an impact?" Truth is, it's not easy. But if you can simply see that one Agent of Change in the Galapagos will have a positive effect on his or her entire community, the impact becomes very clear. Many companies are spending their time putting "Band-Aids" on issues. Some are having an immediate impact, but all too often it's fleeting. Our goal, simply put, is to measure success by how each individual graduate creates change in the community. We're working from the ground up, building a strong foundation. These solution-driven leaders have a deep understanding of their surroundings and often come to us with an idea, a vision of what they'd like to do to make their world a better place. We're simply a catalyst, helping them turn their dreams into reality in the best way we know how.

We began this journey to ensure that another Lonesome George situation does not happen again. We believe every one of us has the power within to shift to long-term thinking while making systemic, replicable, and sustainable changes within our own communities. Ultimately, by empowering a new generation of Agents of Change with the ability to identify and rectify problems instead of symptoms, we are building an army. That army's collective mind will be firmly fixed on thinking differently and making choices that do not lead to the extinction of resources, cultures, or wildlife. That, to us, is success. A healthier planet is filled with a powerful network of circular thinkers, folks who are not looking for the quick fix but are willing to put in the work for the long view. 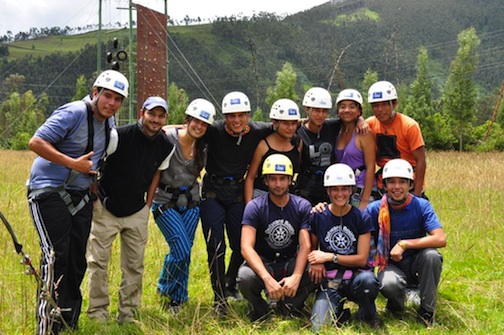 Become an Agent of Change, learn more at www.lonesomegeorge.net and follow Lonesome George & Co. on Twitter @LoneGeorgeCo and Facebook/LonesomeGeorgeCo.