As pressure builds toward Thursday's "bipartisan" presidential summit on health care reform, some Capitol Hill staffers have reported receiving calls from the White House claiming the president's ready to give up the legal rights of medical malpractice victims for GOP support.

What's wrong with the trade-off? LA's local NPR talk radio host, Larry Mantle of KPCC's Air Talk, asked me yesterday in a midst of a debate about Obama's new health care reform proposal, which appropriately did not mention any changes to medical malpractice accountability. So I told Steven Olsen's story. 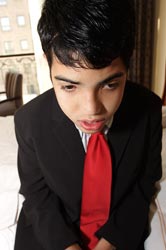 Yesterday happened to be the 20th birthday for Steven Olsen, whose tragic story at the age of two years old deeply touched me and every one who ever heard it. Steven and his terrific parents, Kathy and Scott, will be at the White House next Monday to stop the president from using innocent patients as a bargaining chip to get Republican votes. If President Obama personally spends a few minutes with Steven, it's hard to imagine how his conscience will let him sell out the rights of injured patients for Republican votes.

At 20 years old, Steven Olsen is blind and brain damaged. He will never live a "normal" or independent life because, as a jury ruled, he was a victim of medical negligence when he was two. Steven was hiking in the woods with his family and fell hard on a stick, which punctured his sinus. Under the family's HMO plan, the emergency room doctor pumped Steven up with steroids and sent him away, although his parents had repeatedly asked for a CAT scan because they knew Steven was not well. Steven returned to the hospital hours later comatose.

At trial, medical experts testified that had he received the $800 CAT scan, which would have detected a growing brain mass, Steven would have his sight and be healthy today. The jury awarded $7.1 million in "non-economic" damages for Steven's avoidable life of darkness and suffering. The jury, however, was not told of a two decade old restriction on non-economic damages in the state. The judge was forced to reduce the amount to $250,000. It's this one-size-fits-all damages cap, unchanged for inflation after 35 years, that Republicans are recommending for America now.

The jurors only found out that their verdict had been reduced by reading about it in the newspaper. Jury foreman Thomas Kearns expressed his dismay in a letter to the San Diego Union Tribune.

We viewed video of Steven, age 2, shortly before the accident. This beautiful child talked and shrieked with laughter as any other child at play. Later, Steven was brought to the court and we watched as he groped, stumbled and felt his way long the front of the jury box. There was no chatter or happy laughter. Steven is doomed to a life of darkness, loneliness and pain.

He is blind, brain damaged and physically retarded. He will never play sports, work, or enjoy normal relationships with his peers. His will be a lifetime of treatment, therapy, prosthesis fitting and supervision around the clock...

I think the people of California place a higher value on life than this.

When in San Diego, I often visit Steven and his family. Kathy is on the board of Consumer Watchdog, the consumer group I work for. Their struggles are unfathomable to me. At last count, in one year, Steven had 74 doctor visits, 164 physical and speech therapy appointments, and three trips to the emergency room. And his parents say that was a good year because Steven was not hospitalized.

Steven's mother Kathy had to leave her job because caring for Steven is a full time job. For years she fought with the school district for Steven to receive special education classes. Now the family is planning for when Steven turns 21, and the school district no longer covers his education. They will have to find a way to pay themselves out of the reduced damages that the jury never knew had been reduced. Steven will receive social security disability and Medicare, but it won't be enough to take care of him for his life, after his parents are gone.

If Obama decides to give up the rights of the Steven Olsens of the world, then he will be engaging in a dangerous triangulation that brought us, under the Clinton-era, the decimation of public assistance programs for poor children, the felling of Depression-era walls between financial institutions that the president is currently trying to resurrect, and other treats from Dick Morris.

Our young president has yet to show his personal connection to the public and their pain in a way that will allow him to sell health reform and push it through the Senate using reconciliation with the power of populism behind him. It's this compassion for the public, for patients like Steven Olsen, that Obama must display at Thursday's summit to win reform. The president doesn't need to throw injured patients under the bus to move reform along, he needs to prove that he really cares about rescuing patients, and his plan is not politics as usual.

The best hope for health care reform yet has been the outrageous 39% increase in premiums by Anthem Blue Cross of California, which has captured the national debate. The president wisely included a call for tough premium regulation in his new plan. The bipartisan issue is insurance company greed and the public is getting on board with the president because it understands that no one can survive such premium increases without the government's help policing the market.

At a lunch with a Congress woman yesterday, she said the Democrats understand Anthem's mistake is their opportunity but they worry Obama isn't connected enough with the public to make his case in a way average people understand. He is too ivory tower.

The traction on the Anthem increase is the clearest sign yet for Obama that the road to reform is not about taking innocent patients' rights, but regulating insurance companies. That's something he should be able to get passionate about, not hurting patients like Steven Olsen.