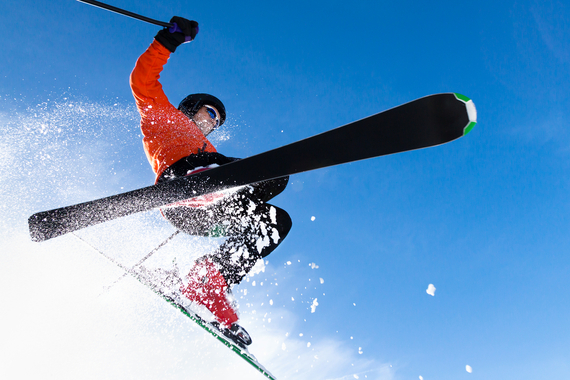 Skiing is a phenomenally exciting and fun sport. However, the injury rate is relatively high, with numbers from 2008 saying that an estimated 20,000 knee injuries are sustained each year by skiers in the U.S. alone, most of which involved the ACL. The question is why and what can you do about it?

My advice on how to avoid common injuries is based on my 55 years of skiing, more than two decades of being an orthopaedic surgeon for the U.S. Ski Team, the Pro Ski tour, the Jeep Tour, 48 Straight Ski tour and other winter sports events. However it is not gospel. There are many views and disagreements on skiing safety.

Here's what I recommend:

Start in the Spring: Train for skiing and all sports by developing a total body fitness program. Focus on the 10 attributes commonly associated with fitness today: strength, agility, balance, proprioception, cardiovascular-respiratory endurance, stamina, flexibility, power, coordination and accuracy. Continue your exercise program during the ski season, working out daily.

Warm up in the Morning: The hot tub and hot showers help loosen the muscles. Stretch there. Get ready to ski by maximizing your flexibility. Injuries occur to tissues that are stretched beyond their normal limit. You can decrease these injuries by increasing your flexibility every day.

Tune Your Gear: Ski bottoms and edges are not just for going fast, but also for carving turns. The carve controls the speed in all terrains. Today's wide skis are fortunately becoming narrower in the waist creating a better turning radius and angle to permit a return to the elegant carving technique that skiing has been based on for the last 50 years. However, poorly sharpened edges and sticky rough bases cause the skis to catch edges and throw the skier into the trees, or worse.

Understand DIN: The DIN settings on your skis were designed to prevent pre-release, originally because ski racers suffered bigger injuries if they unexpectedly came out of their skis when traveling 70 mph. Most of us would rather release more often than not as we are skiing at controlled speeds in predictable environments. So don't set your DIN settings above the minimum recommended levels unless you are on cliffs or fatal fall environments. I see more ACL injuries from patients who tell me their bindings did not release than I do from people who pre-release because most people are not out on the hairy edge. Unfortunately, many people think a higher DIN setting is more macho. Wrong.

Boot Up: New ski boots actually matter. Most people ski their boots until they fall apart. Unfortunately, the fit declines as the boot compresses. Having a great fit permits you to control the ski. Gear mismatches cause the unexplained injuries, such as when the skier thought they could execute a turn and just didn't make it.

Go Strapless: You will never find an orthopedic surgeon using the straps on their poles when skiing. One of the most common skiing injuries is called skier's thumb or tearing of the ligament at the base of the thumb from falling with the ski pole in hand. I cut my straps off. I recommend you do, too.

Ski the Sweet Spot: Most days have ideal times to ski. The snow is good, the weather favorable, you are well fed and confident, the legs have energy. Most days have the opposite for some part of the day. The key is to ski when the energy and environment is flowing and to quit when it isn't.

Skiers get hurt for reasons that could be diminished before they ever hit the slopes. If you don't want to "hit" the slopes, follow the advice above and I'll see you smiling, cruising down the mountain.