The more I live here, the more I realize that China is a force to be reckoned with.

For me, as an expat living in Xi'an, China, it's the people who really intrigue me. Who are they? What makes them tick?

Whether I'll ever really know, remains to be seen... in the meantime, it's a lot of fun trying to work this nation of 1.3 billion people out!

A visit to Ikea in China -- the world's biggest furniture supplier is a classic case in point of watching locals at play. 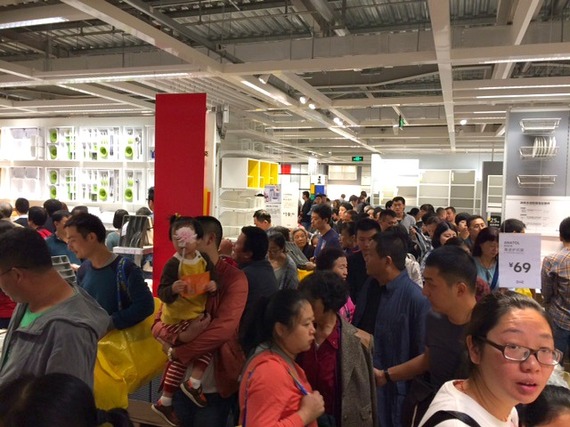 Entering the store is like entering a vortex and if you've ever been to Ikea (anywhere in the world), you'll know once you're in, there's only one way out, FOLLOW THE ARROWS!

It was Sunday afternoon and as you might expect, it was chaos. Cars, motorbikes and trikes all making a beeline for the place many have come to call their second home.

There are trolleys everywhere and I note they are being maneuvered in much the same way cars are driven on the roads -- on full throttle, powering ahead!

But beware they may stop, dead in their tracks at any given moment. Usually in the middle of the road (or aisle as it may be). Sometimes two or three trolleys at a time, their drivers stopping for a chat. There will be no indication this sudden stop is about to take place; just like the cars, the trolleys are being driven dangerously close to one another. Our Small Person has begged for a ride in the trolley, I firmly tell her to keep her hands in, at all times! One side swipe and we're clearly cactus!

Looking around, there are people parked (literally) in every nook and cranny. Ikea stores are built extra large in China and it doesn't take me long to work out why. Of the ten biggest Ikea stores in the world, eight are in China! 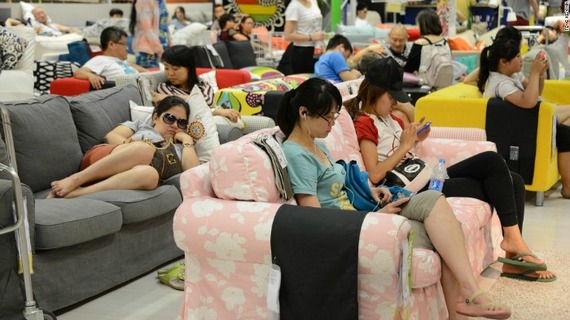 For the thousands making their way through the store's mock-up homes, this isn't just a Sunday chore, where you get in and get what you need and get out, hoping to God you can assemble the dam thing once you get it home. This is a serious outing! Search 'Ikea in China' on the internet and it doesn't take long to confirm that I haven't been submerged in some farcical dream. Here, many locals treat a trip to this Swedish furniture supplier as an all-day event that includes shopping, eating and most importantly, relaxing! 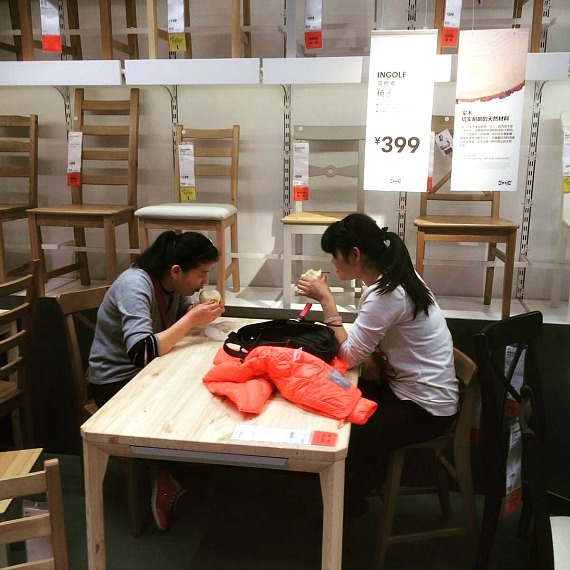 True to form, I spy a couple of ladies -- clearly friends, who've decided, why wait until they hit the cafeteria, it's BYO lunch, brought out and opened -- on the display table -- which is covered in tags hanging off both it and the surrounding chairs!

We move forward, battling our way through the traffic, around a few bends and we reach the lounge chairs followed by the bedroom section. Well... say no more! This is clearly where it's at, the hot spot to see and be seen.

This, my friends, takes testing furniture out to a whole new level!

There are people splayed everywhere! On the beds they are lying, legs stretched out, chatting on their phone or chatting to each other, or simply getting some well earned rest!

Other couples are canoodling, one man gently rubbing his partner's head while she's having a much needed lie down.

If there are no beds available, don't worry, grab a couch and a few pillows to snuggle up with (after all, this furniture testing is tiring work). 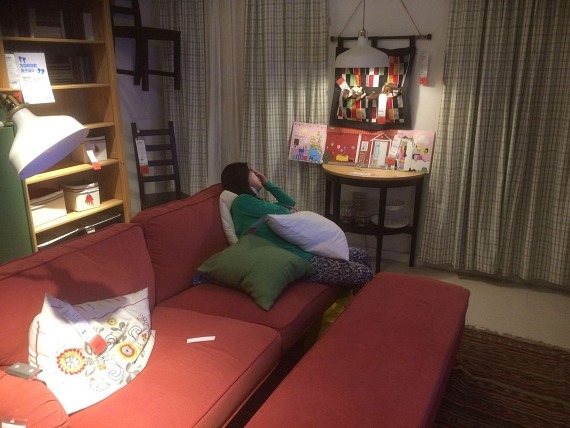 As we cruise through, I try not to let the alarm show on my face... but as I feel several pairs of eyes on us, the foreign family sauntering through the slumber party, I can tell they are almost as intrigued as I am. Probably wondering why we are not feeling the need to get cozy under the blankets.

Some people are feeding their children, after all they're in for a long day ahead. Others in the bathroom section are touching up their make up. While some just play house for a little while. 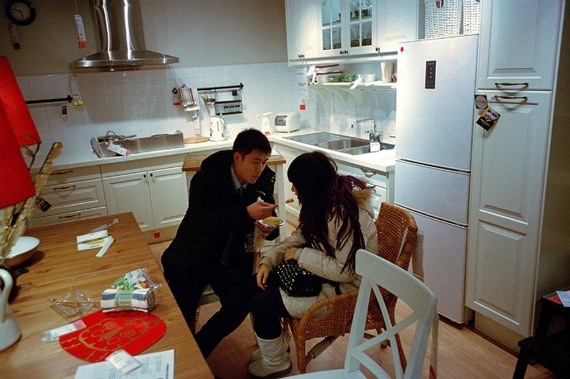 In the kids's toy area parents have set up a little play area, they're down on the floor with their toddlers playing cheerily and it's looking like a nice happy family scene at home, except well, we're in a shop.

Many are just kicking back in those fabulous lazy boy chairs.... sipping their flask of tea, probably enjoying the free heating on a cool winter's day.

About now you might be asking the question -- do they have any respect?

I've thought about this, a lot. While it often appears that way, it's a situation that is simply indicative of a nation where 1.3-billion people reside, all trying to survive. There's no time to think of the next person. In almost every aspect of China life, it's a case of 'survival of the fittest'.

Many homes cater to three generations under the one roof, all sleeping, eating and living in just one or two rooms. Privacy is not an option. 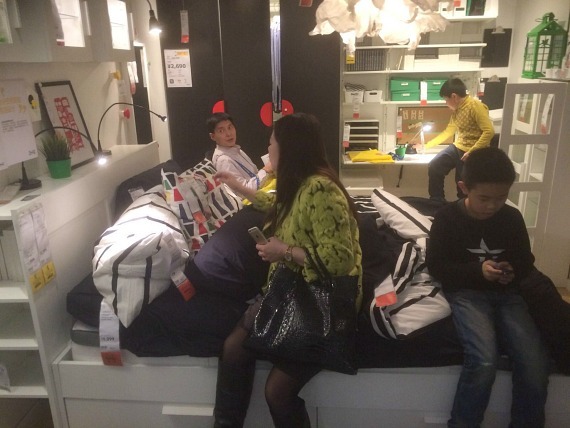 The furniture is probably more comfortable than they have at home and for many, snaring a spot on the plush double bed is probably a much better option than hanging at home for the day.

Until Ikea arrived in China in 2000 (and just a few months ago in Xi'an) there's never been anything like it in China, a place where locals feel like they can actually experience the goods on display for themselves.

In 2015, word got out that there would be a Great Ikea Crackdown in Beijing and Shanghai, stopping locals from lounging in the stores; despite newspapers spouting headlines like "Rude Awakening," Ikea clearly knows which side its bread's buttered on and power napping remains part and parcel of the China Ikea experience.

But, are they just chilling out for the day in this 'furniture theme park' or are they actually buying something?

For Ikea, China has been a tough market to crack. It took 12 years to make a profit.... but China is now the fastest growing market followed by Russia.

While in the past, locals haven't had the money to spend on decorating their homes, these days home ownership is growing at a rapid pace (much like the rest of the country) and people are looking to learn how to furnish their homes. Marketers say instead of the Chinese-inspired designs the company quickly learned, people here want the western experience.

While Ikea is seen as a mass produced, cheaper brand in developed countries, in China it's targeting that new growing middle class.

Ikea has such a following, couples have even tied the knot in the store. Yep, the showrooms providing a chic Swedish affair for a loved up couple in Nanjing.

Here, Ikea is not just a cheap and cheerful furniture store, it's a phenomenon where Swedish meatballs go down a treat with chopsticks!