Assuming you haven't been stuck under a large rock this week (or enjoying DC's new recreational pot law), you've probably seen headlines such as The President May Have Just Saved The Internet (Huffington Post) and Obama's Plan to Save the Internet (Business Insider).

President Obama just made a statement calling on the FCC to "implement the strongest possible rules to protect net neutrality," and suddenly everyone seems to be talking about this issue again.

Everyone, that is, except small business owners. (Cue the crickets.) Why does it seem that no one in the small business community is discussing or getting active about a policy issue that has the potential to seriously impact our livelihoods?

My first guess is that it's because we are simply occupied with concerns like making payroll, bringing in the next contract and, well... doing business.

Alternatively, some of us may not be sure what the term means. If that is the case, let's talk. Here is a quick-and-dirty definition to get you up to speed: The principle of "net neutrality" is, roughly, the notion that no person or organization should be able to pay Internet service providers (ISPs) extra money in order to cut to the front of the line and get their products, services, or ideas delivered to the public faster than anyone else. In other worlds, all data is created equal.

Because an environment of net neutrality is what we are used to, it's easy to assume that it will always stay this way and that all of us will be able to get whatever content we want, whenever we want it. The problem is that there is currently no legal structure in place to keep the Internet free and open to all alike, and ISPs are chomping at the bit to start charging those with lots of money as much as they can for the privilege of using the "fast lane" (I don't need to tell you what lane that will leave the rest of us in).

So, no matter how busy we all are, as a community we need to make time to get informed and vocal about an issue that could have a very real impact on us. Let's look at an analogy from the "offline" world to drive the point home.

A Tale of Two Flower Shops

Let's say you own a flower shop and one of your competitors in the neighborhood is owned by a mega corporation. Imagine what would happen if the mega corporation could pay the department of transportation to keep the road leading to its store beautifully maintained, while allowing your road to fall into disrepair and full of potholes, with various roadblocks along the way. Someone in the market for some orchids would not want to put up with the extra time and hassle involved in going down that bumpy road to your shop. 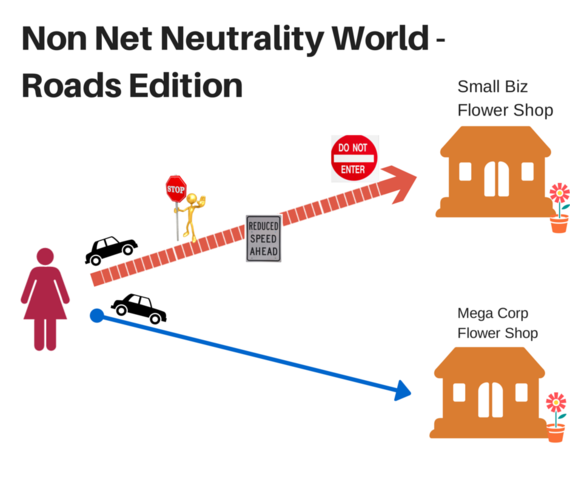 This scenario sounds ridiculous, because that's not how our roads work. They are considered a public resource that everyone needs to have equal access to, and so public money goes toward ensuring that they are all maintained equally. In fact, one reason the president's announcement made news was that he proposed legally reclassifying the Internet as a public utility, which would mean it would be treated more like a public road or the telephone system, guaranteeing equal access as in the graphic below: 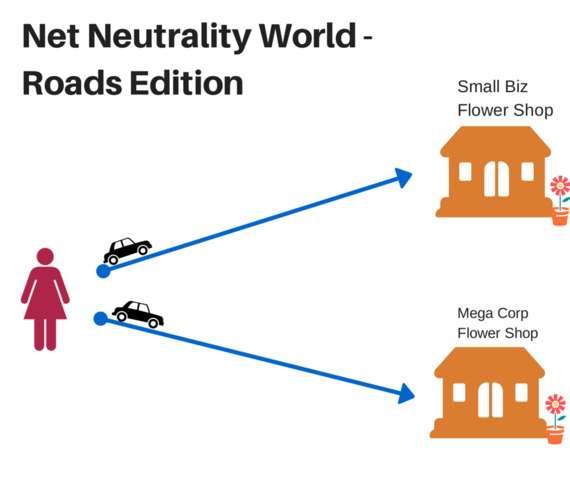 The end of the Internet as we know it?

In case you think I'm being an alarmist and that I need to spend less time sunbathing in my tinfoil hat, take a look at a recent battle between Comcast and Netflix as a preview of what a future Internet might look like. In 2013, Comcast punished Netflix for its refusal to pay a special "connection fee," by purposely slowing down, or "throttling," Netflix's stream to Comcast customers.

Once Netflix agreed to pay up in January 2014, its download speeds to Comcast customers shot way back up. Take a look at the thick black line below, which illustrates what Comcast was doing to Netflix service in the periods before, during (Oct '13-Jan'14), and after the dispute. (Looking at this chart, you can almost hear someone standing over a throttling machine and cackling, "You like your sweet data don't you?") 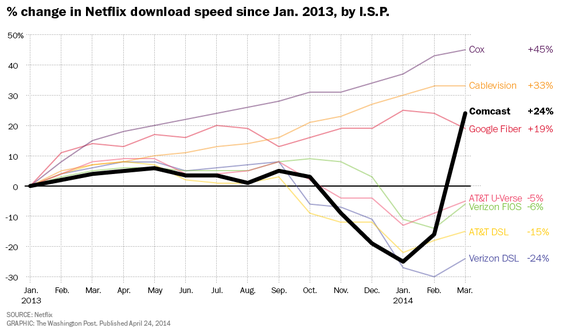 This is not a partisan issue!

Some Republican leaders in Congress have been loudly opposing the president's net neutrality plan, but neutrality is one area in which the leadership of the Republican party is out of step with the rank-and-file. Although Ted Cruz has been trying to demagogue the issue by comparing net neutrality to "Obamacare for the internet," the public isn't buying it. A recent poll found that 83 percent percent of conservative voters favored congressional action to prevent ISPs from charging more for faster access.

Let's make noise! Talk about this issue. Talk to your Congressman/or Congresswoman lately? This is a good issue to call about. What about your local chamber? Are they on top of this issue? Write a blog, type a tweet, send smoke signals, just talk about the issue so leaders know that we small businesses care.

This is still a live issue because at least 4 million people have left comments for the FCC about this. So many people went onto the FCC web site to comment on this several months agao that the site actually crashed. All this pressure is having a major impact on policy makers, but huge companies who want to benefit from a non-neutral internet are not going to go down without a fight. Click here to file a public comment to keep the Internet free and open equally, to all products, services, and ideas.

_______________
Erika Dickstein is a Web Strategist located in the DC metro area. She specializes in working with small businesses on creating strategic goal-oriented websites. You can connect with her at www.springinsight.com.