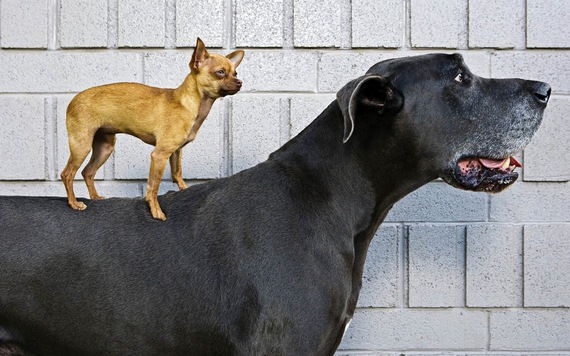 This is going to be a two-part post. In this first part, I want to share research that I have come across around why smaller teams are better than larger ones. In part two of this post, I will explore some strategies for how organizations can help make sure their teams avoid many of the traps mentioned below while keeping employees accountable, productive, and engaged. Let's get started.

Jeff Bezos has a rule at Amazon -- or perhaps more aptly -- a philosophy. If a team cannot be fed by two pizzas then that team is too large. The reasoning is quite straight forward and basic. More people means more communication, more bureaucracy, more chaos, and more of pretty much everything that slows things down -- hence why large organizations are oftentimes pegged as being so inefficient. When I first heard about the "two pizza rule," I thought it was a fascinating concept. So, I did more research on it and included it in my recent book on The Future of Work where I cited several pieces of research that I want to share with you here. As the title of this post suggests, smaller teams are indeed better than larger ones.

In 2013 Gallup released a report called "The State of The American Workplace." In it they found that smaller companies had more engaged employees. In fact, 42% of employees working at companies of 10 or fewer were engaged at work versus only 30% of employees at large companies. Now in this instance, these 10-person companies can easily be equivalent to 10-person teams.

Most people are not familiar with the Ringelmann Effect, which is the tendency for individual members to become less productive as the size of a group increases. This concept was named after Maximilien Ringelmann, a French professor of agricultural engineering who passed away in 1931. In one of his experiments he asked volunteers to perform a very simple task -- to pull on a rope. He found that when only one person is pulling on the rope they give 100% of their effort. However, as more people are added the individual effort goes down.

This experiment was recreated in the 1970s by Alan Ingham who came up with the concept of "social loafing," which helps us understand why the individual effort decreases as the team size increases. So why does this happen? Because it becomes harder to extract the individual contributions and performance of each person. So the individual rationale is "I don't really need to pull as hard because other people are contributing and nobody will really know how hard I'm pulling anyway." The same concept explains why many people don't vote, why bystanders don't take action when needed, or why some people within teams slack off.

Even further research by UC San Diego Professor Jennifer Mueller corroborates this. She introduced something called "relational loss." This concept describes how individuals feel as though the amount of support they get from others decreases as the size of the team increases. This is a very common feeling inside many organizations. How can one single manager possibly be responsible for evaluating and providing support to large groups of people? It's just possible.

Last, but certainly not least, we have another study that was conducted by three professors from UCLA (Staats), Penn State (Milkman), and Chapel Hill (Fox). In the experiments that these professors ran, they utilized LEGO bricks and two teams comprised of either two people or four people. The goal was to see which team could put together a certain LEGO structure together. By now you shouldn't be surprised to know that the team comprised of two people accomplished the task in 36 minutes. Whereas, the team comprised of four people finished the task in 56 minutes.

In the meantime, I'm curious to hear from you. How big is your team? Do you see issues with team dynamic and team size at your company? I love hearing stories, so share away!

Jacob Morgan is a futurist, best-selling author and keynote speaker, learn more by visiting The Future Organization.com or check out his latest book,"The Future of Work: Attract New Talent, Build Better Leaders and Create a Competitive Organization," on Amazon.