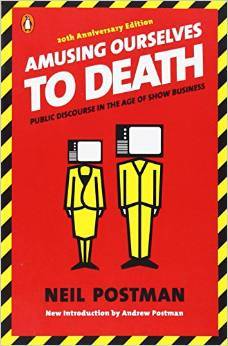 In 1985, Neil Postman published a book called Amusing Ourselves to Death.

Every once in a while, you read a book that completely changes the way you see the world.

Once (or maybe twice) you read a book that changes the course of your life.

This was one of those. The latter.

The premise of the book, (for those who have not read it, and I STRONGLY recommend that you do), is that the introduction of television would cause a complete transformation in everything we did, and not for the better. Television, Postman argued, was all about entertaining people, and thus, everything that went through that medium -- from politics to news to religion, would now have to become entertaining.

He used the example of political discourse: When Lincoln and Douglas debated for the U.S. Senate seat from Illinois in 1858, their debate went on for seven hours. Exposition, cross questioning, response and so on. And audiences sat rapt for all seven hours. Important issues were carefully parsed and examined. When we have Presidential "debates" today (and I use quotation marks), any answer that is more than 30 seconds is deemed boring. (Soon they will no doubt be limited to 140 characters -- such is our culture). And smart, snappy, witty responses are well rehearsed and practiced beforehand: "Sir, I knew John Kennedy and you are no John Kennedy."

Entertainment replaces discourse. It is, of course, everywhere now. And not for the better.

I was so taken by the book that I wrote to Postman. He not only answered my letter, he took me to lunch. Thus began a friendship.

I argued with Postman that even if the "televisionization" (if that is word) of America was inevitable, (and it was), then the only thing people could do was to not run from the medium, but rather to embrace it whole-heartedly. Smart people. Clever people. People with something important to impart. People like him.

This, in a way, became the seed that became the idea of Videojournalism.

Postman did not agree.

The thought the need to entertain, to amuse would exclude intelligent discourse from video.

I think he was wrong.

I still think he is wrong, though the evidence to the contrary (see The Briefcase on CBS) is all around us.

Sheryl Sandberg last week said that, in effect, video was the future for Facebook.

I am sure she is right.

Video is ubiquitous. It dominates the web and that is only going to continue.

"Video is eating the web" announces the Washington Post. In 5 years, 80% of the Internet traffic will be video.

Video is the lingua franca of the online world.

And that is why it is critical now that smart people embrace video and video literacy.

It can be more than cats in trees or cute pets.

But only if smart people with something to say learn the language.

And that language is more shooting selfies.

To this day I hope Postman was wrong.