Where's the inflation? It is barely rising, as consumers still wait for bargains before they decide to buy. The overall Consumer Price Index in April rose just 1.1 percent, and is up 2.1 percent less food and energy prices, which have been falling this year.

This is the major reason we saw just 0.5 percent GDP growth in Q1. It is the surest sign we are still in deflationary times, and the reason Janet Yellen's Fed doesn't want to raise short term rates further. We aren't growing fast enough to put everyone to work--which includes some 8 million that are either working part time, or have stopped looking for work--which is why so many have listened to Bernie Sanders or Donald Trump during the primaries.

Consumers sit on their pocket books when they believe prices might go lower, and job prospects aren't so good. It is also how Japanese consumers continue to behave, as do Europeans during deflationary times, which keeps their economies from growing faster.

The U.S. isn't as badly affected thanks to a very proactive Federal Reserve and the Obama administration $1.1T budget agreement that is pumping some infrastructure spending into public spending, as is the $305B Surface Transportation Bill that renewed the gasoline tax so that our roads and bridges could be repaired.

The new law, dubbed the Fixing America's Surface Transportation Act, or the FAST Act, formally reauthorizes the collection of the 18.4 cents per gallon gas tax that is typically used to pay for transportation projects, and also includes $70 billion in "pay-fors" to close a $16 billion deficit in annual transportation funding that has developed as U.S. cars have become more fuel-efficient. 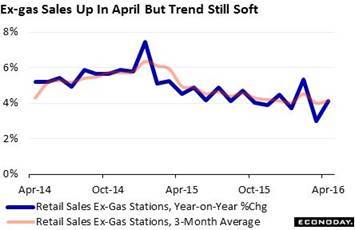 Retail sales also jumped, along with consumer sentiment in April. So we should see better growth this Q2. What is causing the spike in consumer sentiment? The U. of Michigan's consumer sentiment survey is absolutely soaring so far this month, up nearly 7 points to 95.8 for the mid-month flash, as we said last week. This is the best reading since June last year.

Retail sales surged in April a much higher-than-expected 1.3 percent for the best showing since March last year. The strength is broad based and includes auto sales which finally show some life for the first time this year, with a 3.2 percent monthly jump.

Nobelist Joseph Stiglitz has been pounding the table on what is needed for better economic growth. He says there is a deficiency in aggregate demand, a Keynesian formula that measures the overall demand in goods and service from government, capital investment, as well as consumer spending and exports.

"Today's markets are characterized by the persistence of high monopoly profits," says Stiglitz. "The implications of this are profound. Many of the assumptions about market economies are based on acceptance of the competitive model, with marginal returns commensurate with social contributions. This view has led to hesitancy about official intervention: If markets are fundamentally efficient and fair, there is little that even the best of governments could do to improve matters.

"But if markets are based on exploitation (i.e., monopoly power), the rationale for laissez-faire disappears. Indeed, in that case, the battle against entrenched power is not only a battle for democracy; it is also a battle for efficiency and shared prosperity."

So when the private sector won't spend--thanks in large part to the monopoly power of Big Business that has kept most of their record profits in the board rooms or on Wall Street, rather than investing in plants and equipment--government has to tax more of those profits in order that they be put to productive use.

So welcome to the popularity of Bernie and the Donald!