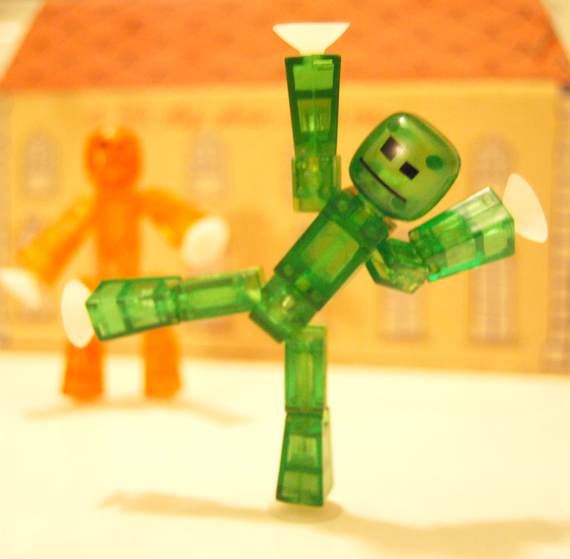 When most people think of animation, they think of the classic hand-drawn cartoons of their childhood or the more recent CGI style of "Toy Story" and "Madagascar." People often forget that stop motion photography--the process of starting and stopping the camera to create movement--is part of the world.

Television specials like "Rudolph, The Red-Nosed Reindeer" and movies like "The Nightmare Before Christmas" are two of the most beloved stop motion creations of all time. Unfortunately, the process of creating a stop motion film can be very difficult and time consuming. There was even an episode of "Parks and Recreation" where the character Ben's obsession with the process was explored.

To simplify the process Zing Toys created Stikbot, a DIY stop motion toy. Coming with two posable figurines and a smartphone tripod, the product gives would-be filmmakers a chance to dabble in stop motion photography. The actual movie-making process comes courtesy of an app, Stikbot Studios. According to Josh Loerzel, Vice President of Sales, the toy was designed to reflect the almost-innate comfort kids have with social media today.

"We recognized a trend of kids connecting more and more on social media and realized we could tie in this product's imaginative capabilities with it," said Loerzel. "Most toy designers either don't understand social media or try to incorporate it through traditional, outdated means. We made the social-sharing play-pattern central to Stikbot."

The play-plus-platform strategy seems to have taken off with this demographic. There are roughly 8,000 videos featuring the Stikbot toys on YouTube, with figures doing everything from the "Nae Nae" dance to battling robot monsters with Iron Man. With kids interacting with technology at an earlier and earlier age, this strategy might be where the industry is heading.

According to Common Sense Media Group, smartphone usage is becoming more common among children. A 2013 study shows that 72% of children ages 0-8 have used mobile devices to watch video or play games. Children in this age group who regularly use mobile devices also spend an average of 67 minutes daily using their devices.