He's a respected lecturer at the University of Southern California's Marshall School of Business; co-author of Tribal Leadership: Leveraging Natural Groups to Build a Thriving Organization, and The 3 Laws of Performance: Rewriting the Future of your Organization and Your Life; and in 2009 he delivered a TED Talk on Tribal Leadership, which has been viewed almost a million times. So imagine my surprise when I asked Dave Logan to explain his purpose, and he responded with this:

When I came up with the idea for My Year of TED in 2011, I knew it would include an activity on leadership, and that Dave Logan's TED Talk would be part of that activity. It was an idea that resonated strongly with me, and had always been one of my favourite talks. It spoke to that part of me that believes the role of a leader is to move people from one state to another, with as little pain as possible; and that hopeful part of me that believes we could be a better society - if we only had the right leaders.

Last year I had the opportunity to speak with Dave about his TED experience, tribal leadership, and whether he feels he is living his purpose. It was an insightful conversation, and a timely reminder for me to regain awareness of the language I use in my own tribes - but that wasn't my takeaway from the conversation.

For me, the fascinating theme that evolved from this interview was addiction + poor management = sucky organisations.

Dave on Tribal Leadership and Addiction
One of the surprising topics from the interview was the unexpected feedback Dave received from people working in addiction - you plagiarised the big book from Alcoholic Anonymous. Dave explains:

I had never read (it), I've never been to an AA meeting. I got the book, and I was stunned at how the entire system of AA was almost written as though one understood tribal leadership.

As he was outlining all of this for me, I was again struck by how universal this idea was. It spoke to a feeling I'd always had that the tribal leadership concept covers more than just tribal interactions. In relation to addiction, the five stages look like this:

Stage 1 - Life Sucks, is when you are drinking and bingeing
Stage 2 - My Life Sucks, is when you realise it's not life but you, and you start going to meetings
Stage 3 - I'm Great, is the stage that emerges around length of sobriety "I've been sober for 10 months", "Well I've been sober for 10 years", "Okay well then you win this one."
Stage 4 - We're Great, is the core value around respect and responsibility
Stage 5 - Life's Great, is about the idea that we could be in a world without addiction.

Striking a chord with many people about human interaction in general, Dave and his team have received a number of requests to write about the five stages for families, but they don't believe they have to credibility in that area to tackle it. What they do have significant credibility in is the world of organisations - specifically leadership and management.

Managers are all about "I'm Great"
From discussions with Dave during My Year of TED, I knew that he shared a major frustration with me - the fact that people confuse management and leadership.

I've talked to Warren (Bennis) about why that is, this is really not that complicated an idea, and I've never heard anyone who disagrees with it. Yet people continue to make that mistake, and I'm completely perplexed by that.

Through their tribal leadership work, Dave and his team have realised we've been training managers into competing for superiority over their tribes:

How we have trained managers, for as long as there have been managers, has been into Stage 3...and yet we wonder why work cultures are in such terrible state, around the world. Especially in large corporations. The state of everything from engagement to a state of vitality is arguably at a low point, so why is that? We know so much about management, we know so much about leadership, why are we having such a difficult time with this? 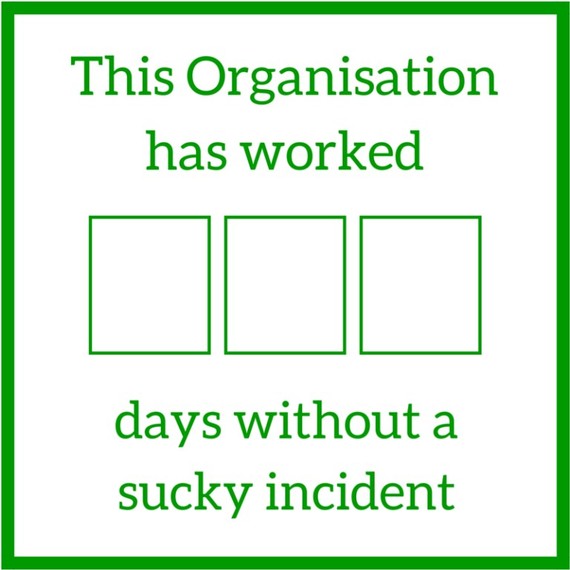 This stimulated another light bulb moment for me - well of course, when the people put in charge of organisations are managing, not leading; when management is designed to function in the competitive Stage 3 (or lower); how can organisational culture possibly thrive beyond I'm Great or, for some organisations, My Life Sucks.

Pulling the threads together
The last question I asked all of the TED speakers in these interviews, is whether they feel they're living their purpose. When I asked Dave this question, he raised an interesting point that allowed me to see the real problem he is trying to help organisations grapple with.

Forget continuous process improvement, let's just work on sucking less; that should be the goal... it seems like we're addicted to sucking, and that needs to stop.

To me that isn't just a value or an aspiration, it's something that cuts very deep within me. I'm writing a book now that's going to focus on, among other things, the idea of outrage as a motivator for great bursts of purposeful action - and I'm outraged by that.

The biggest problem with all of this - the insight from the tribal leadership work - is that we all have a Stage 3 voice in our heads, but most of us fail to acknowledge it.

It's incredibly powerful. It's not a bad thing, it's not malicious, it's just somewhat immature. I have that; so do you, and so does everyone else. That's what I hope we will eventually circle back to, because if people do a better job of self-regulating, we'd have a lot fewer problems in the world.

The first step is getting people to see that there's a problem and that they're part of it.

"Hi, I'm society and I have a problem."
So, our Stage 3 brains and management structures, seem to create a society that is addicted to sucky organisations. As with all addiction, the only way we will ever move forward is to acknowledge that we have a problem, and that we are all part of it.

When you think about the tribes in your organisations, do you think there are any above a Stage 3? Sure, you might have the odd small team who seem to work within the We're Great paradigm, but a whole tribe? In my general experience, from a wide variety of tribes and organisations, Stage 3 is the norm; as you regularly try to bring people back from Stage 2.

Dave's purpose struck a chord with me, and I love that he does it in language everyone can understand. We are a society filled with organisation's seeking excellence and quality - maybe they should just focus on sucking a little less than they currently do.

Maybe it's time that, as a society, we admit we don't know how to stop creating and sustaining sucky organisations. At least as individuals, we should admit that we get caught up with our Stage 3 voices, and that those mindsets are never going to move society forward.