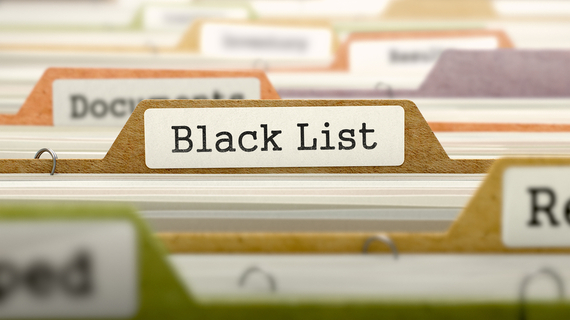 As a small business owner, you probably think of your newly-opened business as a snowflake: totally unique and worthy of special consideration.

But the fact of the matter is that, in the eyes of some business lenders, there are just certain industries they can't justify funding businesses in.

No matter how special your business might be, if it falls into one of these blacklisted industries, you'll have a tough time finding the business financing you need to grow.

Why does the blacklist exist?

The reasons for appearing on a lending blacklist are varied:

Some industries are considered simply too contentious to support. Others are based on speculation, so lenders think of them as too risky to bet on. Sometimes it's a "it's not you, it's me" situation--the lenders themselves can't access enough historical data to make an informed decision and decide to pass, or their algorithm takes into account factors you might never have expected to matter... But still doom you to rejection.

The irony? The businesses in blacklisted or restricted industries need loans for the same reasons their counterparts in greenlighted industries do, at roughly the same rates.

(Common reasons for applying for a loan include temporarily increasing inventory-purchasing capacity, a bridge loan or cash flow gap loan that can close the gap and pay bills while you wait for a traditional bank loan, an opportunity from suppliers for a discount on inventory that requires a large upfront purchase, and more.)

Here are the 4 main reasons why some lenders won't work with certain industries, as well as where you can go instead if you've been shut out.

"Lenders don't want to support industries that they feel are in nefarious markets," says Ryan Conti, the Customer Success Director at Fundera who manages the team advocating on behalf of small business owners who need funding. "Even though alternative lenders are more open to different businesses and models than banks are, there are certain industries that no one will touch."

These industries include adult entertainment and pornography, gambling and pawn shops, for obvious reasons--their reputations precede them. Conti says that "almost no one" will work with firearm dealers and businesses selling drug paraphernalia--even in states where cannabis is legal, due to the federal stance on marijuana.

Sometimes, it might not be that your industry operates in an area of moral ambiguity but financial ambiguity. That's the case with non-profits.

"We talk to many very profitable nonprofits, and good nonprofits can make a ton of money--but they're sort of few and far between," says Conti. "There's a much greater percentage of bad nonprofits that make almost no money and/or are solely propped up on donations. And donations are not a sustainable revenue source. So it's difficult for a lender to discern between the very good and very bad, and it's safer for them to just bar out the entire industry."

That sort of grouping together of businesses in an entire subclass is a common theme on the industry blacklist. "We just can't tell between a good and a bad business in the same industry sometimes," says Conti.

The next most common reason for being blacklisted is operating in some sort of speculative industry.

These are businesses that require a large upfront cost, with the expectation of an even higher payout. In other words, taking a big risk that isn't guaranteed to work out. Flipping houses--buying, remodeling, and reselling--is the most prominent example of this.

"Lenders don't want to fund risky businesses because they carry a high probability of default. With housing, if for some reason the housing industry takes a turn and you can't execute the remodel, that's a huge issue," says Conti.

Another example of a speculative industry is the recording industry. "The line, 'I heard this person and I know they're going to be great, so if I can get all this upfront cash, I can record them and make millions' is one we've heard before," says Conti.

The housing industry is subject to the sophisticated algorithms created by most lenders to make a decision on a loan request. These algorithms are based on thousands of selected factors, much of it historical data.

Since many lenders haven't been around for an especially long time, their data is often contained within the last 10 to 15 years--sometimes as few as 5 years--and the housing market is one of several that did exceptionally poorly during the recent economic downturn. The decisions created by these lenders' algorithms reflect that.

"It's not necessarily that housing is a bad industry and those in it are doomed for failure, but the algorithms won't favor industries that don't have good recent history," says Conti.

This same principle affects how often restaurants are able to get a loan. The restaurant industry in general is high-risk, and since so few make it past 2 years in business, to give a restaurant loan after just 6 months or a year is a bad decision on the lender's part.

This is where things get more nebulous. Those algorithms we mentioned are unique to each lender, so their decisions about whether to lend to your business can differ depending on which lender you go to. The same business might get different answers from different lenders because each one has their own preferences--influencing the industries and locations they finance, and the rates they give these businesses.

"This gets nuanced quickly," admits Conti. "Lenders take into account their historical analysis of your industry. But they also consider your industry relative to your geographic location--for example, restaurants in the Midwest are more successful than those on the coasts in major cities. They can even consider Yelp reviews. This is all in conjunction with reviews of balance sheets, tax returns, and cash flow analysis."

There isn't much gray area for businesses once their information is entered into these algorithms--and once the decision is spit it out, that's the decision. Sometimes there seems to be little rhyme or reason to that decision, but once you get into those more niche business lenders, they'll make decisions based on their preferences... And that's it.

"Some lenders love dentists. Some lenders love child day care businesses--and others won't lend to them at all," says Conti. "I've come across ones that are as random as knitting and textiles--screenprinting is one I know some lenders won't touch."

One preference for many lenders that often doesn't require their algorithm: any sort of other lending service, like check cashing or bail bonds. If you do lending, lenders would rather lend directly to your customers instead of starting a chain with you as a middle link.

You're on the blacklist... What can you do?
Some companies know that their industry is not favored or even touchable, and approach lenders with that knowledge upfront.

"'This is what I do. Are you able to help me?' If they're looking, they've had this conversation with a number of people who have already told them no," says Conti.

"But those restaurants or businesses will end up going to a short-term lender, which can give you a six-month loan--so there's a higher probability of them getting paid back in that time," Conti explains. "Or they'll do something like a merchant cash advance, where the lender will loan the business the money and then they'll take a portion of credit card sales, which mitigates the risk because there's some cash control."

This is why many enter the alternative lending space, where thousands of non-bank lenders--like peer-to-peer lending sites or companies that have secured their capital through wealthy individuals--can provide a lifeline.

"They think about things the same way, but they don't really dig into businesses the same way a bank would," says Conti. "So when they run their algorithm, they sort of have to make some assumptions. So they group, general contractors, for example all in the same bucket. They don't have the technology to discern, so they don't." This can cut both ways in terms of how likely it is that your business will be approved.

If you're set on a more traditional loan, your path is simple, if unguaranteed:

Find out why your business loan application was denied, fix the issues that you can, then apply again or look for another alternative lender who will consider your request. As mentioned above, sometimes it's just a matter of finding a lender whose algorithm trusts you as much as you trust yourself.

This article was originally published on the Fundera Ledger on November 29, 2016.