When twilight sets in, it may not be the dimming light that clues you in to the evening hour -- instead, it could be that blueish glow in the sky. According to a new study of mice, it's light color, rather than brightness, that may account for how a number of mammals biologically keep track of time.

The discovery could also have implications for human body clocks and sleep cycles, because human sleep is reliant on a 24-hour cycle of hormone release that is triggered by light.

In the study, published in the journal PLOS Biology, researchers from the University of Manchester were able to distinguish between the roles of light color and light intensity in the ability of mice to recognize the time of day. The study also revealed the prevailing strength with which the mice responded to color as opposed to radiance.

"This is the first time that we've been able to test the theory that color affects our body clock in any mammal," lead study author Dr. Timothy Brown said in a statement. "What's exciting about our research is that the same findings can be applied to humans. So, in theory, color could be used to manipulate our clock, which could be useful for shift workers or travelers wanting to minimize jet lag."

After analyzing the differences in light colors associated with sunrise and sunset, the researchers found that blue proved more dominant during twilight than any other time of day. They then measured the electrical activity associated with the rodents' body clocks during a visual stimulation experiment, and confirmed that the mice reacted the most dramatically to yellow and blue hues and to color more than light intensity.

Next, the researchers created an artificial sky and placed the mice beneath the simulation for several days, monitoring their body temperatures to account for the changes in their internal body clocks. Since mice are nocturnal, their temperatures spiked as expected as nighttime set in and the sky shifted into a darker blue tone.

However, when the researchers manually changed the artificial sky's brightness without adjusting the color of the backdrop, the mice proved more active before dusk, revealing that their body clocks were out of sync with the day-night cycle of their environment. While the increase in light should have made them more restful, the darker blue acted more dominantly in making them active.

While this groundbreaking study is the first of its kind, there is some previous research into light color affecting human sleep cycles. For example, we know blue light emissions can disturb sleep, and research has even found that selecting night lights that are reddish in color can help minimize additional sleep-cycle disruptions if a person has to get up in the middle of the night.

To help your body subscribe to its natural sleep cycle, check out this suggested schedule for winding down at night: 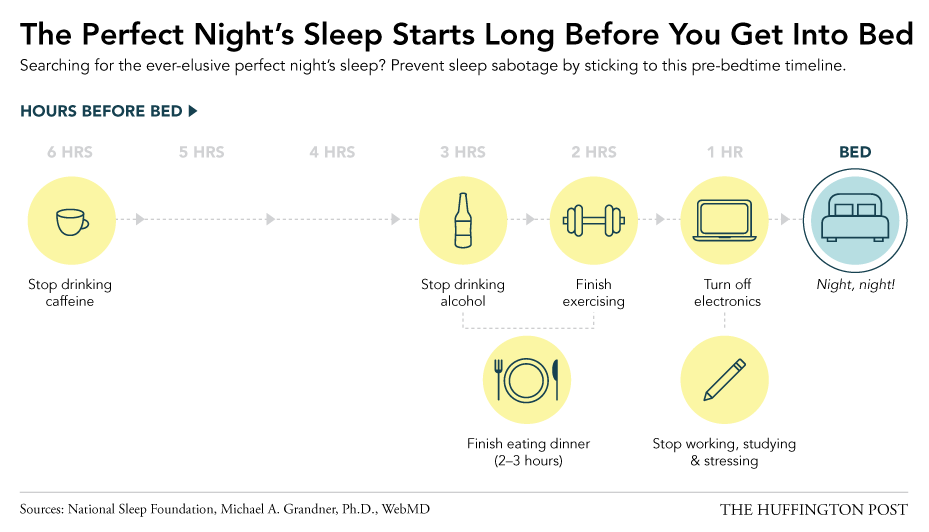 US Presidential Election 2020
Breaking news, analysis and the latest polls on the presidential race from HuffPost’s politics team
See More
1
E-readers
Monashee Frantz via Getty Images
As if there weren’t enough things keeping you tossing and turning each night, here’s a new one: Using short-wave, blue light-emitting e-readers, like the iPad, iPhone, Nook Color, Kindle and Kindle Fire, before bedtime can make it harder to fall asleep, according to a December 2014 study at Brigham and Women’s Hospital.

"When blue light hits the optic nerve, it tells the brain to stop producing melatonin," which is "the key that starts the engine for sleep," says Michael Breus, Ph.D., diplomate of the American Board of Sleep Medicine and fellow of the American Academy of Sleep Medicine. "This is especially problematic, since as you get older, the ability to produce melatonin becomes even more compromised."

Fixes: Open up a real book instead. (Remember those?) If giving up your e-reader is impossible, look for screens and glasses that can block the sleep-stealing blue light on websites like Lowbluelights.com.
2
Being overweight
Getty Images
Carry extra pounds, especially in the neck and trunk section, and it’s more likely you’ll suffer from sleep apnea, which causes your airway to become blocked or obstructed during sleep, robbing you of quality deep sleep. The condition affects 90 percent of obese men, though it's not purely a man's disease. The Cleveland Clinic reports that after menopause, it’s just as likely to affect women. Even more disturbing, it goes undiagnosed in as many as 80 percent of those who get a lousy night’s sleep.

"Sleep apnea can mask itself as fatigue, trouble with concentration, dry mouth or even depression," states Dr. Breus. Unfortunately, sleep apnea and obesity is a bit of a chicken-egg scenario. Do sufferers have problems because they’re obese, or is their obesity stoked by their compromised sleep? No one knows for sure, but what’s known is this: Poor sleep makes people less motivated to increase physical activity, which can lead to more weight gain. Additionally, reduced sleep is associated with elevated levels of the hormone leptin, which helps regulate appetite.

Fixes: Among the various treatments for sleep apnea is a continuous positive airway pressure (CPAP) machine, which delivers air pressure via a mask that sits over your nose or mouth while you sleep. Other treatment options include losing weight, oral appliances (that resemble mouthguards), and Inspire Upper Airway Stimulation (USA) therapy, a new FDA-approved implantable device.
3
Medications
JanMika via Getty Images
Many popular over-the-counter pain medications, like Excedrin and Bayer Back and Body, may contain caffeine, which helps the medication get absorbed more quickly, but can cut into your sleep, according to Dr. Breus (who suggests always checking the label first). If you’re feeling under the weather, beware of nasal decongestants and daytime cold or flu medicines, as well, which can contain pseudoephedrine; you’ll feel jittery instead of tired. Instead, The National Sleep Foundation suggests choosing a medication specifically for nighttime use, like Benadryl, NyQuil or Zyrtec, which usually contain antihistamines that promote drowsiness instead.

Diuretics, water pills for heart disease and high blood pressure, and ADD medications like Adderall and Ritalin can also disrupt sleep, says Hrayr Attarian, M.D., a neurologist at Northwestern Memorial Hospital in Chicago, Illinois. Other culprits include steroids and some medications for depression or asthma. "As with any new medication, always check with your doctor first," says Dr. Attarian.

Fixes: If your meds are causing sleep problems, "First, I’d suggest talking to your physician to see if your medication can be changed or the dose adjusted," says Dr. Attarian. "If that doesn’t work, you can go to a sleep clinic to discuss treatment options that may or may not include sleep aids. Taking a sleeping pill is not always the right thing right away especially if you are taking other medications to manage health conditions."
4
A warm bath
KatarzynaBialasiewicz via Getty Images
Body temperature naturally begins to drop before bedtime, preparing us for sleep. Although a warm bath can relax and calm you, taking one too close to bedtime will not give your body enough of a chance to cool sufficiently to bring on slumber.

Fixes: To reap the full benefits of your bath, the National Sleep Foundation recommends finishing up your soak at least an hour before climbing into bed. While you’re at it, keep your room cool. "We sleep better in cool rooms," says Patrick D. Lyden, M.D., chairman of the Department of Neurology at Cedars-Sinai Medical Center in Los Angeles, California.
5
Choosing the wrong foods
yalcinsonat1 via Getty Images
If you like to snack before bed, watch what you eat. Loading up on foods that contain excessive salt or fat can stimulate brain waves, bringing on nightmares instead of sweet dreams, says the National Sleep Foundation. Choose foods that contain tryptophan (an amino acid linked to sleep quality), whole-grain carbs (which help boost serotonin production) and certain minerals (like calcium and magnesium, which can have a calming effect). Examples include half a banana and a handful of almonds, whole-grain crackers and peanut butter, a mug of warm milk, or half a turkey sandwich on whole-wheat bread.

Fix: In general, stick to a routine of eating early in the evening and try to avoid sugar at night. "Late meals are more likely to make it harder to sleep; snacking in the middle of the night can worsen insomnia," says Andrew J. Westwood, M.D., a member of the American Academy of Neurology and American Academy of Sleep Medicine. Additionally, eating too much can make you feel physically uncomfortable when you lie down, and may cause heartburn, contributing to wakefulness.
6
Clutter
trgowanlock via Getty Images
The ideal bedroom should be simply furnished and decorated, so there’s not much to distract you from the primary reason you’re in there—to sleep. Excess clutter and mess can often cause anxiety, and remind you of all your unfinished business, making it harder to fall—and remain—asleep.
7
Exercise
svetikd via Getty Images
Sure, being physically active can make you tired, promote sleep, and improve the quality of your rest, but exercising vigorously too close to bedtime can rev you up instead. "Aerobic exercise can raise your core body temperature long after you’ve finished," says sleep specialist Rubin Naiman, Ph.D.

Fixes: Dr. Naiman suggests completing exercise at least three hours prior to bedtime. However, gentle exercise like yoga, he says, can be helpful to promote relaxation and sleepiness.
8
Stress
bevangoldswain via Getty Images
When you’re stressed, your body secretes cortisol, a hormone produced by the adrenal gland. This can disrupt the body’s natural rhythm, says Dr. Naiman. "Cortisol is naturally produced in the morning. It peaks at around 8am, when it can be helpful to naturally energize us,” he explains. "But at the wrong time—like nighttime—it can make us hyper-aroused and disrupt our sleep."

If meditation is not your thing, there’s always a good old-fashioned belly laugh; laughter actually induces physical changes in your body, says the Mayo Clinic. It cools your stress response and can increase positive thoughts, which, in turn, causes your body to release neuropeptides to help fight stress.
Voting Made Easy
Register to vote and apply for an absentee ballot today
Register now
More:
healthy livinglightbody clockcircadian rhythmSleep