Ashura, an optional fast day for Muslims that commemorates different things for Sunnis and Shiites, /www.when-is.com/ashura-2014.asp"}}">falls on Oct. 11, 2016. The word itself, ashura, means 10, and the holiday is the 10th day of the Islamic month of /islamicinsights.com/religion/religion/muharram-to-do-list.html"}}">Muharram. The Islamic calendar is lunar, so the date of Ashura can vary depending on sighting of the moon.

/www.patheos.com/blogs/muslimahnextdoor/2011/12/ashura-an-important-day-for-all-muslims/"}}">Ashura marks many things: the creation of the world, Noah’s departure from the ark, Moses’ flight from Egypt and the martyrdom of the Prophet Muhammad’s grandson, Hussein ibn Ali, in 680 A.D.

Sunni Muslims consider Ashura a fast day for two reasons: Muhammad fasted then and Moses fasted in appreciation of the successful Exodus for Egypt. Shiite Muslims mark Ashura as a day of mourning for the Prophet Muhammad’s grandson. In fact, some consider Hussein’s martyrdom to be of two major events that led to /www.npr.org/templates/story/story.php?storyId=7332087"}}">the Sunni-Shiite split in Islam. Shiites, who constitute Islam’s second-largest denomination (about 10-15 percent of the world Muslim population), consider Hussein to be the one true heir of Muhammad’s legacy.

Shiite Muslims observe Ashura through mourning rituals such as self-flagellation and reenactments of the martyrdom, though not all groups condone the bloodletting ritual. Many travel to Karbala in Iraq, where Hussein was killed, as a pilgrimage on Ashura. Most observers wear black and march through the streets chanting and hitting themselves in the chest. Some use whips and chains — or cut themselves on the forehead — to ritually punish their bodies. This practice has been condemned by some Shiite leaders, so Ashura blood drives are often organized as a substitute. 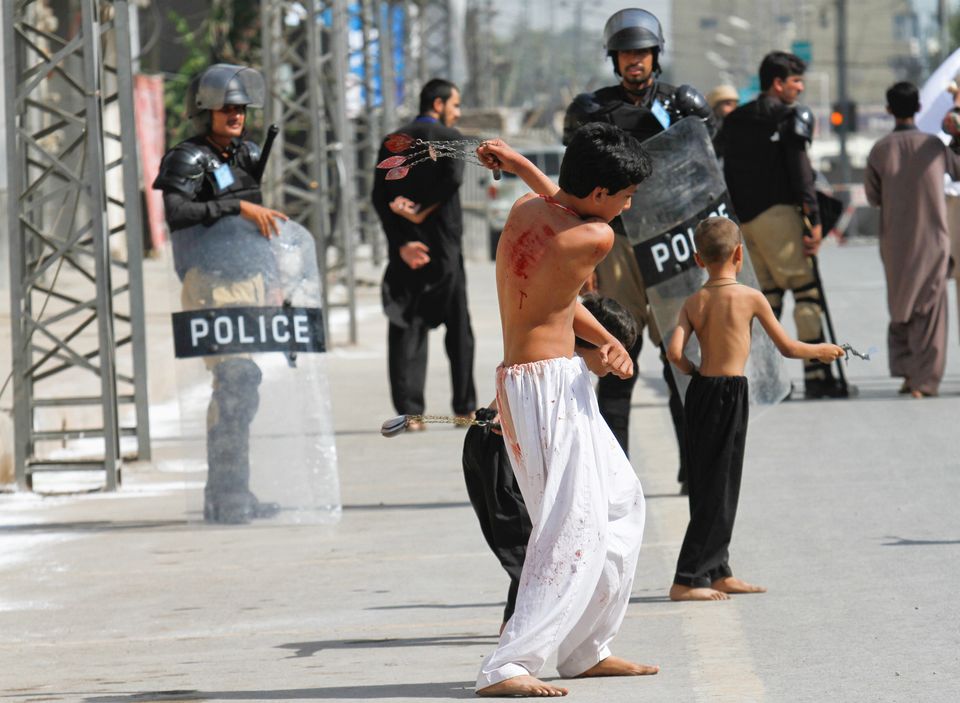 1 / 7
Police officers watch as boys participate in self flagellation during the Shi'ite Muharram procession in Peshawar, Pakistan on Oct. 11.
Fayaz Aziz / Reuters