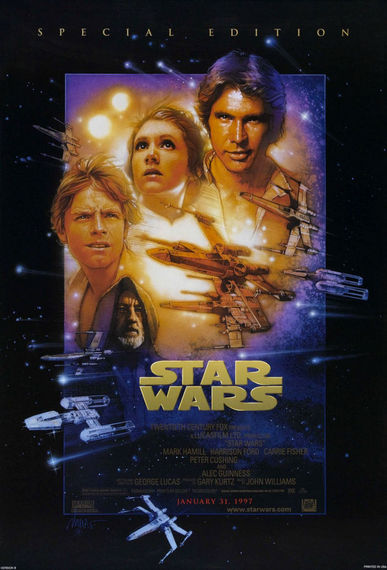 George Lucas did an amazing thing in 1977--he released a film that brought his incredible vision to the big screen. I'm talking, of course, about the original Star Wars film. It was not only the achievement of the size and scope of the film that wowed people, but it was the spectacular images, the movie poster art, done by some of the greatest illustrators of the era that got people excited. Illustrators like Drew Struzan, Greg and Tim Hildebrandt and Roger Kastel brought great poster art to life by hand with nothing more than pencils and paint. Before most people even saw the original Star Wars films, their imaginations were set soaring by the beauty and power of these single one-sheet posters that built excitement for the spectacle they were going to soon see on the big screen. These posters were more than film advertising; they were true works of art that were not only a part of the movie-going experience, but they were an amazing visual experience all on their own. Way before it was hip to be a geek, people had Star Wars posters by artists like Drew Struzan hanging on their bedroom walls as a way to not only remember the film itself, but to get lost in the artist's use of paint and composition to tell the work of art's own story.

Movie posters used to be a much bigger part of the movie-going experience. Back in the day, master artists were trusted to bring the film to life through their artwork. There were no digital short cuts, so only the best artists were hired. A one-sheet hanging in a movie theater or a full-page ad of the poster for a new Star Wars film in the newspaper was a powerful way to entice people and build excitement. In those days, studios couldn't just release a new poster on the Internet or spread the word on Facebook or Twitter. I totally understand that times have changed, but Star Wars not only had the most amazing artists working on the films themselves, but also on the films' advertising. The posters were just as exceptional as the actual movies, and each one told a unique story. A poster for a Star Wars film was special because it held huge achievements in its own right. And just as the Star Wars movies were the biggest and best in pop culture entertainment, so too were the posters that promoted them. Unfortunately, in my humble opinion, the posters for the new Star Wars films are not special; they simply look like every other movie poster out there today--cold, cookie-cutter, digital photographs you would see for any other generic blockbuster. Sure, these images are acceptable, but Star Wars should have posters that are exceptional. George Lucas knew and understood the power of Illustration. That is why the posters for Lucasfilm movies in the past were always so beautiful: the iconic Hildebrant Brothers poster for the original Star Wars that featured Luke Skywalker prominently holding his light saber over his head with Princess Leia crouched beside him with a blaster; the "Gone with the Wind" style Empire Strikes Back poster by Roger Kastel highlighting Han Solo kissing Leia with the backdrop of the ice planet Hoth; the beautiful Return of the Jedi teaser poster by Drew Struzan that features a grand menacing portrait of Darth Vader with Luke's and Vader's iconic lightsaber duel underneath. 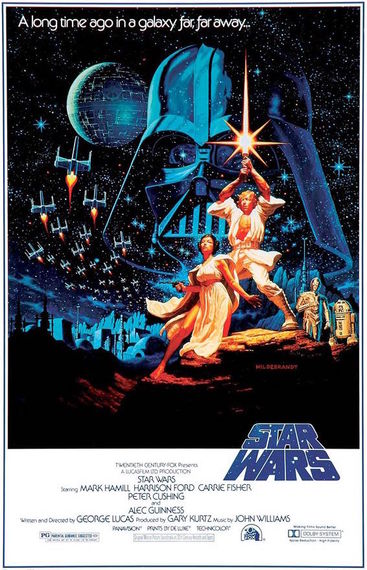 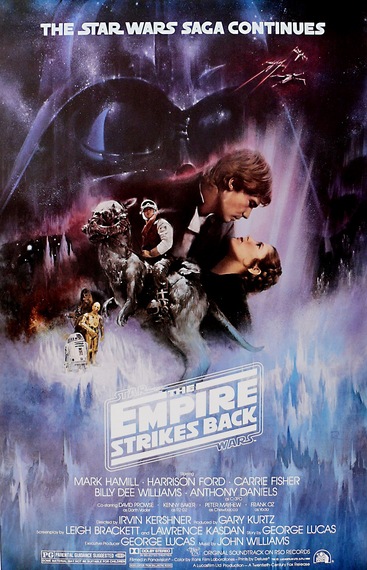 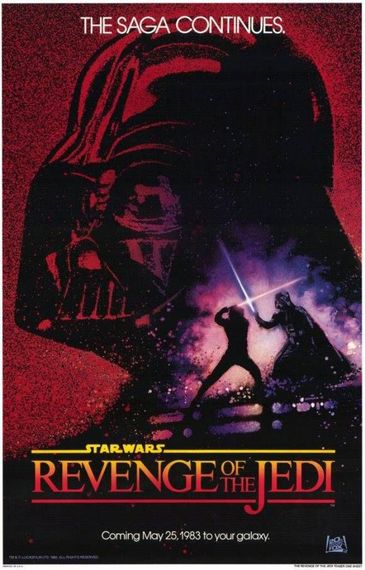 The artist that George Lucas hired the most was the iconic illustrator Drew Struzan, who not only did posters for the Star Wars and Indiana Jones films, but also for The Goonies, The Thing, Big Trouble in Little China, Harry Potter and the Sorcerer's Stone and the Back to the Future trilogy. I will admit that I've been a big fan of Struzan's work since my childhood. I was such a big fan, in fact, that I directed the documentary on him titled Drew: The Man behind the Poster (Kino Lorber Films). For that film I was lucky enough to interview Star Wars creator George Lucas, who explained why he loves to use illustrators like Drew for his posters. "I don't like photographs for movie posters. I prefer a painting; they have more quality," Lucas said. I couldn't agree more. Not only were these posters stand-alone works of art that the visionary filmmaker could appreciate, but George Lucas also used these amazing illustrators like Drew, Roger Kastel, The Hildebrandt Brothers and Richard Amsel to help promote his films. And like many pieces of art, the work continues to speak to this day. The original Star Wars and Indiana Jones posters have not only stood the test of time, but they continue to inspire a new generation of fans and illustrators. In fact, a new documentary about iconic Raiders of the Lost Ark poster artist Richard Amsel is currently being made by filmmaker Adam McDaniel. 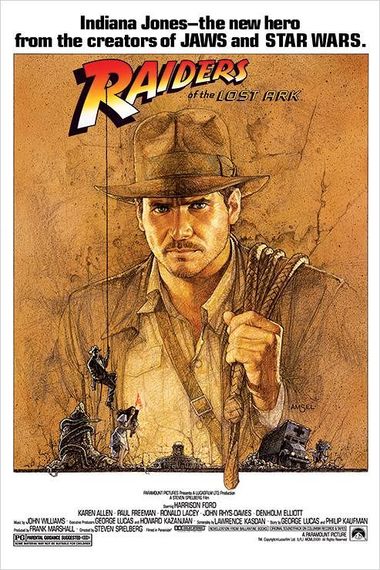 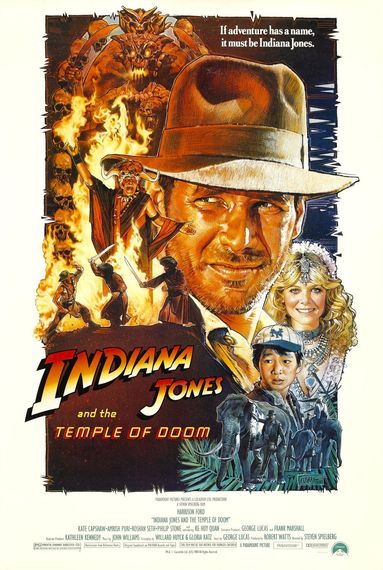 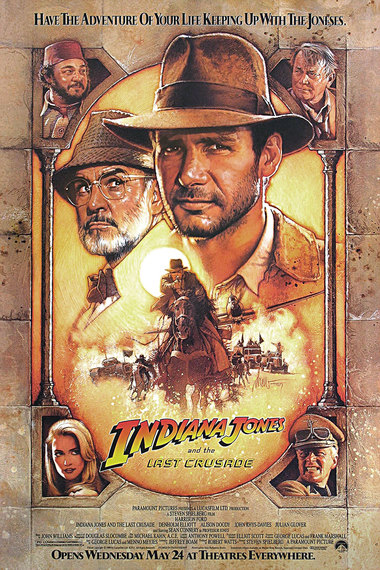 When George Lucas departed Lucasfilm after he sold the company to Disney, he handed the reigns over to famed producer Kathleen Kennedy, who has produced some of the biggest films in history, including E.T. and Jurassic Park. Given her years of experience with blockbuster films, she is the perfect person to run the company, and both Lucasfilm and Disney have done an amazing job bringing Star Wars to a new generation while also exciting the original fans. The way they have rolled out trailers for new releases has been masterful. They have also brought in amazing directors like JJ Abrams and Gareth Edwards to direct the new films and have great leading roles for actresses like, Daisy Ridley and Felicity Jones. I love everything they are doing, but the posters.... Why leave behind the Lucasfilm tradition of beautiful illustrated posters for the new films? Master artists like Drew Struzan, Greg Hildebrandt and Roger Kastel are still with us and have a lifetime of skill and experience that they continue to offer. Or they could always turn to another generation of talented illustrators that grew up inspired by great poster artists like Drew that include Mark Raats, Jason Palmer, Blake Armstrong and Paul Shipper. Star Wars has characters, lines, images and sounds even that continue to be passed down through the generations; why not keep the tradition of the poster art alive as well? The truth is, the Star Wars films will most likely continue to be huge hits regardless of how good the posters are, but I just don't think the new Star Wars posters will be remembered and loved for years to come in the same way the illustrated posters have been for decades. But don't just take my word for it. Below are examples of the classic illustrated Star Wars posters alongside the new digital posters; look and decide for yourself. And when you step into the theater to see the next Star Wars film, Rogue One perhaps, pay special attention to the poster that's promoting the film and see how it stirs you. I want to give a big thanks to fellow geek and writer Heather Leah Huddleston for helping me with this piece. I also want to say Rest In Peace to a truly amazing actress and writer, Carrie Fisher, who gave iconic performances as Princess Leia and is a shining light in the Star Wars films. The Force will be with her, always. 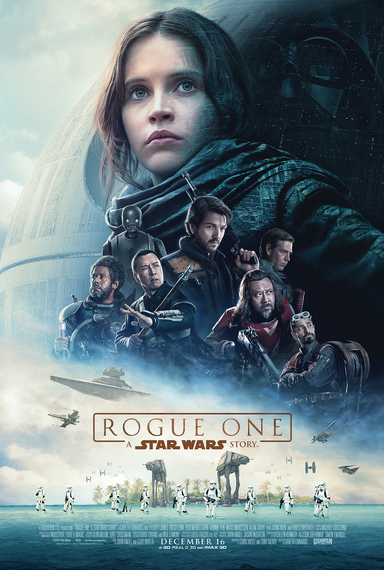 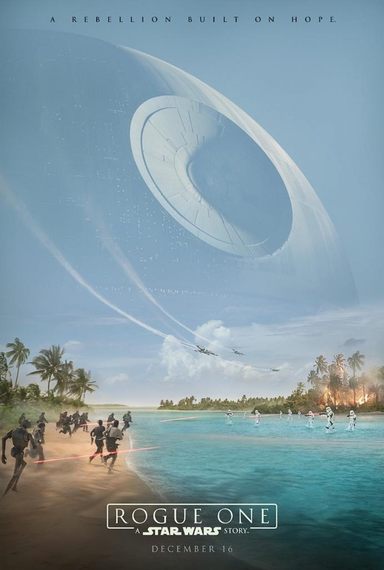 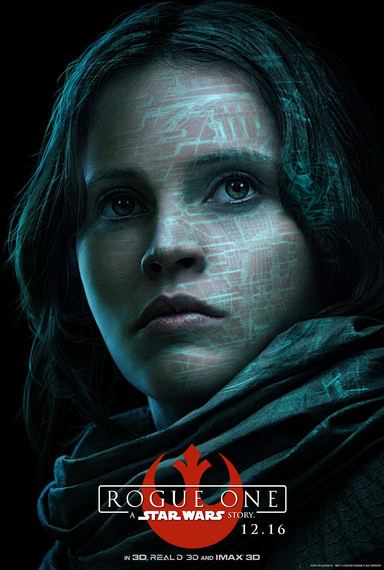 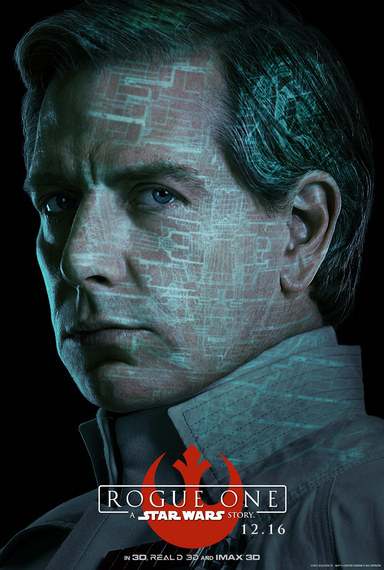 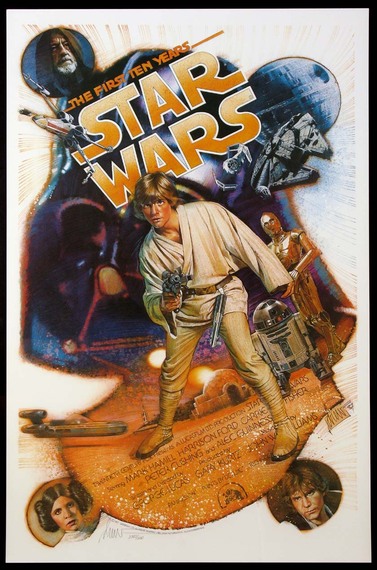 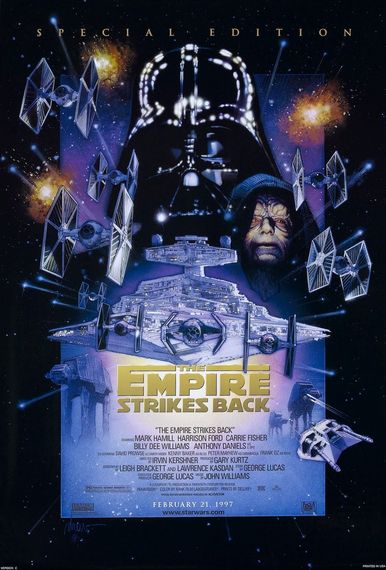 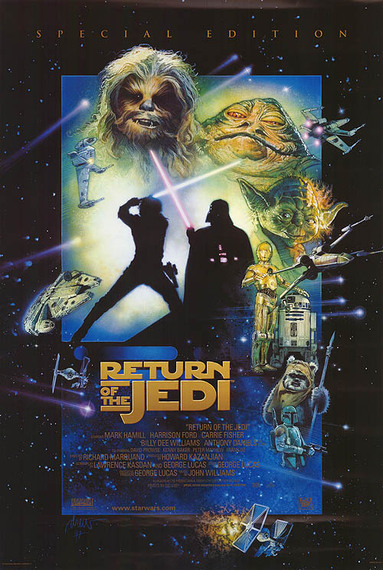 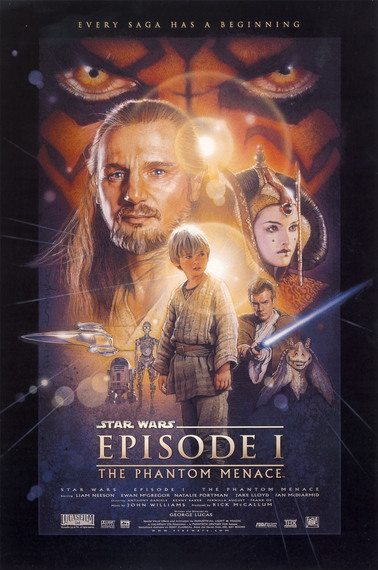 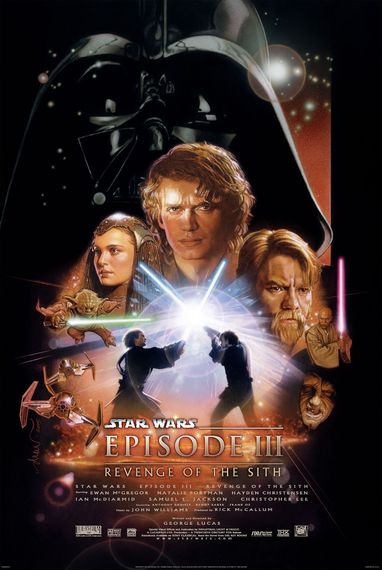 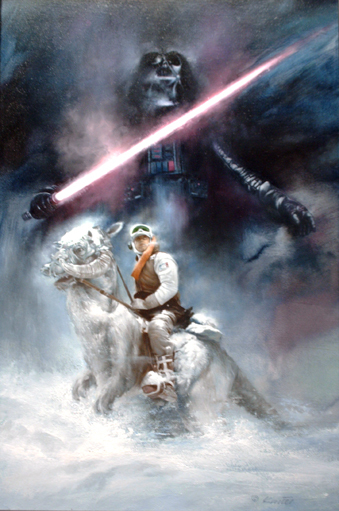 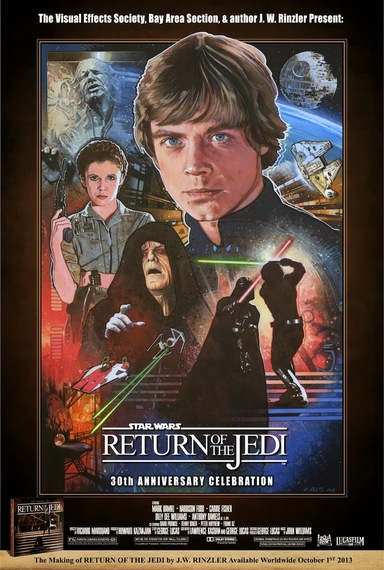 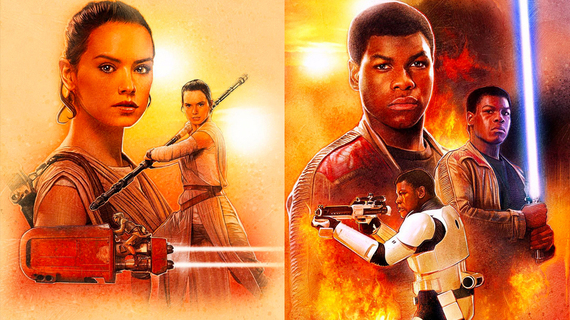 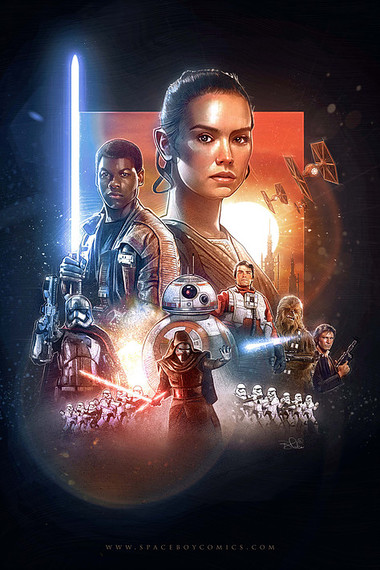 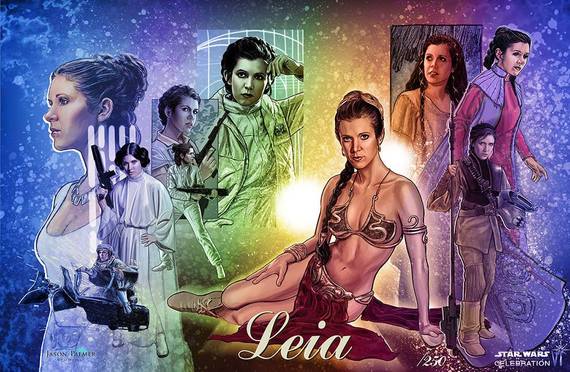 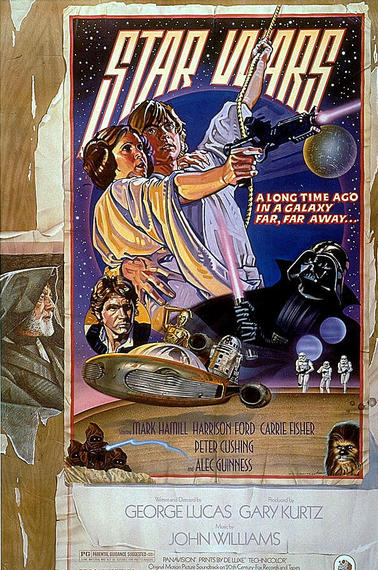