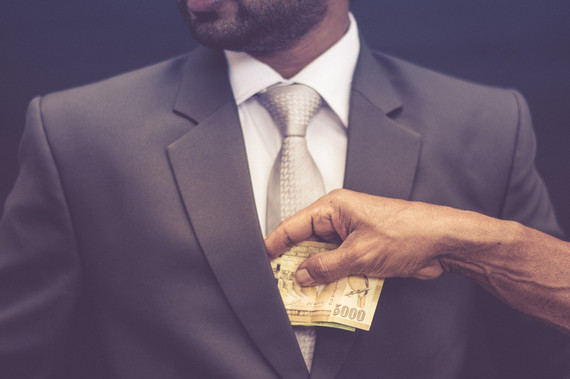 The state is a very important institution, determining "who gets what, when, and how", in Harold Lasswell's definition of politics. As such, various interests will always attempt to influence the state to achieve their desired outcomes.

Lobbying political actors to achieve certain socioeconomic outcomes is an acceptable practice in a democracy or any other form of government.

Lobbying falls within the scope of the so-called "stakeholder management functions" of for-profit and non-profit organisations. Even government departments and municipalities engage in lobbying, with party links and contacts playing a critical facilitation role.

But, as is the case with the alleged influence of the Gupta family in the running of South Africa, state capture differs from stakeholder management. The family denies the charge.

The onset of decay

Fukuyama describes the process of state development from kinship-based or band-level societies to tribal organisations and, ultimately, modern states. The distinguishing factor is that in band-level or tribal systems access to resources is determined by personal relationships with the ruler, while it should be impersonal in fully "developed" states. In other words merit, vis-à-vis the relationship with the ruler, determines distribution of resources when states have developed beyond tribal organisation.

Political decay sets in when developed and impersonal institutions degenerate into personal fiefdoms, with kinship and friendship being reintroduced as determinants of fortune within the polity. Fukuyama calls this repatrimonialisation. Generally it is referred to as neopatrimonialism.

This process, which at its extreme develops into state capture, is not unique to South Africa. Developing and developed countries have been subject to capture by interest groups. Fukuyama cites an example of how the US seems unable to have a robust regulatory framework for its banking sector because banks fund political parties.

The end result is seldom good.

the efforts of a small number of firms (or such groups as the military, ethnic groups and kleptocratic politicians) to shape the rules of the game to their advantage through illicit, nontransparent provision of private gains to public officials. Examples of such behaviour include the private purchase of legislative votes, executive decrees, court decisions and illicit political party funding.

In a nutshell, it denotes holding the state ransom to the private desires of a particular group or for their selfish gains. A level of aggression and foul play is implied.

One can categorise state capture in two forms.

First, there is what can be called systemic state capture. This refers to "institutions" that affect the internal and external sovereignty of the state and limit its policy options to those that favour powerful sectors, which stand to benefit.

A distinguishing feature of systemic capture is that it can be faceless. There may be particular families who are said to be chief architects or beneficiaries of institutions. But, they cannot be singled out as solely responsible for one decision or another.

Systemic capture is an example of what Marxist scholar Robert Cox refers to as "historic structures" in "Production, Power, and World Order" or what Daron Acemoglu and James Robinson refer to as "extractive institutions" that account for "Why Nations Fail". These systems can be toppled by revolutions, not necessarily targeting specific individuals but institutions.

Secondly, there is what one may call predatory capture - a system in which one or a few individuals hold specific political figures ransom and bully their way to individual gain. This type of capture is "crude", to borrow from Rok Ajulu's upcoming book on Kenya. It affects transactions, with specific individuals instructed to take certain decisions on specific procurement processes.

Predatory capture has potentially huge direct personal costs compared with its relatively impersonal systemic counterpart. A specific being, call him or her a predator, has the ability to call, follow up, threaten or even punish those who fail to comply.

The alleged interference by the Guptas in the affairs of government seemingly assumes this character. This is why it cannot be grouped together with the systemic influence of "white monopoly capital".

The input by some in South Africa fails to acknowledge this variation in the scope and impact of different forms of state capture.

There are those who believe there has been "systemic" capture of the state by neoliberal politics and market forces. Take the arguments advanced by former Economic Freedom Fighters parliamentarian Andile Mngxitama, for example. He implies that the Guptas should be let off the hook because they have limited power to influence choices made by the state. He also creates the impression that the Guptas are emerging businesspeople who are being victimised for attempting to enter industries dominated by "white monopoly capital".

Letting alleged perpetrators of state capture off the hook would be nothing short of absurd. Failure to tackle a bigger problem should not automatically translate into disregard of small manifestations of it.

The fact is, the South African government, through its President Jacob Zuma, is allegedly held hostage by a family, with specific people disclosing this publicly.

Examples of how the Gupta family has allegedly over-stepped the mark include:

1) Support for media interests owned by the Gupta family. The Guptas are alleged to have instructed a senior government official to support the daily newspaper, The New Age. The allegation has been denied. Both The New Age and TV broadcaster ANN7 have received significant government advertising spend.

2) The offer of ministerial jobs: Deputy Finance Minister Mcebisi Jonas and former parliamentarian Vytjie Mentor have alleged that the Guptas offered them jobs.

3) Influence in board appointments to state entities: questions have been asked about Mark Pamensky serving on the boards of national power utility Eskom and the Gupta-owned Oakbay Resources and Energy.

The governing ANC should do all in its power to address these allegations. It cannot be that democratic institutions are held hostage to the private accumulation interests of a few individuals.