Today marks 20 years since the United States ratified an international human rights treaty aimed at protecting people from racial discrimination (it's called the Convention on the Elimination of all forms of Racial Discrimination, or CERD).

The committee that monitors implementation of the treaty met in Geneva earlier this year, and it dedicates an entire section of its observations and recommendations to violence against women.

In acknowledging steps the United States has taken to reduce how often violence against women occurs, the committee said it "remains concerned at the disproportionate number of women from racial and ethnic minorities, particularly African-American women, immigrant women, and American Indian and Alaska Native women, who continue to be subjected to violence, including rape and sexual violence." That includes -- as advocates know all too well -- street harassment. 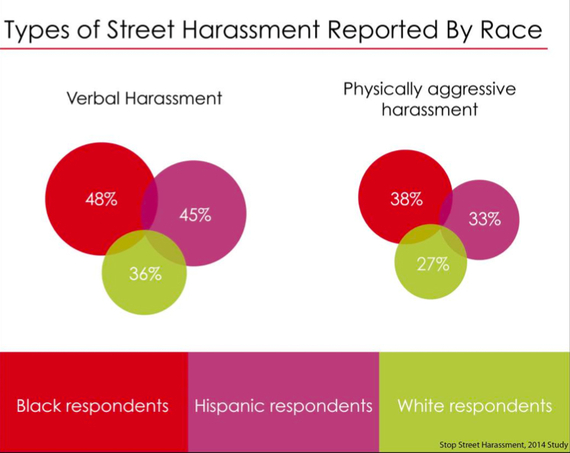 While the study's sample is limited, what it suggests is a story we see all too often: women of color in public spaces being harassed -- or worse.

Earlier this month, a woman named Mary Spears was killed in Detroit after saying no to a man's advances and refusing to give him her phone number, prompting Mychal Denzel Smith to ask -- who cries when black women die from street harassment?

"Mary Spears's right to move about freely in the world was denied to her, her life taken from her, and there are no marches," Smith said. "There are no widespread calls to protect the autonomy of black women and their bodies. The community leaders haven't deemed this unacceptable and a fate no one should ever face simply because they reject a man's advances."

Perhaps street harassment -- and these sometimes ugly, horrifying extensions of it -- isn't what the CERD committee had in mind when writing about the ongoing violence enacted toward women in the United States. But it certainly should be.

The committee also urged the United States to "undertake awareness raising campaigns on the mechanisms and procedures available to seek remedies for violence against women." Organizations like SSH, Hollaback and others are doing just that. Their efforts to teach men and boys not to harass -- we should all hope -- will lead, someday, to that permanent, systemic change we need to achieve safer public spaces for all.