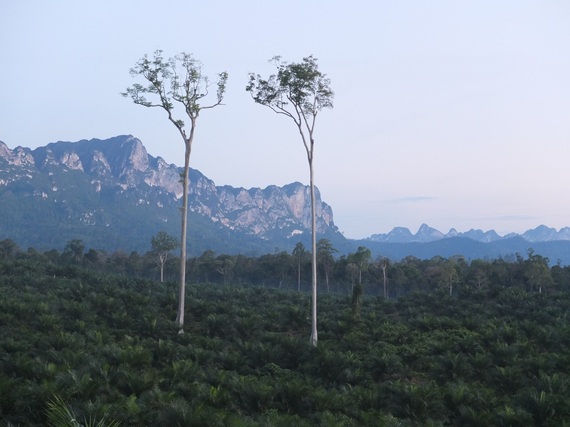 Palm oil is everywhere -- it's in our food, cosmetics and even our soaps and detergents.

But growing demand for this common ingredient is putting tropical rainforests -- and our global climate -- at risk. The expansion of oil palm plantations is the leading cause of deforestation in Indonesia and Malaysia. And palm oil development is now accelerating in West Africa and South America as well.

Stopping this threat is a tricky challenge. Palm oil is cheap to produce and a versatile ingredient used in many household products. As a result, it has become a large contributor to Indonesian and Malaysian economies. But cutting and burning those forests destroys habitat for wildlife like orangutans, affects the livelihoods and cultural identities of communities that have depended on the rainforest for centuries and increases air pollution -- including the heat-trapping carbon dioxide that contributes to climate change.

Solving this problem isn't going to be easy. But I'm beginning to feel optimistic. Here's why.

Palm oil has the potential to be a sustainable agricultural commodity. Oil palm plantations produce higher yields from less land and require fewer chemical inputs -- such as fertilizers and pesticides -- than other vegetable oil sources.

What's more, a host of actors are coming together in a promising collaboration to address palm oil-linked deforestation in a way that makes sense for everyone -- environmentalists, citizens, farmers, agribusinesses and wildlife.

Over the past few years, we've seen a chain reaction of positive developments in the private sector. Since 2013, companies representing around 60 percent of global palm oil production have pledged to eliminate palm oil-related deforestation from their supply chains. These companies range from consumer goods companies like Unilever and Coca-Cola to major suppliers like Cargill, Bunge and Wilmar.

And now in Indonesia, governments, businesses, communities and NGOs like the Nature Conservancy (TNC) are coming together to figure out how to make these commitments work on the ground with farmers.

Small farms manage the majority of land planted with oil palm -- an estimated 60 percent. Helping those farmers produce more palm oil on less land is a key piece of the puzzle in balancing Indonesia's economic growth with healthy forests and vibrant communities.

Together, we're developing and testing scientific tools, financial incentives and policy and regulatory measures to help shift palm oil production to already-degraded lands. We are improving the capacity of governments to prevent additional deforestation. We are helping companies compensate for forest lands they have damaged. And we are working with indigenous communities to help them obtain legal rights to sustainably manage their traditional lands.

The crucial next step is to integrate these solutions in a way that meets the needs of diverse stakeholders today and into the future.

Transforming an entire industry won't be easy -- it's extremely complex. But where there's a will, there's a way.

Take the Amazon rainforest, for example. At the height of the soy boom a decade ago, Greenpeace and McDonald's pressured Cargill to ensure its soy was sustainably produced.

The campaign worked. Cargill committed to stop buying soy from newly deforested land. The company pushed fellow soy traders to do the same, resulting in an unprecedented agreement that has brought deforestation in the Amazon due to soy expansion nearly to a halt.

To ensure the success of the agreement, Cargill teamed up with TNC and other organizations to develop monitoring systems and incentives for farmers who comply with Brazil's environmental regulations.

This encouraging example gives me hope for the future of Indonesia's forests. With smart collaboration, groups with different perspectives can find common ground and turn a rapidly growing industry into a successful model for sustainable development.