Forget what the fox says. Until recently, the bigger mystery was why the kettle whistles.

The high-pitched note emitted by hot kettles has puzzled scientists for more than a century, but thanks to two steamed-up researchers at Cambridge University, the exact physics of a whistling kettle have been worked out.

We've long known the basics, of course, that a whistle is caused by the vibrations of pent-up steam escaping a small opening, similar to a person whistling. In a paper published in The Physics Of Fluids this month, researchers Ross Henrywood and Dr. Anurag Agarwal delved deeper, examining how the two holes on a standard kettle whistle cap specifically interfere with the steam. 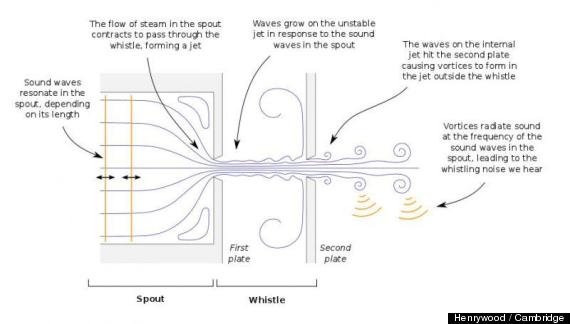 Steam produced by the kettle first meets a hole in the kettle's spout, which is significantly narrower than the spout itself. As steam is forced through the narrow opening, it creates a "naturally unstable" jet, according to a written statement released by the university, "like the jet of water from a garden hose that starts to break into droplets after it has travelled a certain distance."

When the now-imperfect jet of steam reaches the second opening, it "cannot escape perfectly ... and as [it hits] the second whistle wall, [it forms] a small pressure pulse. This pulse causes the steam to form vortices as it exits the whistle. These vortices produce sound waves, creating the comforting noise that heralds a forthcoming cup of tea."

Whistling kettles have been a puzzlement since at least the late 19th Century, when John William Strutt, Third Baron Rayleigh, published The Theory of Sound. Despite Strutt's theories about the kettle whistle, he concluded that "much remains obscure" about the sound.

The new findings have applications beyond tea kettles, as well. “Pipes inside a building are one classic example and similar effects are seen inside damaged vehicle exhaust systems," Henrywood said in a release. "Once we know where the whistle is coming from, and what’s making it happen, we can potentially get rid of it.”

Why Do Kettles Whistle? Science Has An Answer
Don't Try This At Home
1 / 5
Create plasma with a grape
DON'T TRY THIS AT HOME: A carefully cut grape in a microwave can create superheated gas if you set things up just right. It may look like a simple household experiment, but be prepared to destroy your microwave if you mess up! (Warning: some language in this video is inappropriate for children.)