In late April, its going down. That is, an eclectic mix of Jazz, Neo-Soul, jazzy Hip-Hop and Retro Funk for two days. Purely that. Straight, no chaser, as North Carolina's Theolonius Monk might say. Its not Pitchfork, Coachella, Bonnaroo, or The Roots Picnic. It's the Art of Cool Music Festival, in Durham, NC, the best-kept-secret, jewel box of a music festival happening this year I think.

How it came together will also inspire the least musically-inclined readers of Fast Company or Entrepreneur magazine. Its not everyday that 11 mostly young African-American professionals in a small southern town are about to mount one of the coolest music festivals in the country this year, but thats whats happening. In my "Part 2" about this festival, I'll dig into that business case study deeper. But right now, lets get back to the music and programming.

Start with the fact that this is a festival with James Brown's sax man and a violist known to put orchestral moves on legendary hip hop beats as the headliners, on the big marquee. I'm speaking of Maceo Parker and Miguel Atwood Ferguson respectively, both of whom I've seen live in the last year and can attest to their purely enjoyable showmanship.

With Maceo, its raw funk from those James Brown (and later Parliament Funkadelic) days tinged with the hard jazz that he honed on his first solo effort back in 1993. That got more gigs for this other hard working man in show business with the likes of Prince and hip hop artists De La Soul. Hailing originally from Kinston in eastern NC, he leads the pack of Tarheel artists that AOC has carefully intertwined into the two days. He's also known to have some guest vocalists here and there. 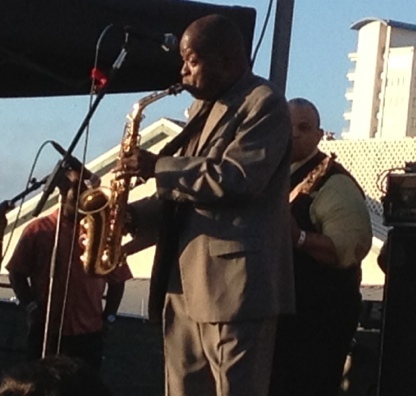 And while Los Angeles' Miguel Atwood Ferguson may not be a household name to many, this talented virtuoso of the new school is going to leave everyone in amazement with his ability to make strings sing as comfortably over hard-core beats or a gentle piano plunk. His face displays intensity and scholarship, as well as gratitude for your listening all at once. Peep this clip from his well-regarded "Suite for Ma Dukes" tribute to hip-hop producer J Dilla, after that legend passed away. To dive deeper, check out my blog about Miguel two years ago which can be found here.

Just because its designed to be, as its organizers describe "a festival is to present and promote jazz roots music specifically honoring the rich heritage of North Carolina's jazz/blues/soul music roots," doesn't mean it won't be without some durty grit and modern booms.

Digging deeper into this lineup and you'll see what I mean. The fusion of NC connections, forward-looking urban eclectic sensibilities with traditional southern soul is making for an interesting brew. Or more like some kind of digital molasses. I'm going to take a minute to speak on those I know about directly. That I've seen perform. Straight observations, up-close and in-person, no chaser.

Mark de Clive Lowe. Now also living in LA, via Cuba, London, Tokyo and New Zealand, this soulfully electronic producer is as well known in jazz circles as he is on sweaty house music dance floors. His "Church" series in select cities, takes people literally on that kind of journey. He and Atwood-Ferguson are known to collaborate, as evidenced in a photo captured at LA's Blue Whale not too long ago. They are psyched to go. "Yeah man, its gonna be a nice one. You can tell," said de Clive Lowe recently. 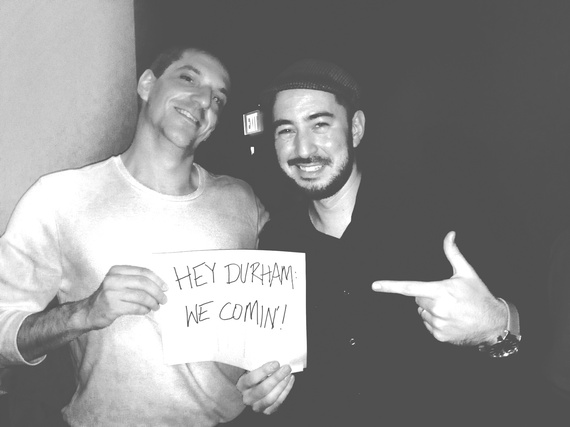 Cody Chestnutt.A soul man with an edge I'd say. You get the crooning and wails of a Marvin Gaye or Sam Cooke but sometimes with a jolt of ska or rock. But for me, I dig this video lullaby of a song he did about getting people to unplug from digital madness.

Amel Larrieux. Philadelphia songstress, prom date of Questlove, whose career started with the early electro-soul group Groove Theory and later the solo hit "Get Up," right in the middle of what was known as the Acid Jazz scene. Lately however, she has taken a decided straight jazz turn like this album - like her cover with jazz man Stanley Clarke of "Where Is the Love?" by Donny Hathaway and NC's Roberta Flack originally.

Foreign Exchange. While one-half of Foreign Exchange, Phonte Coleman, is a 'local', their sound transcends all borders in more ways than one. Their debut album was assembled largely via the Internet with Phonte's vocals and raps with partner Nicolay's electro-soul music beds laid down in The Netherlands. It is a beautiful, lush, play-it-all-at-once-and-head-nod piece of work. Definitely among the first 20 CDs (or music files I'd take with me in the event of a fire.

Bilal. If there's a leadership class of the neo-Soul sound, Bilal would have to be in the front row. Varying between acoustic guitar and hip-hop beats, his beckons the soul music of the past with a fresh, spare, not overwrought perspective. Even with nothing more than himself and the occasional stingy brim hat, he can get his croon on.

Thundercat. Arguably, there are a lot of soulfully eclectic 'brothers from another planet' on this bill, but I'll give top billing to Thundercat on that score. And I mean that in the best possible way. A bassist who has worked across all genres, his own signature is more of an 'astral soul funkonaut' vibe. A genuine trailblazer. Just saw dude in concert at a Red Bull Music Academy event and he ripped it. Peep his lovely but quirky music video below that showcases his musicality, eclecticism, and soulfulness all at once..

Nneena Frelon. As someone comfortable in serenading the festival stages of Monterey Jazz Festival or New Orleans Jazz Fest, Nneena will be especially at ease here because, as a Durham resident, she's literally just taking a ride down the highway. Jazz vocals is her game and she's got 5 Grammy nominations to prove it.

Kneebody. This frantic, largely instrumental jazz group out of Los Angeles, is a whirling dervish of sound, stretching one's mind to think about the possibilities of jazz that can inspire jack-knife body moves or at other times, a sort of contemplative warped record meditation.

All of this said about artists I've seen perform live, bodes great confidence in the rest of the line-up as well. Some I've heard about, like Shirlette and the Dynamite Brothers, Jocelyn Ellis and the legendary Clayton Brothers of course. But its clear, that careful attention has been made to selection and composition of both days' lineups by co-founders Cicely Mitchell and Al Strong with creative partner Cognito.

And then there's all of the other goody-good goodness like the Carolina Soul Tribute, Kidznotes Gala,The Jazz Loft Project photo exhibit, panel discussions, film and more. Quite a package.

I have to admit I dig this whole affair because I'm from North Carolina, with friends and family living in Durham. And while the "Bull City" has gotten its share of props lately as a great small city with urban flair, including write-ups in the New York Times and elsewhere as a destination, it hasn't been known for something like this event.

The new flood of amazing restaurants is great. And big events like Full Frame Film Festival and American Dance Festival or even the neighboring, Pitchfork-ish, Hopscotch Festival in Raleigh are always appointment travel for culture hounds, but this event does it in a way in which Durham's strong and proud African-American heritage is put right out there, front and center.

Which is one part of what is attracting people far and wide to visit. Ever-hustling Washington, DC native DJ Jahsonic is one of those taking time off from his own gigs to make the trek. When I asked him to capture why he was coming from such a distance, he wrote via email, "As an East Coast Native, it's wonderful to be able to attend a festival in my own backyard, so to speak. As a DJ and music curator, the line-up is absolutely relevant and essential. Festivals like this are how culture is not only preserved, but moved forward."

We all still got time to make that move. Stay cool.

The Art of Cool Music Festival is April 25-26, 2014 in the heart of Durham, NC. For ticket information and other program details, go to AOCfestival.org