One of my all-time favorite quotes comes from an unlikely source of entrepreneurial wisdom: Calvin Coolidge. That's right, the 30th president of the United States is a North Star of sorts for me when it comes to running a fast-growing company. While his tenure as our nation's chief executive may not be as memorable as some, one quote, one philosophy of his has stuck with me: 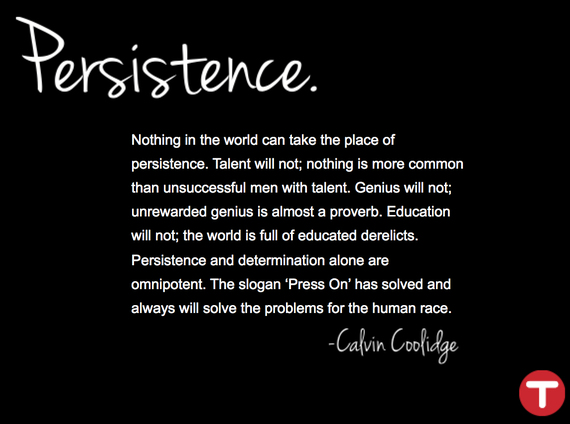 I love this quote because regardless of whether you are an athlete, a musician, a dancer or a business owner, there will always be someone out bigger/better/faster/stronger than you. There will always be someone with a better pedigree than yours. They may have gone to a more prestigious college, scored higher on an IQ test, or recruited a bigger name to sit on their advisory board. But it doesn't matter. If you want to excel at what you do, then you need to outwork everyone else to reach your goals. You need to be persistent and determined to succeed. And never give up.

I speak from experience. I grew up in small a town called Grand Junction, Colorado. Ol' Grandy -- a relatively small town situated halfway between the Green River and the Continental Divide. It's not a place most would consider a breeding ground for the nation's elite entrepreneurs. My mom was a grade-school teacher, and my father was a psychologist. My parents taught me character, but they admittedly didn't have a lot to teach me about building a business.

Which is why, for the decade of my life after college, I learned the value of persistence. With grit and determination, I've built six companies and sold four of them. One endeavor was a franchise of Cartridge World stores, where I systematically turned the accepted business model upside down. That process started with someone slamming his fist on the table telling me to accept status quo and others warning me that my plan would fail. It resulted in accumulating -- while staying true to my convictions -- the highest sales of any conglomerate of stores and becoming a speaker/coach to franchise owners across the nation.

I'm currently the co-founder of a fast-growing technology firm. And yet, unlike most of the CEOs based in Silicon Valley, I don't have an ivy league diploma framed in my office, and my background is in sales -- not engineering.

Perhaps the worst card stacked against me is where I decided to open my business in rural America: Boise, Idaho. Who builds a tech business there? I had someone tell me the other day that I'm the only tech CEO they know who drives a big diesel truck and hunts as an archer for big game on the weekends.

But those are the times that I've leaned on those inspirational words from "Silent Cal." Yes, I'm an outsider and an underdog. But giving up is not in my DNA or that of my company, TSheets. When we face challenges as a business, we don't look for the easy way out. Rather, we use our ingenuity, our character, our discipline, and our collective team intelligence to overcome those challenges.

This grit and determination came into play in the early days of TSheets when we saw the end of the runway -- a situation many entrepreneurs face every day. We were running out of money, which led to reducing our staff to bare bones and moving into a free space. The easy way out would have been to take Series A funding while we were still finding our feet, but it wasn't the right time. We were still learning who we were and what would make us into the successful company we are today. So instead, we bootstrapped and persevered while we worked to make TSheets what we believed it could be.

We've also used our underdog status to motivate us to outwork and outhustle our competition. During those early days, we received a small amount of publicity and were elated. But that elation quickly turned to dismay when it was met with massive criticism from the naysayers. However, instead of folding under the circumstances, we used those criticisms to evaluate who we were, right down to our core. It prompted a laborious process of growth and discovery, but we dug deep and created the TSheets core values that continue shape the way we operate and make business decisions to this day.

I think a lot of people can relate to these stories. Stories where the outcome would have been drastically different if it weren't for that key element of persistence. Most of us weren't born with genius-level IQs or millions of dollars in a trust fund. Rather, we've relied on our heart and grit to persevere and create the kinds of lives for ourselves that we've dreamed about.

So, no matter what kind of hand you've been dealt in life, don't use it as an excuse -- or worse, an attitude of entitlement about what life owes you. Remember President Coolidge's cautionary tale: There are plenty of people who were dealt all the aces and still failed.

Why? Because they missed the other ace up their sleeve: the desire to press on.