A father whose wife is expecting twins recently wrote a now-infamous post explaining why he felt "pissed" about it. As you might expect, the Internet pretty much hates this guy and I first reacted the same way: Anger, dismissiveness, disbelief, flaming bag of poop on his doorstep. As the father of twins, however, I felt it my duty to calm down and gently explain to him exactly how he's got this twin thing so very wrong.

You're scared. I get it. All parents are scared in one way or another pretty much all the time. And your first baby had colic, so you're understandably gun-shy. According to the Mayo Clinic, whether a baby has colic or is simply cranky has to do with duration and frequency of the crying jags. But, as I'm sure any parent will tell you, dealing with a baby that cries for two hours a day is just as stressful as a baby that cries for three. So, y'know, welcome to parenting!

Despite this, you and your spouse chose to have another child and used In vitro fertilization (IVF) to achieve this goal, knowing it increases the chance of multiples. You didn't want two because it would make life in your one-bedroom apartment difficult... Wait. You live in a one-bedroom apartment? And you wanted another kid in that apartment? Man, you're making it hard to be sympathetic here.

Move. Get a bigger place. I don't know your financial situation (though I know how much IVF costs -- we struggled with infertility issues for nearly a decade), but your apartment would've seemed just as claustrophobic with four people as it will with five. Good Lord, I hope you don't have a dog.

I'm just going to cut to the chase. Having twins rocks. Sure, you've got anecdotal evidence to support how much it sucks -- you asked people to describe the first few months of caring for two newborns. Of course they're going to tell you what hell it was. Talk to a soldier in battle and they'll express every fear, every tragedy, every doubt. Talk to them a couple of years later and they talk in terms of honor, glory and pride. That'll be you.

Yes, the first year will be the hardest thing you'll do, but the payoff is immeasurable. For instance, all parents of twins give birth to their own playgroup. Those with singletons spend a large part of the day having to entertain his or her child. Our boys play with each other for hours. Hours.

And twins tend to hit developmental milestones faster than singletons. Our boys were speaking in full sentences way before most of their friends because they always had a person their own age to practice on. Now, at 4-and-a-half, our twins can hold fascinatingly complex conversations -- complete with appropriate hand gestures -- with kids and adults. It's like we have a pair of Christopher Hitchens. Our dinnertime conversations are amazing and I now have a new respect for the invisible dragons they tell me so much about. 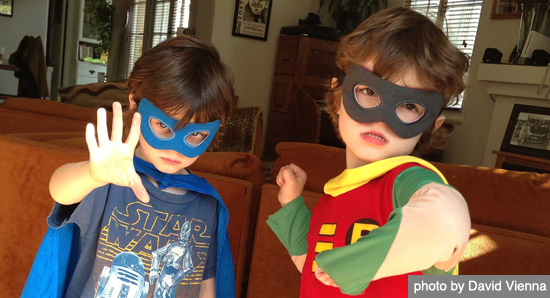 Most of all, however, having twins makes you a better man. (And after reading your post, that seems a pretty easy task.) The responsibilities required of you automatically reorder your priorities, streamlines things and helps you jettison baggage you never knew you had. I no longer care what my hair looks like. That saves me about an hour a day.

Right now, you're worried about you. It's not about you, it hasn't been since your first kid was born. So, stop thinking about how raising twins will suck and start thinking about which superhero you want to be when the three of you storm Lex Luthor's fortress in the backyard of your new place.

Seriously, man, get a new place.

David Vienna, father of Batman and Robin (who is also sometimes Iron Man)

Screenwriter, playwright and author of TheDaddyComplex.com and the bestselling book Calm The F*ck Down (2015)