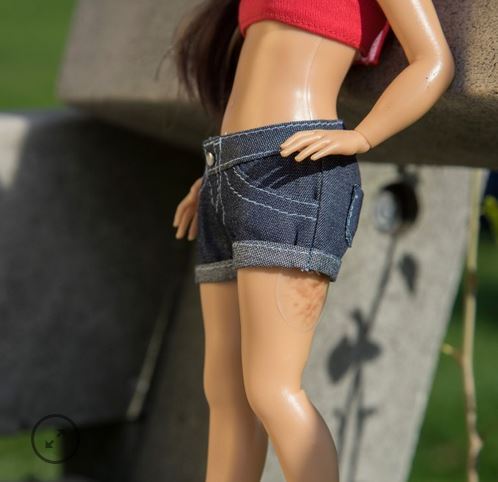 I hate to criticize Lammily -- the new "normal" looking doll for little girls -- as challenging the all-mighty Barbie and her size negative-four standards is a commendable act.

That said... I'm about to criticize Lammily.

The doll's much-heralded creator, Nickolay Lamm, has just unveiled "Lammily Marks," a collection of 38 reusable stickers that can be used to customize a more "regular"-looking doll; options include cellulite, stretch marks, freckles, acne, glasses, moles, a temporary tattoo, a cast and scars. The idea behind the sticker pack is simple, and easy to superficially appreciate: Women have flaws! Let's acknowledge them and help little girls find beauty in the imperfections!

But here's the rub: Packaging such features only works to enforce their status as imperfections... and controllable ones at that. Want to get rid of ugly cellulite? Peel it off! Don't want a doll with stretch marks? Don't stick them on in the first place! Little girls are already taught that they can and should manage how "perfect" their body is, and these stickers only work to enforce that dangerous and false message. If the intent was to show that average bodies have things like freckles and scars and stretch marks, why not build those features into the fundamental design of the dolls?

The bigger issue, though, is Lammily herself, a doll that -- despite being peddled as normalized and body-positive -- ultimately ascribes to a very narrow definition of beauty. Lamm claims he modeled his doll after the average proportions of a 19-year-old... yet those proportions appear to be suspiciously thin. 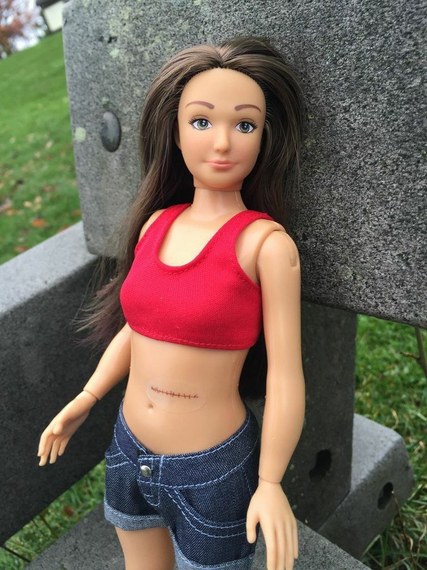 If this doll were real, she would fit right into the pages of Cosmo, or on a Fashion Week catwalk. This is not a "normal" doll; this is a skinny doll that's not quite as skinny as Barbie. Sticking a scar sticker on her sexy midriff as a way to make her seem even more "normal" is an offensive and insincere stab at body positivity that hasn't been earned.

In fact, it's Lammily's very mission to serve as a more realistic doll that is its greatest fault. At least with Barbie, there's a cultural understanding that she has an unrealistic body. By marketing Lammily as an "average" doll, it becomes all too easy for girls to assume they must really have a problem if they don't look like her.

And Lammily's fat-starved body assures that many girls will feel just that.

It's also worth noting, of course, that Lammily shares Barbie's lily whiteness. To be fair, there are plans in 2015 to introduce more diversity. But the fact remains that the company's flagship doll is a skinny white girl. This makes her, essentially, the exact same as Barbie -- and a few stickers can only go so far to obfuscate this truth.