By Megan Gustashaw for GQ. 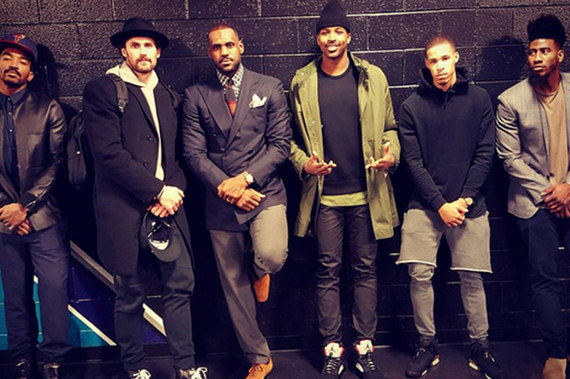 The Warriors may be undefeated, but no one messing with LeBron's squad in the game called style.

The world of NBA style can be a daunting place. Almost every player in the league not named Tim Duncan puts at least a little effort into their wardrobe these days, but apparently, no squad does it better than LeBron James and the Cleveland Cavaliers. A couple days ago, 'Bron Instgrammed a photo of himself and the squad, and each and every person in the photo is making some serious style swerves.

As is the case on the court, here LeBron is the clear leader of the pack, as it takes maturity and confidence to pull off a double-breasted jacket, let alone one that fits as well as his does. On the other end of the spectrum was Jared Cunningham, who sported a full athleisure look complete with running tights worn underneath his sweat shorts. (A look that's very John Elliott approved.) Everyone else, including Kevin Love, Tristan Thompson, Iman Shumpert, and J.R. Smith, struck a nice balance between dressed up and dressed down, with Iman opting for a T-shirt under his blazer, and Tristan perfectly acing the downtown NYC parka-and-Jordans look.

The point is, if the Cavs can get their collective skills on the court as high they are style-wise in this photo, then Steph Curry is really going to have something to worry about come next year's Finals.

The 6 Best Hairstyling Products for Men

The Sexiest Sports Bodies of All Time