CHAPEL HILL, N.C. -- When word of the execution-style killings of three Muslim students here leaked onto social media on the evening of Feb. 10, the internet exploded with outrage. Frustration with the lack of any major media coverage gave birth to the hashtag #MuslimLivesMatter, and within hours, #ChapelHillShooting became the top worldwide trending subject on Twitter. 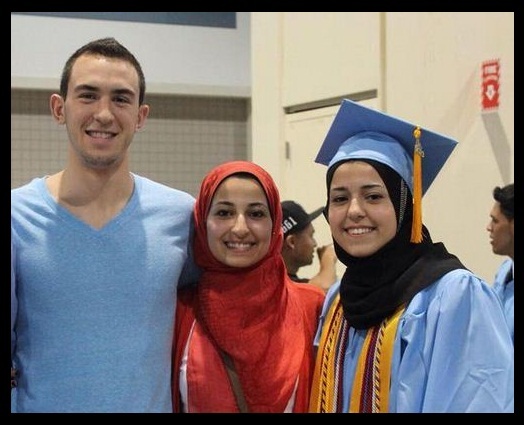 Overnight, the national and international press picked up the story. Pronounced dead at the scene were Deah Shaddy Barakat, 23, his wife Yusor Mohammad Abu-Salha, 21, and her sister, Razan Mohammad Abu-Salha, 19, three talented and promising young community members, killed in their own apartment in a quiet complex near the University of North Carolina's campus, all shot in the head. This grisly crime came at a time of rising anti-Muslim tensions in North Carolina and nationwide, on a day marked by a nonstop media drumbeat about the confirmed death of U.S. hostage Kayla Mueller, who was being held captive by ISIS militants. Many suspected the students' shooting was hate-related. 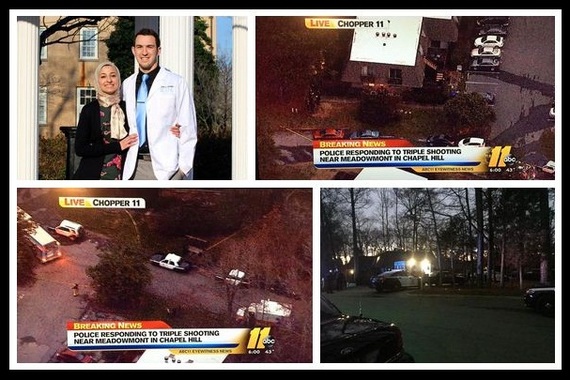 Yet early the next morning, Chapel Hill Police released a statement that said their "preliminary investigation indicates that the crime was motivated by an ongoing neighbor dispute over parking."

From that point on, corporate media outlets seemed content to follow Fox News' lead in whitewashing any suggestion that the killings were at least partially sparked by hate, trumpeting headlines like "Parking dispute, not bias, triggered triple murder, say NC police."

What is definitively known about the crime is that the suspect in the killings, Craig Stephen Hicks, 46, who turned himself over to police several hours after the shooting, was one of the victims' neighbors. Hicks moved to North Carolina from Illinois in 2004. According to the Los Angeles Times, "a Facebook profile that bore Craig Hicks' name and photo showed he appeared to be a militant atheist who shared anti-Muslim and anti-Christian posts and links." 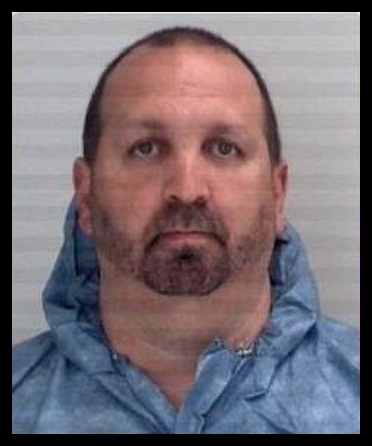 One of the last three posts Hicks made to this Facebook page, two days before the shooting, was an atheist-themed photo whose caption asked, "Why are radical Christians and radical Muslims so opposed to each others' influence when they agree about so many ideological issues?" Hicks expressed atheist beliefs in thousands of Facebook posts. 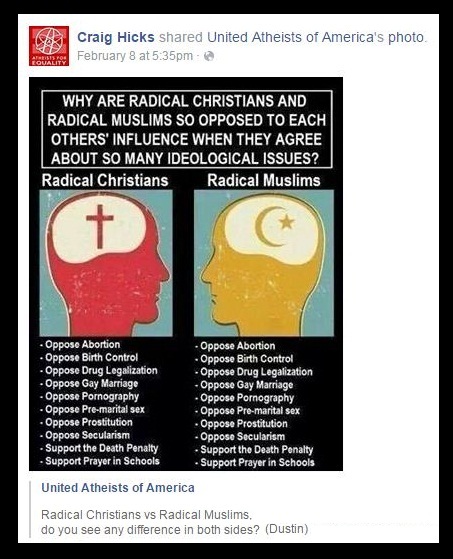 On Jan. 20, he posted a photo of what he said was "my loaded 38 revolver, its holster, and 5 extra rounds in a speedloader." In addition to the handgun Hicks was carrying when arrested, police recovered an arsenal of at least a dozen more firearms from his apartment, including "three handguns, along with several rifles and shotguns...(and) numerous loaded magazines and cases of ammunition." 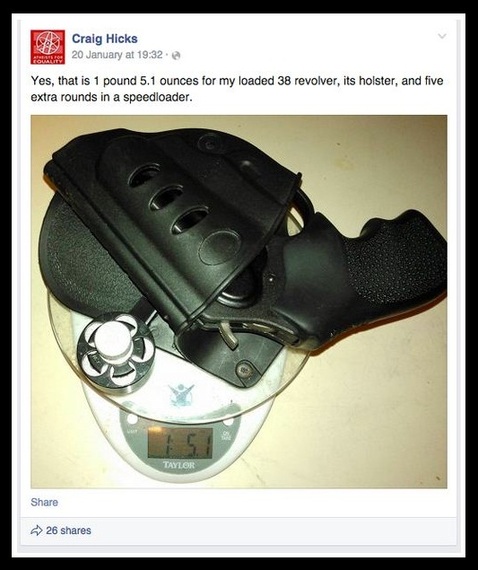 The slain women's father, Mohammed Abu-Salha, told WRAL-TV that the students were afraid of Hicks. "who had come more than once to their doorstep with a gun in his waistband."

"They felt he was hateful, and she used that word," Abu-Salha said. "She said, 'Daddy, we feel he hates us for who we are and how we look.' And our daughters dressed in the Muslim attire." 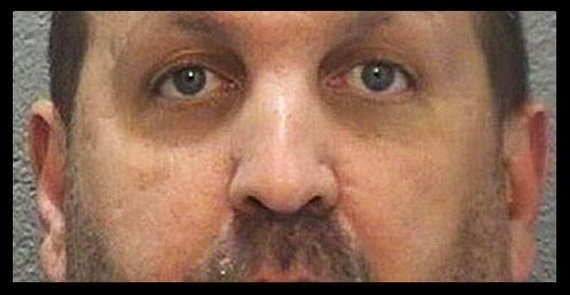 A close friend of the victims, Amira Ata, was interviewed by Dean Obeidallah for The Daily Beast, and explained why she thinks the shooting wasn't just triggered by anger over parking:

"Ata said she believes that Hicks killed them because they were the only Muslims in the apartment complex. 'They were targeted because they're different and this is a hate crime,' she stated emphatically. She also said that on the day of the murders, Deah had just returned by bus. The only one with a car was the younger sister Razan, who had already parked earlier in the day. The point being: There was no 'parking dispute' in close proximity to the actual murders."

It's undeniable that Hicks was a neighborhood bully known for hassling various other residents in the complex, especially when he felt they were parking in what he saw as "his" parking spaces. As Tara McKelvey reported from Chapel Hill for the BBC, "residents say Hicks had two parking spaces he focused on in front of his apartment."

Each apartment in the complex is assigned only one space, with all others reserved for visitor parking. By policing two spaces, Hicks was violating the complex's own parking rules. Deah Barakat's sister, Dr. Suzanne Barakat, confirmed to CNN that when Hicks returned home on the evening of Feb. 10, no cars belonging to any of the three victims were parked in the spaces he considered to be his: 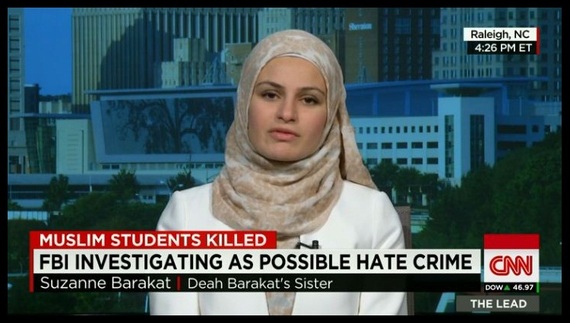 "On the day of the murders, the parking spot that was, quote/unquote, 'disputed' had no parking -- no car in it. I wondered maybe was it Razan who was visiting her sister to keep her company had maybe parked in that spot and that triggered it. No. They all knew not to park in this disputed visitors' parking spot. And by disputed, I mean the one that the neighbor claimed belonged to his wife and had been cleared by the apartment complex agency as open and free to all. And despite that, they did not use it. So, this was not a parking dispute."

Hicks' ex-wife Cynthia Hurley said his favorite movie was Falling Down, the 1993 film starring Michael Douglas as a laid-off defense industry worker who goes on a lengthy shooting spree. Hicks reportedly tangled with numerous residents over parking issues, but his own shooting rampage began and ended only with his Muslim neighbors. Why were they the only ones he singled out for repeated, gun-toting harassment? No other residents have come forward to say Hicks ever came to their doors carrying a gun.

This crime has struck a powerful chord in the hearts of Muslim-Americans, Muslims abroad, and everyone else who cares about Islamophobia. The corporate media's willingness to frame these killings as resulting from nothing more than a parking dispute reveals a double standard when it comes to reporting about Muslims as victims of violence.

Mohamad Elmasry, a communications professor at the University of North Alabama, noted:

As some have pointed out, if Craig Hicks had been an observant Muslim with a history of posting Facebook rants against secular humanists, and then shot three white college students execution-style in the head, no one would be talking about parking. He would have been labeled a domestic terrorist, and if he had tried surrendering to police after the fact, might have been shot on sight.

Fox's rush to spin these killings as anything but a hate crime was understandable, because to explore otherwise would mean raising questions about the network's role in shamelessly fanning the flames of Islamophobia.

But why did other corporate media go blindly along that path? And why did local police do the same? What kind of thorough investigation into this crime's motives led to such a quick pronouncement?

It didn't help that the department charged with investigating the killings is currently underfunded and short-staffed. Or that despite serving and protecting the most liberal community in North Carolina, Chapel Hill's police department has a history of insensitivity towards the town's minority citizens.

Former resident Cynthia Greenlee, now a doctoral candidate in history at Duke University, describes once driving with her boyfriend, a "tall, bearded black man with a naturally serious (read: threatening) demeanor," when they were pulled over by police:

"When a Chapel Hill police officer pulled a gun on us for a routine traffic stop, we didn't argue. He said we were speeding, but he was the quick one as he drew his weapon the moment he disembarked from his car. I was still wondering if we had a taillight out when he screamed for us to stay in the car and pointed his gun at us." 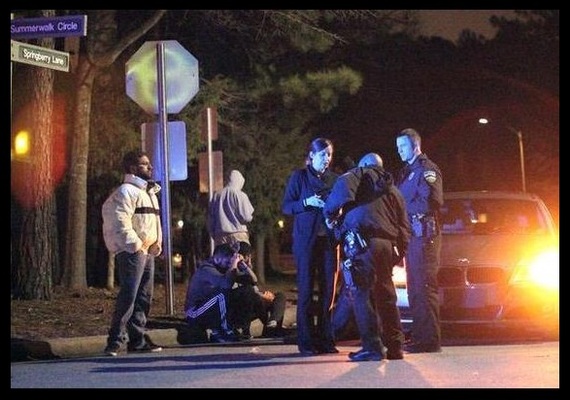 Victims' family and friends waited for answers in shooting's aftermath

Also troubling is that the killings happened within Durham County, N.C., where law enforcement officials are not known for spotless ethics or competence. Over the past decade, "several scandals have raised questions about the dispensation of justice in Durham County," as the Washington Post reported last year. Two Durham district attorneys have been removed from office for misconduct since 2007, one of them Mike Nifong, of Duke lacrosse case infamy. "Prosecutors are rarely ever removed from office for misconduct," said the Post. "For it to happen twice, in the same county, within five years is extraordinary."

Observers hold out hope that newly-elected D.A. Roger Echols, who one local attorney described as "careful and deliberate," will adhere to a higher standard of justice while prosecuting this case. A Durham grand jury indicted Hicks on Feb. 17 on three counts of murder.

The FBI describes a hate crime as any "traditional offense such as murder, arson or vandalism with an added element of bias." In order to gather statistics, Congress has defined hate crimes as "criminal offense(s) against a person or property motivated in whole or in part by an offender's bias against a race, religion, disability, ethnic origin or sexual orientation." On Feb. 12, the FBI announced it had "opened a parallel preliminary inquiry" into the students' deaths, "to determine whether or not any federal laws were violated related to the case."

The New York Times reported that "people who have talked with the victims' families say they have some doubts about the capacity of local authorities to handle the case." Linda Sansour, a spokeswoman for the victims' families, said that "as of (Feb. 12), the family hadn't even been approached by law enforcement. They were already feeling like there was something missing."

Has our country's seemingly endless War on Terror made anti-Muslim bigotry more socially acceptable, and in the process devalued Muslim lives here at home? There are now five times as many hate crimes committed annually against Muslims in the U.S. than there were before 9/11. At the students' memorial service, attended by an estimated 5,000 people, Azhar Azeez, President of the Islamic Society of North America, said, "We are concerned that the anti-Muslim rhetoric may have angered some to commit violence against American Muslims."

Cynthia Greenlee analyzed the reaction of far too many to the media coverage of this crime:

"The fact that many of my Facebook friends are now doing particularly vigorous mental gymnastics to deny that ethnicity, race or religious identity might have anything to do with this act of violence speaks loudly to the needs of a dominant culture to see itself as bearing no responsibility for hatred in its midst--even in a town where a black man simply driving down the street invites a potentially deadly encounter with the law."

We will never know exactly what was going through Craig Hicks' deranged mind at the time these brutal killings were committed. But we should all reflect on the words of Yusor and Razan Abu-Salha's father, Mohammad Abu-Salha, who is a psychiatrist. "The media here bombards the American citizen with Islamic, Islamic, Islamic terrorism and makes people here scared of us and hate us and want us out," said Abu-Salha. "So if somebody has any conflict with you, and they already hate you, you get a bullet in the head."

There is much to suggest these three students weren't killed solely over a parking space. This heinous act looks more like a hate crime.