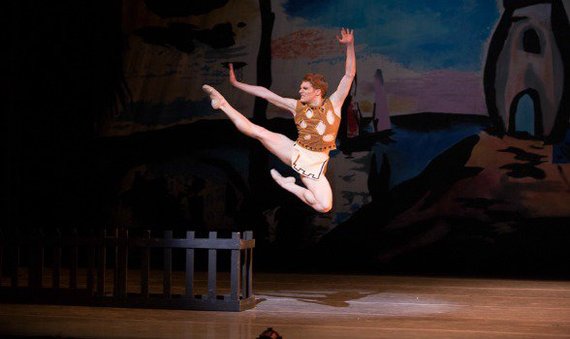 A candid interview with the artistic director of one of the premier U.S. ballet companies discussing boys, sports, bullying and the future of ballet.

Both of my daughters had ballet lessons for a year or two when they were younger. But as I think back about it, I never saw a young boy in any of the practices or recitals.

I never thought much about that until I wrote a couple of articles for The Good Men Project asserting that ballet is more of a sport than other activities such as bowling, billiards, darts, poker...etc.

Those articles got me thinking that within youth ballet, there seemed to be a stark lack of boys --the future of ballet requires boys now.

That observation was confirmed during a recent interview with Angel Corella, the artistic director for the Pennsylvania Ballet.

One of the things he shared with me is that ballet requires balance -- not just of each individual performer but gender balance because every ballet has specific choreographed roles and responsibilities for men and women.

However, the challenge facing ballet is breaking some of those gender stereotypes to help boys consider ballet to be as fun, exciting, rewarding, challenging and as athletic as more traditional pursuits such as baseball, soccer, football or basketball.

In the excerpted interview below, Corella shares his vision and that of the Pennsylvania Ballet, which has a ballet school for boys and girls that seeks to maintain that all important balance.

What led you into ballet?

The way I got into ballet is kind of strange because I came from a country [Spain] where men just didn't do that type of thing because of its machismo culture.

Regardless, I've been dancing since I was three years old. During that time in the late 1970s, the movie Saturday Night Fever was incredibly popular and I would mimic the dancing I saw of John Travolta's character every chance I could get.  It was a way for me to express my need to dance without formal training.

Then my sisters began going to ballet class and I would go with them because I was taking karate class nearby. But I would often watch their ballet lessons and really began to appreciate the beauty and athleticism of ballet. I continued to go to karate classes until a friend of mine suffered a broken bone -- so I stopped attending and sat in on my sisters' classes.

I did that for several days -- paying close attention -- while my mother would run errands, until I actually began to follow and mimic the movements, joining the class.

How was that for you as a boy in a very masculine culture of Spain?

I had some trouble. When the kids at school found out that I was taking ballet -- a few of them followed me home and bullied me saying I wore a tutu and wore tiaras. But I loved ballet so much and it came so naturally to me, I didn't even care about the ridicule.

Shortly thereafter I moved to a larger ballet school outside of Madrid, where I studied for several years before moving to the U.S. where I became a professional dancer.

Given your fondness for movies about dancing, what was your opinion of the movie Billy Elliot that came out in 2000? Seems like it was something you could relate to.

Yes, I could relate -- in fact there were eerie similarities. Like in the movie, my father was also a boxer and there was a great deal of tension and difficulty when I told him I wanted to be a dancer. But when you love something so much -- you're willing to fight for it. I was willing to fight for my love of dancing and that was something my father came to understand.

Can you describe the support network you had that kept you going?

It was my family -- especially my three sisters. One of my sisters was a dancer with me and she was right beside me to face every challenge together. But I have to say the opposition and bullying made me really strong as a person. I had to grow up quickly. So much so that I began dancing professionally at age 15 -- but the ballet provided me a discipline and a great outlet to stay out of trouble. Again, my family has played a critical role and we're still very close.

I can imagine family support was important because ballet lessons are not cheap, correct?

Correct, they can be a lot of money and they were for my family. My father worked two jobs to support our family and our passion for ballet and my mother was a school teacher. It was incredibly hard, but I'm very appreciative of that. I can tell you that both my parents were incredibly proud and repeatedly told me so after the first time they saw me perform -- in fact my father cried the first time he saw me dance, so all that effort really paid off.

Can you talk about the athleticism that's required of ballet dancers?

Absolutely, it's one of the few professions that require complete engagement of every aspect of your being -- mentally, emotionally and physically. Ballet demands complete control of your body from your toenails to the top of your hair during a performance. It requires complete concentration to make sure you don't hurt yourself  or other performers.

Bottom line, you have to be an athlete -- you have to be athletic and extremely well trained. There are extremely high leaps. It's a physical challenge lifting female dancers above your head several times during a performance.

Such athletic actions require balance, strength and poise because the ultimate goal is to make it look effortless and graceful -- like it's nothing. You can't show with your face that it's really, really difficult to create every human emotion with your body.

Ballet has been rewarding for you, even as a young boy. How do you introduce ballet to the next generation of boys?

You first have to make it as easy as possible for them to experience it first, and then continue to make it easy and enjoyable for them to want to continue to do it every day thereafter.  It's critically important to create a very positive atmosphere, and to help families support a boy's passion for ballet -- if he has it.

Usually, when kids -- both boys and girls -- decide for themselves that they want to dance, there's no way to stop them. It's the role of ballet companies -- such as the Pennsylvania Ballet where I work as the artistic director --to create the vision and capture the dream for children of what's possible and what they can become. It's very exciting to be part of that.

Tell me about the ballet school for kids that's sponsored by the Pennsylvania Ballet?

A full school year runs for 35 weeks, starting in September and ending in June. There are seven levels of training in the student division in addition to pre-ballet classes we offer for students ages 5 to 7.  There is no audition requirement for pre-ballet but all new students between the ages of 8-to-19 do attend a placement class so artistic staff may determine the level of study appropriate for each child.

General auditions take place throughout the year, and each year about 100 students are selected exclusively from the school to appear with the Pennsylvania Ballet in its annual holiday production of George Balanchine's The Nutcracker -- it's really amazing for the students and their families to experience. The most important thing is to start them young -- the younger the better. Ballet won't hurt their developing bodies but will make them stronger, more graceful and flexible.

What makes our program unique, is that the boys train with the boys which helps normalize the experience and bonding. Growing up, I only danced with girls and would have benefited from having more peers who were male.

Can you tell me about the need for male dancers in ballet and the important role they play?

Every performance must have balance -- just as in life. And that's one of the reasons why the ballet needs male performers, to provide that balance. Ever since the beginning of balance centuries ago it has been about both male and female performers. Both are equally important for the future of this art form.

By Tor Constantino, Sports Editor at, The Good Men Project