Forget about whether the Constitution "requires" the Republican-controlled Senate to hold a timely hearing and vote on confirming President Obama's nominee, Merrick Garland, to the Supreme Court. Maybe it does; maybe it doesn't. For now, let's set aside the Constitution. We'll just assume the Republican senators can do whatever they want. (That's basically what they're assuming anyway.) The question is: What's their best move? What should they do, politically? If they're smart, I mean.

Consider the situation. We're eight months out from the election and Obama has nominated a moderate to take a seat on the Supreme Court. How "moderate" is Merrick Garland? He leans left on some issues, but he may be to the right of Justice Scalia on other issues. He's very likely to replace Justice Kennedy as the new swing justice at the Court's ideological center. In other words, Judge Garland's record demonstrates he isn't the liberal lion Republicans might fear. He's probably the best Supreme Court nominee the GOP could hope for, coming from a Democratic president. (The Republicans have essentially said this themselves.)

Meanwhile, Donald Trump is winning the race for the GOP's presidential nomination. And Trump is not likely to beat Hillary Clinton in November. Most GOP leaders recognize Trump isn't good for their party (or for the country), so there's talk of trying to take the nomination away from him and give it to someone else at the convention. But that seems hard. And it could get messy. (Trump's actually threatening riots.) Also, taking the nomination away from Trump sends a mixed message: on the one hand, the GOP wants to "let the voters decide" who should pick the next Supreme Court justice; but on the other hand, they don't want to let their own voters decide who should be the Party's presidential nominee. That's awkward.

The point is, the GOP has a few problems right now, and their prospects don't look so good for November. Trump won't win and a third-party challenge (from Trump or an anti-Trump candidate) would only guarantee Clinton's victory. In the midst of these problems, Republicans have three options for how to handle Obama's Supreme Court nominee.

Option One: they can maintain that Obama doesn't deserve to appoint the next justice, and hold the seat open until a new president replaces Obama in January.

Option Two: they can hold the seat open through the election, hoping for a November miracle, then consider confirming Garland when the miracle doesn't happen.

Option Three: they can go with Garland now, get the confirmation out of the way, and focus on figuring out how to put the pieces of their fractured party back together -- maybe even in time to mount a not-embarrassing challenge to Clinton in November.

Immediately after news broke of Justice Scalia's death, Republicans chose Option One. They proclaimed Obama was a "lame duck" and they insisted we should "let the voters decide" who should appoint Scalia's replacement. Ted Cruz was the first out of the gates, announcing Option One on Twitter before most of the nation even knew Scalia had died. 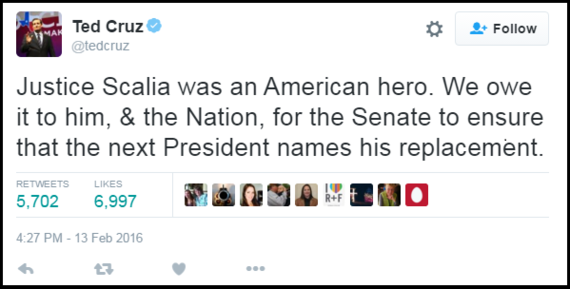 Logically speaking, the problems with Option One should be obvious. First, the voters already decided who should appoint Scalia's replacement when they elected Obama to a four-year term in 2012. And second, you can't call Obama a "lame duck" by any stretch of the imagination. That term describes the period between November and January -- after Obama's replacement has been chosen but before he has officially left office. It's simply absurd to claim a president is a "lame duck" for the entire fourth year of a four-year term.

Practically speaking, there's an even bigger problem with Option One, from the Republicans' perspective. Remember: the GOP faces an increasingly likely loss in November. Thus, choosing Option One means insisting Clinton should pick Scalia's replacement, instead of Obama. Does the GOP really think Clinton will nominate a moderate centrist to the Supreme Court -- right after she beats a fractured GOP that has either (a) split in two or (b) tried to rally behind a fascist? No, the GOP can't possibly think that Clinton's pick will be better for them than Garland. Clinton has already hinted that she would pick someone more progressive.

Which is why some Republicans are already moving toward Option Two. They'll "let the voters decide" in November -- then they'll consider confirming Garland after the election is over. Obviously, the intent of Option Two is to hope for a miracle in the presidential election, then to confirm Garland when the miracle doesn't happen. The superficial appeal of Option Two is that Republicans can have it both ways: they can deny Obama's pick if they win the election, while also denying Clinton's pick if they lose.

Put simply, Option Two is the hardest option for Republicans to defend because it shows just how unprincipled and politicized their obstruction is. Do Republicans really think they can defend this position for the next eight months, without it causing them even more political harm, heading into the election? No, they can't possibly believe this.

Which is why -- if they're smart -- Republicans will back away from Option One and Option Two and start moving toward Option Three. Just go with Garland. Obama has selected a highly respected, experienced centrist, who has already been praised by Republicans, and who believes in following the law. Republicans couldn't hope for anyone better from a Democratic president. And that's what we've got -- a Democratic president, duly elected by a strong majority of voters in 2012 and still serving the remainder of his term. Republicans should honor those voters, take the best they can get, and confirm Garland as the newest justice on the Supreme Court.

And they should do it quickly.

If a handful of Republicans go with Garland, quickly, the rest of the Party won't have to waste time defending their obstruction all summer long. And without this distraction, maybe they'll be able to figure out a solution to their Trump problem in time to mount a more-than-just-not-embarrassing challenge to Clinton in November.

And let's face it. If the Republicans really care about the Supreme Court, their first priority should be fixing their Trump problem and winning the presidential election. There could be as many as three or four more Supreme Court vacancies over the next eight years. Better to confirm a centrist now and focus on what needs to be done to win the White House, than to pick a fight over a centrist and risk doing even more harm to your chances of filling future vacancies.

So, take a deep breath and go with Garland. That's what the GOP should do right now. If they're smart, I mean. It's really the only good option they have.

If you agree, go tell your senators. You can email them. Or tweet at them. There are already a couple handy hashtags you can use: #FriendsOfMerrick and #GoWithGarland. And every Republican can find solace or inspiration in the words of President Reagan:

"The Federal judiciary is too important to be made a political football. I would hope, and the American people should expect...[that] the Senate should get to work and act." (President Reagan, encouraging the confirmation of Justice Kennedy in 1988.)