The battle between victims of the cholera epidemic in Haiti and the United Nations may resemble a classic David and Goliath story, except in this case Goliath hasn't even shown up to fight.

The reason is that the United Nations is granted "immunity from every form of legal process" -- even though public health experts believe UN peacekeeping troops are responsible for the cholera outbreak in Haiti, which has infected more than 750,000 people and killed more than 9,000 since October 2010. (Though a recent paper from Médecins Sans Frontières researchers suggests that there may be "a substantially higher cholera mortality rate than previously reported.")

Nevertheless, on Jan. 9, 2015, US District Court Judge J. Paul Oetken dismissed a class action lawsuit brought by the Institute for Justice and Democracy in Haiti. But in March the Second Circuit Court of Appeals agreed to review the District Court's ruling. The decision of the three judges is pending.

The United Nations should not be able to invoke immunity in order to foreclose on justice. The 1946 convention that granted them immunity also charged them with a responsibility. They aren't to be accountable to no one. Rather, according to the convention, the UN "shall make provisions for appropriate modes of settlement." But the UN has refused to do so in this case.

The United Nations should account for their role in one of the deadliest outbreaks of cholera in recent history. Some argue that time is better spent on halting the epidemic and not trying to point fingers at who started it. But while that trade may satisfy members of elite organizations, it is unlikely to satisfy people like Lisette Paul, one of the plaintiffs in the lawsuit. Her brother, Fritznel, became sick while working in the fields. He vomited and had diarrhea for seven days straight until he died. His medical and funeral expenses plunged his family into debt. Soon, they could no longer afford to send his daughter to school. The suffering of Fritznel, Lisette, and those like them shouldn't be pitted against the prevention of future pain. They should have a forum to air their claims and the UN should provide it.

No one doubts that the ongoing cholera epidemic in Haiti is a man-made disaster. The debate is who, or what, was responsible. Cholera is a bacterial infection that causes diarrhea and vomiting and, unstopped, eventually dehydration and sometimes death. People can catch it from contaminated water. But it hadn't been in Haiti for 100 years at least. So how did it wind up there in October 2010?

The short answer is human activity from South Asia. One team of public health experts matched the strain of cholera to a South Asian type. Another made a circumstantial case that the disease came from a camp of UN peacekeeping troops from Nepal. Before the troops were deployed to Haiti, there had been a cholera outbreak in Kathmandu, Nepal. Less than two weeks after the first cases, the Associated Press reported an overflowing septic tank, the "stench of excrement," and "a reeking black flow" from the camp's pipes to the Artibonite River, which 1.5 million Haitians use. 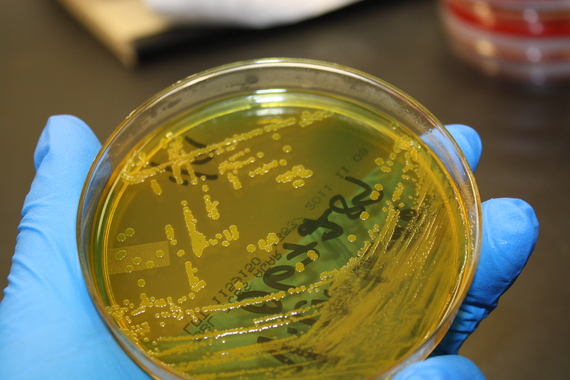 The UN doesn't deny all of these claims. In fact, they rounded up an independent panel that reached many of the same conclusions. They also found that the cholera strain matches the South Asian type and the outbreak happened "as a result of human activity."

But the UN panel report arrives at a different conclusion. Though they agree someone must have brought cholera to Haiti, they say no one should be blamed. This is because, they argue, there was a "confluence of circumstances." These circumstances include the environmental conditions, the role that Haitians played in spreading the disease, an especially deadly strain of cholera, and the country's poor sanitation and water conditions. Indeed, by the time the cholera outbreak hit, a mere 17% of Haitians had access to facilities that separate human waste from human contact.

The "confluence of factors" argument amounts to little more than victim blaming. If only Haiti had better water and sanitation, the argument goes, then cholera would not have spread.

But does that mean someone should be able to leak contaminated raw sewage with impunity? "From a legal perspective that stuff is all totally irrelevant," counters Brian Concannon, the executive director of the Institute for Justice and Democracy in Haiti. "If the UN negligently introduced this disease into an environment they knew was weak, then legally it's still responsible."

Still, this isn't an open-and-shut case. Daniele Lantagne and the rest of the UN panel give two reasons why not. First, there is no hard scientific link between the peacekeepers and the outbreak. Someone else from South Asia could have been in Haiti at the time and, however miniscule the possibility, they could have carried the strain. Second, the introduction of cholera undoubtedly was an accident and not a deliberate act.

But this only raises more questions that the UN should answer. No one argues that the peacekeepers contaminated the water supply on purpose. If they had the disease, they may have had no idea. In fact, it is possible to be totally asymptomatic. But this doesn't answer why they weren't screened for the disease. After all, a cholera outbreak was reported on September 23, 2010, in Kathmandu, which is where the peacekeepers trained for three months. They received a medical examination before traveling to Haiti. Why weren't they tested for cholera? A recent article in PLOS Medicine reports that the rapid diagnostic test only costs $2.54 per person and a single-dose prophylaxis on the higher end runs $1.32 per person.

Even if they were definitively singled out as the cause, it would be unfair to punish the peacekeepers. They weren't experts. Peacekeeping troops are hired out, largely from poor countries, to the UN for $1,028 per soldier per month of duty.

But that doesn't mean no one could have foreseen harm. Just two days after the January 2010 earthquake, the US National Center for Medical Intelligence wrote that it "expects damage to urban water and sewage infrastructure will increase rates of diarrheal disease, possibly to include cholera." Even if an accidental act and a confluence of factors spread cholera, the important ethical questions are when those factors were known, and by whom.

It isn't only outsiders like Brian Concannon and the IJDH who are calling on the UN to hear claims from the victims of cholera. In his first report as the UN's independent expert on the situation of human rights in Haiti, Gustavo Gallón called for a "reparation commission for cholera victims." Given that the UN proclaimed that victims of human rights violations must be able to seek remedies and reparations, Mr. Gallón reminds us, anything less would be hypocritical.

In October 2015, four UN Special Rapporteurs joined Gallón to argue that "the victims of cholera have access to a transparent, independent and impartial mechanism that can review their claims and decide on the merits of those claims in order to ensure adequate reparation, including restitution, compensation, satisfaction and guarantees of non-repetition."

More recently, Jan Eliasson, the Deputy Secretary General of the United Nations, wrote a letter that the "Secretary General and I are fully committed to ensuring that the Organization fulfills its human rights obligations." Yet the letter doesn't mention financial compensation nor does it mention any "transparent, independent and impartial mechanism" to review claims.

One out of every fourteen Haitians has been infected with cholera. They deserve an official forum to examine why this happened and who is responsible. People like Claudine, another client of IJDH, who spent her life savings to bury her father should be made financially whole. As of today, none of this will happen.