As the dust settles from the agonizing, six-week-long Indian electoral process, I am afforded the opportunity to share my thoughts on this remarkable outcome. In the lower house of Indian parliament (Loksabha), the Bharatiya Janata Party (BJP), led by its prime ministerial candidate Narendra Modi, has won a decisive majority on its own. The BJP and its allies comprising the National Democratic Alliance now form 62 percent of Parliament. On the other hand, the incumbent Indian National Congress (Congress for short) crashed from 206 to 44 seats. These figures, and the election itself -- the largest organized exercise in human history -- are truly historic. 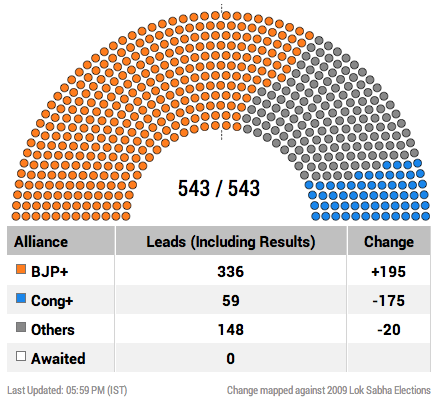 Still, many believe there is great cause to worry. These commentators label India's PM-designate Narendra Modi a controversial Hindu chauvinist and proto-Fascist. So, is the man leading the largest democracy in the world -- someone forbidden from visiting our own until last Friday -- a danger "to the very idea of India itself," as his opponents like to put it? The answer, in my view, is "No." And since I have already responded to this criticism as it relates to the past, I will focus here on giving an account limited to the present election and campaign. Earlier this year, I had the opportunity to listen to one of Modi's most vociferous and eloquent critics, Christophe Jaffrelot, at Princeton. One of the things he said to his audience then stands out now in the context of this week's verdict. If Modi came to power, he argued, it would mean that the Indian middle class had chosen to overlook his communalism because of large-scale Congress corruption. This "corruption versus communalism" paradigm is familiar, but so overly simplistic that it misses the point altogether.

To see that this is the case, one need look no further than the recent Bodo-Muslim violence in Kokrajhar, Assam, spanning July 2012 to the present. Leaders of the Congress-allied Bodoland People's Front (BPF) have been accused of re-instigating violence in Assam by an umbrella of 21 non-Bodo organizations (Hindustan Times). Yet, no action has been taken against them by Congress's Assamese Chief Minister Tarun Gogoi, and the BPF remains within the coalition. More to the point, while Gogoi slammed his own party's reluctance to deploy national troops to control the Kokrajhar violence, resulting in a delay of 72 hours (Economic Times), the Congress has, for the last 12 years, been vilifying Modi's Gujarat government for a similar alleged delay in deployment during the 2002 Gujarat riots.

And while it is true that corruption sealed the Congress's fate in this election, what was more worrying and irksome was the level of moral culpability and brazenness with which the ruling coalition reacted. In a press conference in January, PM Manmohan Singh remarked, "Most of the charges [of corruption] relate to period of UPA-I... We went to the electorate in 2009 and people gave us mandate to rule again... They do no seem to have paid heed to all charges of corruption." (Indian Express). When the India Against Corruption movement took them on, the response was to label its leader, Anna Hazare, as someone who was "mired in corruption from head to toe" and jail him (CNN-IBN). Even worse was when Law Minister Ashwani Kumar changed the "heart" of the Central Bureau of Investigation probe status report regarding the coal scam and later claimed that he was only performing "grammatical edits (TOI)." Gujarat's high anti-corruption ranking (Debroy and Bhandari, Corruption in India) and efforts at transparent e-governance provide a stark contrast and a hope for more transparency and efficiency in governance under Modi.

From this, it is abundantly clear why the Indian electorate turned its back on the Congress. But it is still instructive to ask whether, given the extreme negative criticism of Modi, India has jumped from the frying pan and into the fire. To this, the answer lies in the present moment of Indian politics -- in the BJP campaign and its aftermath, which was not only by-and-large non-sectarian but also presented a new vision of what "secularism" itself means and gave India a new and decisive direction.

"What is this 'secularism'?" you may ask. This philosophy is embedded in the BJP's slogan, "sabka saath, sabka vikaas (Everyone's support, everyone's progress)." The vision is one that drafts national economic policy not specific to any single ethno-religious group, while seeking to provide issue-specific support to groups where needed. For example, in the section of the BJP's manifesto that deals with minorities, entitled "Equal Opportunity for All," the party promises national madrasa modernization, promotion of the Urdu language, and the setting up of a permanent Interfaith consultative board to promote trust between religious communities. These stray from the Congress's view of providing quota-based economic incentives on the basis of religion and rather tends toward preserving the cultural fabric within minority groups.

Many aspects of this agenda were forgotten in the bitter cacophony of peripheral leaders. They were also seriously dampened by the party's abject failure to distribute enough Loksabha tickets to minorities. Yet, it is undeniably significant that in a rally in Patna, Modi thundered, "I ask my poor Muslim brothers. I ask my poor Hindu brothers -- do you want to fight Muslims or poverty? Do you want to fight Hindus or fight poverty?" An electric wave from the crowd responded, "Against poverty!" I have seen many of Modi's speeches on this campaign trail, but no moment was as reassuring as this. 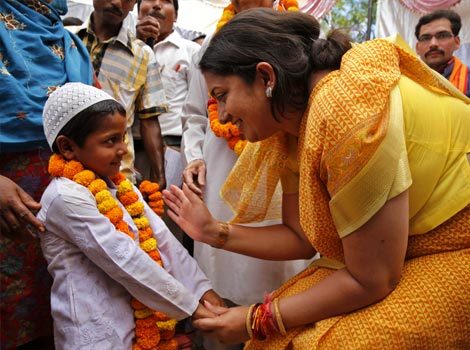 These are not merely hollow, academic observations, either. In heavily Muslim-concentrated areas of Delhi -- Sadar Bazar, Najafgarh, Chandi Chowk -- the BJP defeated its largest competitor, the AAP by large margins (IndiaToday). Similarly, the BJP could not have won the South Goa seat without the support of a significant proportion of the Catholic community. All this represents a genuine ascendance of economic issues of development over and above the issues of sectarian identity politics and rank appeasement that have long occupied the electoral space from all corners in the past. Though it remains to be seen whether the Modi government will be able to fulfill these promises, the nature of the mandate -- which has very little to do with sectarian issues -- offers great hope for inclusiveness and religious harmony in the future of Indian politics.

So far, the markets in India seem to have responded with enthusiasm to Modi, with the Sensex having advanced 5 percent on May 16 alone (CNN Money). Still, I must confess that I have no love lost for the neo-liberal, "trickle-down" economics that many analysts say will boost the Indian economy. But I think Modinomics will not be quite that. To begin with, I don't think the Gujarat model of development is as socially unconscionable as it critics claim (why?). Nor is it the case that the BJP will rollback the welfare measures of the previous government, as has been clarified by the party. This is in stark contrast to the Republican-controlled Congress of the early '50s after the New Deal.

The focus of the new government seems to be on linking these schemes to asset and skill creation, creating massive amounts of infrastructure, and cutting red tape known in India as "license raj." According to Arun Shourie, the focus of the Modi government will be on more efficient targeting of welfare schemes (NDTV). This is desperately needed. Much of the problem with the Congress's economic program was its offhand approach; schemes were rolled out with little regard to the infrastructure or bureaucracy needed to support them. For this reason, the National Rural Employment Guarantee Act (NREGA), experienced massive leakages (Indian Express), and the food security bill has been questioned on grounds of implementability given the chronic lack of storage for food grain. And thus, it is my hope that Modi's economic program will not only reclaim the Indian economy from a flagging GDP growth rate, massive policy drift, rampant inflation, and industrial contraction, but also do so in a way that minimizes the economic marginalization of the less fortunate. After all, Modi did say in an emotional post-election speech that his government would be dedicated to "the poor, youth, and women (Economic Times)."

One of the greatest hopes from the Modi victory, however, is on the foreign policy front. For years, commentators have lamented India's inability to emerge as a regional superpower and claim its place on the world stage. Modi's invitation to all South Asian countries for his swearing-in ceremony signals a more active engagement with neighbors. His existing relationship with Japan as Gujarat's chief minister and proximity to PM Shinzo Abe provides hope that the India-Japan relationship will be able to fuel mutually beneficial economic ties but also balance China's growing influence in both East and South Asia. It seems as though India may find a cohesive foreign policy strategy under Modi, a "grand strategy" -- something it hasn't had in years.

Turning again to the nature of the mandate, a BJP majority provides prospects for economic stability and consistent policy outlook. For the past 30 years, successions of coalition governments have hamstrung cohesive and consistent policy-making. That the BJP has achieved a majority on its own therefore indicates a respite from this dubious era. Moreover, the fact that the Congress has reached 44 seats opens the door for what Modi calls a "Congress-mukt Bharat" (an India free of the Congress). It offers the prospect of new perspectives, such as that of the Aam Aadmi Party, to occupy the space of leftist opposition within the Indian polity. This would bode well for the future of truly progressive politics in the long run.

I have not yet even addressed the issue of energy and the environment, on which the BJP makes hopeful strides on protection of the Himalayan ecosystem and wildlife, such as endangered Indian rhinos, as well as on outlays to solar energy production. There is much more that can and perhaps needs to be said, and I urge conversation, especially dissent, on the opinions expressed here. If the BJP strays from its stated agenda, I will be as harsh in my criticism of the incoming government as I've been of the outgoing one. Still, my takeaway from the elections is this: the Indian people have voted for hope and credible change for very good reason. It's too early to burst the Modi bubble just yet.

Narendra Modi was sworn in as India's 15th Prime Minister on May 26.