The end of Mad Men, which I viewed on the small screen of a notebook computer in, of all places, Dien Bien Phu, Vietnam, two weeks ago, is simply perfect.

I have waited to comment on it to give those who had not yet seen it time to do so.

The television series brilliantly (apart from one down season a few years back) carried viewers on a tour through the tumultuous changes in American society from the late 1950s to the beginning of the 1970s. It did so through the lens of the advertising industry, with the social, cultural and political upheavals of the era as a backdrop.

Advertising was just the thing -- the UnReal Thing -- to provide insight into what happened in --and to -- "The Sixties." The largely unappreciated fact is that the objectives of the Counterculture and the commercial "Counting Culture" were not so different. Both promoted hedonism.

In the 1950s, leading corporate consultant Ernest Dichter proclaimed: "One of the basic problems of prosperity is to demonstrate that the hedonistic approach to life is a moral and not an immoral one." People, in short, had to be persuaded to adopt self-indulgence as a way of life so that "stuff" could be sold to them. 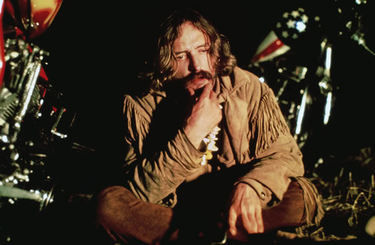 The 1969 film Easy Rider marvelously captured this connection at a time when few saw it. Billy, the perpetually stoned Dennis Hopper character, sounds exactly like the middle-class Americans targeted by the Madison Avenue Men: "We've done it... We're rich, man. We're retired in Florida, now, mister." "That's what it's all about, man. I mean, like you know -- I mean, you go for the big money, man, and then you're free. You dig?"

The Mad Men ending reiterates that message from Easy Rider and the ease with which the chants of the Sixties were molded into the advertising slogans of later years, as in the hippie refrain, "If it feels good, do it!" becoming Nike's "Just Do It!"

The smile that comes across Don Draper's face as he is sitting in lotus position and chanting "ooom" at a commune in Big Sur, where everyone is constantly asked how they "feel" about this and that, is the idea for the 1971 "I'd Like to Teach the World to Sing" Coke commercial, one of the greatest and most memorable ever made, into which the smile fades.

Getting inspiration at a commune for a way to sell a product through the feelings, sound, and imagery of the Sixties flawlessly captures what happened to the spirit of the decade and how readily it was co-opted by commercial America.

Mad Men's epitaph for the Sixties is the same as that of Wyatt, the Peter Fonda character in Easy Rider: "We blew it!"

But Mad Men demonstrates how we blew it.

Yet, even as it is selling a product, the wonderful Coke commercial also shows the spirit of the Sixties: the "different strokes for different folks" acceptance of difference that is the decade's greatest legacy and is triumphing more and more today.

The perfect ending for a nearly perfect show.

Robert S. McElvaine is completing a book on America in 1964: "The Times They Were A-Changin' - The Year 'The Sixties' Arrived."