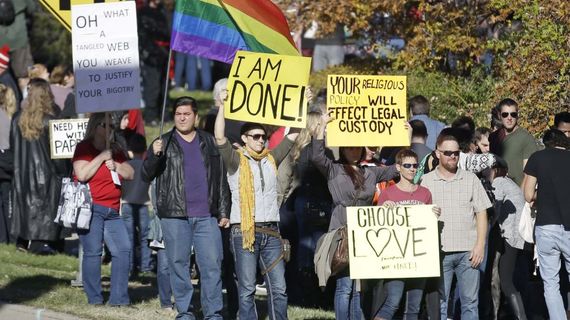 Image: People gather for a mass resignation from the Church of Jesus Christ of Latter-day Saints in Salt Lake City. (Associated Press)

A couple of weeks ago, the news of a change to the Mormon (LDS) Church's policy regarding LGBT members and their children was leaked to the press. According to the new policy, children living a household with same-sex parents can no longer be baptized until they are 18. (Mormon children are typically baptized at the age of eight.) Once they reach the age of 18, if they wish to join the Church, the children must "disavow" their parents' same-sex relationship and leave their parents' household.

The broad wording of the new policy spurred speculation regarding how it would be interpreted. For example, as the policy is worded, a child who is living with one heterosexual Mormon parent might be excluded from baptism if custody is shared with a homosexual parent. In fact, one young girl's baptism, scheduled for the weekend after the new policy was leaked, was reportedly cancelled because her gay father shares joint custody of her. Similarly, a boy or girl who is anticipating leaving on a mission soon might be barred from serving if their parents divorce and one of their parents comes out as gay or lesbian in the interim.

Last week, the First Presidency (the Mormon Prophet and his two Counsellors) of the Mormon church issued a clarification of the policy. According to the "clarification," the policy only applies to those children "whose primary residence is with a couple living in a same-gender marriage or similar relationship." Also, children living with such a same-gender couple who have already been baptized and are actively participating in the Church are exempted from the policy. But the inadequacy of this "clarification" in the minds of some was evident when approximately 1,500 people resigned en masse from the Mormon church the next day.

While the "clarification" leaves a great deal to be desired, it does make three things clear:

Any question about the primary impact of the policy has been laid to rest. The children of LGBT couples must wait to they are 18 to receive sacraments which are routinely extended to eight year old children in the Mormon church. Once they reach the age of 18, they may then petition the highest authority of the Mormon church for baptism, but only if they are no longer living in the household of their co-habitating/married LGBT parents, and only if they "disavow" the same-gender cohabitation and/or marriage of their parents. This is something that is not required of any other children in the Mormon church. Not even children of unmarried heterosexual couples who are cohabitating are barred from baptism.

It remains unclear whether the children LGBT couples will be able to receive the communion (which Mormons call the "sacrament") on Sundays in spite of not having been baptized with their peers. (Adults must first be baptized in the Mormon church in order to take the communion.)

2. The Mormon church leadership has an outdated conception of "family."

The fact that the Mormon leadership did not at first consider the situation of children of divorced parents shows how out of touch they are with the reality of contemporary families. But even the "clarification" reveals their ignorance of how complex and fluid custodial arrangements can be. The limitation of the policy to children whose "primary residence" is with the same-sex couple is not, in fact, much of a clarification at all. In a society where over half of marriages end in divorce, and shared physical custody arrangements are becoming increasingly common, determining what is a child's "primary residence" may be very difficult in many cases.

I am a lawyer and this is an issue I have litigated in the context of the interpretation of insurance policies. Even the courts have difficulty interpreting insurance policies which bar coverage for "residents" in cases where the physical custody of a child is split between the two parents. In these cases, the child may have a bedroom at each parent's house. They may keep clothing and other personal belongings at both houses. They may spend roughly the same amount of time at each residence. They may use one mailing address for child's school and the other for the child's doctor.

How is the lay leader of a local Mormon congregation to make this determination when courts and lawyers find it challenging? Does the Mormon church leadership intend the local Mormon bishops (the Mormon term for "pastor") to try to calculate the days or hours that a child lives with each parent in order to determine whether or not they may by baptized? And will one extra day spent with the homosexual parent really bar them from bar them from the holy sacraments?

And what impact will this policy have on custody battles where one parent is LGBT? It is easy to imagine a disparate impact on the LGBT parent where the heterosexual parent argues that sole physical custody should be granted to them to avoid the child's exclusion from full participation in their church.

3. The policy will continue to test the faith of many members of the Mormon church.

The new policy also re-categorizes "same gender marriage" as a form of "apostasy," in contrast to same gender cohabitation, which is categorized as a "serious transgression." Other "serious transgressions" include attempted murder, forcible rape, sexual abuse, spousal abuse, intentional serious physical injury of others, adultery, fornication, and deliberate abandonment of family responsibilities. While non-married homosexuals continue to be grouped with rapists and child molesters, the Mormon church now considers married homosexuals to be "apostates," worse than rapists and child molesters.

These policy changes have been deeply upsetting to many members of the Mormon church, even some who are not previously bothered by the Church's stance of same-sex marriage. Some of those who are most disturbed by the policy change are the Sunday School leaders and teachers, those who interact on a weekly basis with the children who will be affected.

The policy will also continue to test the faith of Mormons who may not be directly impacted by the new policy, but who have LGBT family members. Even if their children do not fall within the scope of the policy, the change nevertheless sends a message that LGBTs and their children are not welcome in the Mormon pews. One Mormon mother of both gay and straight children wrote to me describing the policy as "a very harsh, almost Old Testament type sacrificing of innocent children over what is perceived to be the sinful lifestyle of their parents."