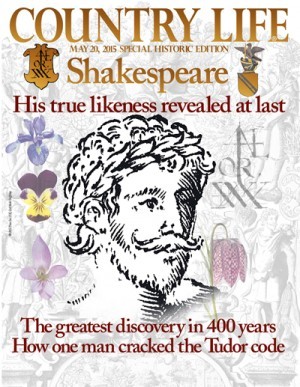 A great deal of fuss has been made this week about a supposed "newly discovered portrait of Shakespeare" found on the title page engraving of sixteenth century botany book. The editor of UK lifestyle magazine Country Life, in which the discovery was announced, declared it "The Literary Discovery of the Century." The story was dutifully picked up by BBC News Online, and such is the clout of the BBC that by yesterday, all major news outlets were excitedly repeating the story, leading it to trend across social media. The botanist who made the discovery quickly morphed into a "historian" and NBC news even multiplied him into "historians" to add a little weight to the theory.

But the portrait is not a portrait of Shakespeare. There were one or two knowledgable people explaining in the comments sections of various news items yesterday who it was and why, but since their explanations seem to have been drowned out by a slew of "hipster facial hair" comments and breathless speculation, I thought I'd set them down here, in the hope that the madness might be stopped.

The engraving, on the frontispiece of John Gerard's The Herbal or General History of Plants is a representation of Dioscorides, a Greek doctor from the time of the Roman emperor Nero. His book on herbal medicine had been the standard text on the subject for 1,500 years. In other words, he was considered something of an authority on the subject of the book, and was depicted there to give it his seal of approval. For being the top writer in his subject, he gets a laurel wreath on his head. The Roman army toga is a bit of a clue, for Dioscorides was a physician in the Roman army. Why Shakespeare would be depicted in a toga is anyone's guess.

We can be sure that the picture is meant to be Dioscorides because when the book was updated and reprinted in 1633, he was helpfully labelled. You can compare the two images for yourself. Here he is in the first edition of 1597. And here is the same guy -- same facial hair, same toga, same footwear -- in the second edition of 1633, on a plinth that says "Dioscorides." Just in case someone thought he was Shakespeare or Francis Drake, or someone else with a fancy mustache.

Country Life's gardening expert, Mark Griffiths, makes a great deal of the fact that the figure is holding a snake's head fritillary and a cob of corn. In Ovid's version of the story, which Shakespeare used for his long poem "Venus and Adonis," Adonis was transformed into an anemone. Shakespeare referred to the flower only as "the purple flower... chequr'd with white," which one scholar has suggested might be either a fritillary or a variegated tulip. But, just because Shakespeare (possibly) referred to a fritillary, and even if he was the only poet of the period to do so, that doesn't make any chap holding a fritillary into Shakespeare.

Griffiths claims that the cob of corn in the figure's other hand is a reference to Titus Andronicus. But the "corn" mentioned in Titus Andronicus is very clearly wheat, not the newly imported American plant maize. We know it is wheat because it is thrashed ("first thrash the corn, then burn the straw" -- 2.3.123) and gathered into sheaths ("This scattered corn into one mutual sheaf" -- 5.3.70). You do not do this with corn-on-the-cob. "Corn" in Elizabethan England denoted any kind of grain, and according to the Oxford English Dictionary, maize was not referred to as "corn" without the modifier 'Indian' before 1809. This removes any argument that it might be Shakespeare who is holding a cob of corn.

The frontispiece show Dioscorides holding these new plants to make the point that Gerard's book is bang up to date. The picture represents the ancient authority (Dioscorides) being updated with Gerard's new knowledge. It is an attempt to establish Gerard as the new authority in the subject.

Now to the key part of the new claim; the peculiar "cipher" written on the plinth underneath the figure, which Griffiths 'decoded' to arrive at Shakespeare. He sees the first part as a four (and also as an arrowhead) (with an "E" stuck to it ). Quoting the Guardian article:

In Elizabethan times, people would have used the Latin word "quater" as a slang term for a four in dice and cards. Put an e on the end and it becomes quatere, which is the infinitive of the Latin verb quatior, meaning shake. Look closely and the four can be seen as a spear.

Look closely and you can see almost anything you want to see. In the fascinating world of the Shakespeare authorship question, I witness this kind of thing all the time. Griffiths says the "Or" is because the Shakespeare family had recently been granted a coat of arms with a gold background and the heraldic term for gold is "Or." Below that, he sees a "W" for "William." Case closed!

But this cipher was in fact the Mark of William and John Norton; John Norton (William's nephew and apprentice) was the printer of the book. It was noted as their mark in the 1749 book, Typographical Antiquities. Printers marks like this were a standard device of the period, as you can see from this frontispiece on the British Museum Website.

In short, then, as with so many Shakespeare news items that cause near-hysteria in the mainstream media, this is much ado about nothing. It is possible that the story already has enough momentum to become a new truth, and that future Shakespeare news items will appear under a picture of the Greek physician Dioscorides just as many, thanks to the last of these "newly discovered picture of Shakespeare" stories, now appear under a picture of Sir Thomas Overbury. But, I sincerely hope not.

Credit is due to many sources for the information in this article, chiefly Guardian commenter 'MisterJim', John Overholt, Miriam Jacobson and Tom Reedy.

Author of 'The Marlowe Papers' and 'Shakespeare: the Evidence'