By now you have probably seen VH1's foray into the anti-bullying world. In the video, dubbed by the Washington Post as "Glee-like," school-aged nerds sing confidently about how they will get revenge on their tormenters by being their bosses, making them their "slaves" and "pets," abusing their power, making sure they never rest, and never giving them pay raises. Though intended to be empowering and to potentially make those who bully others "regret" their actions, the video actually sends the opposite message. 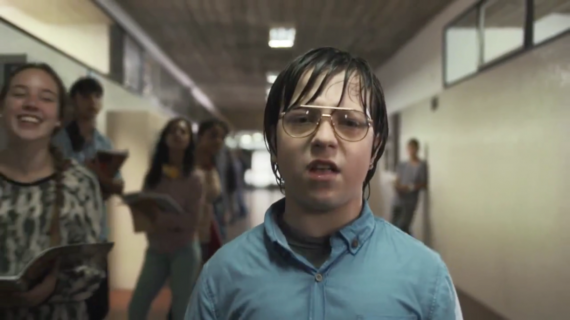 It is hard to even start pointing out the misinformed, misguided and disturbing nature of the video. Firstly, the video depicts very graphic and gut-wrenching acts of bullying that are sincerely difficult to watch. The nonchalant nature with which they are presented seems to suggest that being strung up a flag pole and being de-pantsed in the hallway are normal childhood occurrences. In reality we know that physical forms of bullying are actually decreasing -- although bullying, overall, is not. Plus, all of the youth in the video are white, only one in four of the "nerds that became bosses" is a girl, and all of the bullied students are stereotypically nerdy. These illustrations of stereotypical bullying (not to mention gendered success in the workplace) reinforce the incorrect notions that impede addressing the issue. As I've mentioned in previous posts, bullying is complex and there is no single profile of youth who are bullied or who bully others. It's not as simple and overt as the toilet bowl "swirly" featured at the beginning of the video; rather bullying can be as covert as a targeted eye-rolling and rumor-spreading. The video implicitly suggests that only this single profile of bullying counts and only those victims will get their revenge. What about the rest who don't fit that illustration?

Additionally, the students being bullied in the video seem resigned to just take the bullying that is coming to them. There is no indication that the bullying can or should be stopped. First, never in the video do we see anyone do anything to address the bullying as it was occurring. Throughout each scene we see plenty of bystanders looking on at the bullying taking place, doing absolutely nothing. The school seems to be absent of any adult presence or supervision.

This reflects a cultural norm we have been gradually moving away from -- that bullying is an inevitable part of growing up, but it'll get better eventually. Even more explicitly than the It Gets Better Project, which received criticism for suggesting that we can't make it better now, the piece suggests almost that in order to become the boss and to become successful, you have to grin and take what is coming to you. This portrayal neglects the emerging research that the effects of bullying linger well after it ends, and can actually impact individuals' financial success. In reality, the most recent longitudinal study shows that men who were bullied in childhood were more likely to be unemployed and earn less money than those who were not -- quite the opposite of what this video suggests.

Let's pretend that the video's bullied youth do become the bosses. The video implies that they have the right to become abusive in the workplace to those who bullied them. With reports of "workplace bullying" continuing to increase, do we really want to suggest that being an abusive boss is okay as long as workers "deserve it"? Do we really mean to perpetuate the cycle of bullying, especially when we know that youth who both are bullied and bully others are at the highest risk for negative outcomes such as depression and suicide? Has VH1 just given carte blanche to those who were formerly bullied to abuse their subordinates? Plus, aren't we, as adults, supposed to be setting the right example for our youth? It also seems by this video that the only reason someone shouldn't bully is the fear of being bullied themselves. Knowing the complexities of why youth bully, I simply don't see this as being enough to really get youth to stop. Aren't they doing a service, anyway, by helping the bullied youth become successful?

Perhaps the point of the video was to start a discussion and point out how its messaging is so backwards. But I doubt it. I just hope that those being bullied now don't feel even more discouraged when they see this video.