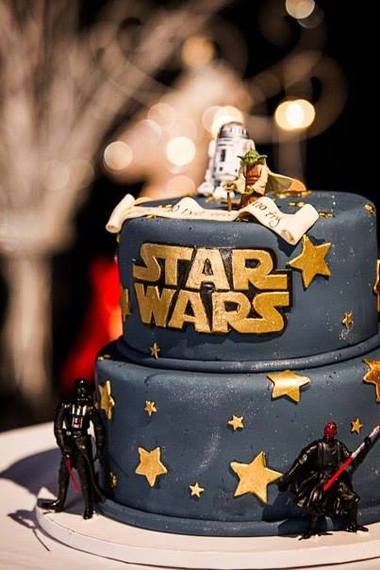 This is a note to all of us boyfriends, girlfriends, husbands, wives, partners, best friends, parents and children of Star Wars fans. Look, I'm not an avid fan. My husband, however, can name every random planet from the movies, and knows what AT-AT abbreviates. He sees Star Wars as almost a religion, and up until this point, I've been a supportive bystander. I gave him a Star Wars grooms cake. We had a Star Wars-themed Christmas party. But I never really GOT it. I never really felt impassioned, enthralled, and beyond loyal to a series of movies that seemed to be, let's be honest, a little antiquated and predictable (bear with me).

Then tonight I realized I felt that way because I have never seen the movies FOR THE FIRST TIME. Yes, we watched the trilogy the minute we got engaged (it was a pre-requisite to walking down the aisle for him) but by that time I had heard all about the movies, practically knew the plot without seeing the films, and especially was well-acquainted with the big "twist" at the end of The Empire Strikes Back. Which is why this movie, the new Star Wars: The Force Awakens, was so special and wonderful for me.

Listen, skeptics, when someone important to you asks you to go to the new Star Wars film with them, avoid rolling your eyes and making an excuse not to go. Because this movie, in the brilliant way that its written and filmed, allows you to enter the Star Wars world of your loved one, while falling in love with it yourself. It allows you to share this die-hard loyalty that seemed so crazy eight minutes before the film began. This new film not only "awakens" the love of Star Wars for the existing enthusiast, but it impacts the newbie in the same way. It lets you share that world with your companion, gripping their hand tightly and sitting on the edge of you seat with the rest of the theater.

What I loved most about the film is that my husband and I were sharing something he loved so intensely together for the first time. He didn't know what was going to happen any more than I, and I found myself clapping wildly when Harrison Ford appears onscreen just as much as he. The movie intertwines some of the original cast with new ones, and in this way it breathes new life into the entire franchise. I think JJ Abrams did an incredible job of developing new characters, and I especially loved the presence of female characters on both sides. The characters are simple, not distracting, and the plots are clever. I really identified with the lead character's struggle to find him or herself (I told you, no spoilers) much the way that I think so many fell in love with Luke's finding himself in the original. The movie is visually stunning (I saw it in IMAX 3D) and it definitely made me wish for more.

And at the end credits, whether you loved it or hated it (my bet is you will love it) it will give you a new appreciation for the love of the "force", and most importantly of your partner in crime sitting next to you. After all, we're all Jedis at heart, it just takes an "awakening" to realize it.