During my time at Apple and Facebook, I worked on a number of projects that converged interest in design and technology to ultimately connect people together. I've always been interested in the size of the networks people interact with, as well as the various experiences, places, and things that contribute to human happiness in the context of those networks. My team has spent nearly a year of development of a new way of thinking about these concepts. We call it the personal network.

There's no question that ubiquitous access to PCs and the Internet have enabled more people to stay in touch than ever before -- and, as other Huffington Post contributors have noted, that can lead to information overload. Facebook is an incredible platform for staying in touch with the acquaintances in your life, like a cocktail party full of people whose company you enjoy. Twitter is part online soapbox, and, increasingly, part media network. I love both of those services and use them often.

However, neither are what my colleagues and I have dreamed of: A way for a trusted circle of close friends and family to share our most personal experiences and moments -- the kind of things that evoke emotions ranging from joy to wonder to contentment to sorrow. That's what I mean by the personal network.

Two leading psychologists have influenced our thinking. The first is Oxford Professor Robert Dunbar, an evolutionary psychologist who has extensively studied human behavior. Dunbar's Number -- that is, the number of stable relationships a person's brain is wired to maintain over time -- is 150, a figure that corresponds to everything from the average size of Roman military units to nomadic tribes. You'll find it referenced often in social networking discussions, with some arguing that it's limiting, and others stating that it's no longer relevant as online behavior changes. However, in my mind, the experiences that provide me with the most joy -- moments ranging from the night I got engaged to the perfect ski run -- are things that I really only want to share with a limited circle of friends and family.

A second psychologist, Princeton's Daniel Kahneman, frames our thinking with regard to experience. He thinks of each of us as having two selves, one that experiences life in the present, and another that tells stories defined by changes, significant moments, and outcomes. The way that we've engineered the personal network is designed to reflect each of these, by providing a real-time stream of experiences as well as a tagging and image framework that allows us to preserve memories over time.

The catalyst that is powering the personal network isn't the Internet itself, but the mobile Internet. By 2014, there will be more mobile Internet users than desktop users worldwide. Even sooner, the vast majority of those will be using camera phones. Everyday consumers are visually capturing the people, places, and things that matter most to them, but only now have they had the ability to share them in real-time, wherever they may be.

The mobile Internet is bringing my dream to life. The personal network isn't vast (we actually limit it to a subset of Dunbar's number) -- but it is powerful. It's built by visually capturing the important experiences in your life with photos, and instantly sharing them with your trusted circle of friends and family while adding the important context of people, places, and things.

For example, I'm a skiing fanatic. I have a small group of friends who really enjoy it as well, and find it as exhilarating, peaceful, frustrating, and therapeutic as I do. Thanks to my personal network, a close friend might share a memorable ski run as follows: 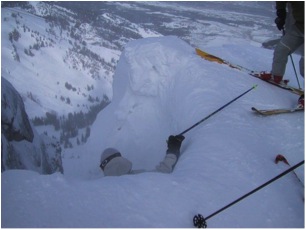 To most of my college classmates, former colleagues, and distant cousins -- people who I often share information with on other networks -- that information is largely irrelevant. To my close friends who know that Corbet's Coulier is known as America's scariest ski slope, a picture and eight simple words are conveying a wealth of valuable information and shared experience.

We think the personal network belongs on the mobile Internet first, and the Web second. We don't want to be the biggest network in the world -- far from it -- but we want to give you a way to authentically express yourself, help close friends share experiences, and ultimately convey joy and delight. It's been a fascinating platform to develop and we're really looking forward to your feedback.