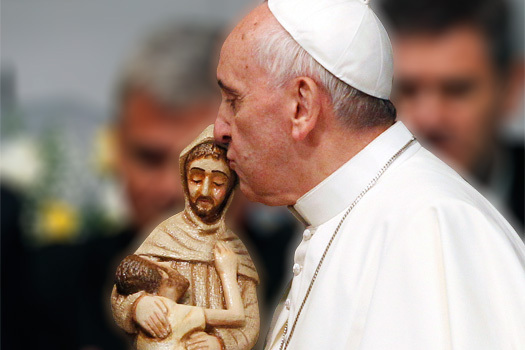 Pope Francis kisses a hand-carved figure of St. Francis given to him at a hospital in Rio de Janeiro. (CNS photo/Paul Haring)

Even before Pope Francis' environmental encyclical was published, critics were calling the Pope a "pagan". This isn't all that surprising given how the religious right has always accused environmentalists of "paganism". Koprowski himself asked rhetorically on Thursday, "What is environmentalism but nature worship?"

So how "Pagan" is the Pope's position on the environment? There are some similarities between the Pope's environmental encyclical and contemporary eco-Paganism. For example, in the encyclical, the Pope personifies the earth, calling the earth "Sister" and "Mother". However, this language is drawn from a Christian, not a Pagan, source: St. Francis of Assisi's "Canticle of Creatures". And Pope Francis makes a point of emphasizing that he is not "divinizing" the earth. Instead, his intent is to describe the "fraternal" nature of our relationship with the earth and its inhabitants, both human and non-human, which he says have their own intrinsic value independent of their usefulness to us.

However, this does not make the Pope "Pagan". Contemporary Paganism is a nature religion. As Pagan Studies scholar Michael York has explained, "even though such world religions as Christianity and Islam might cherish nature as a divine gift, they do not comprise nature religions. Instead, I argue that any religious perspective that honors the natural as the sacred itself made tangible, as immanent holiness, is pagan." Rather, the Pope's statements merely show how ubiquitous the idea of our interconnectedness with the earth has become. More than anything else, they are a reflection of the Pope's acceptance of what has become scientific consensus.

Contemporary eco-Paganism is a form of "deep ecology", which challenges the anthropocentric paradigm that places humans hierarchically "above" other living species and above inanimate matter, which is seen to exist in some sense "for" humans. From an eco-Pagan or deep ecology perspective, the Pope comes to many right conclusions about anthropogenic climate change and the limits of capitalism, but his language is nevertheless characterized by a deep-rooted anthropocentrism.

In support of this qualified anthropocentrism, the Pope argues that, in the absence of a belief in our superiority, human beings will not feel responsible for the planet. It is true that human beings are "unique" in many ways among the world's fauna, but only in so far that other forms or life are also unique in their own ways. It is reasonable to argue that humans have special responsibilities to the earth, due to our highly developed cerebrum (especially considering the messes we have made with our highly developed cerebrum), but a feeling of superiority is not a necessary condition for a feeling of responsibility. In fact, a belief in humanity's "superiority" can actually weaken people's sense of ecological responsibility, just as a heightened sense of responsibility can grow out of a belief in our essential equality with all other living beings.

The Pope repeatedly characterizes the earth and nature as "fragile." If by "fragility" he is referring to the fact that all of our actions affect the environment or that the ecosystem is sensitive to change, then that is true. But the earth itself is not fragile. It is we -- and other species -- that occupy a fragile place in the ecosystem. The ecosystem itself is resilient. It has been here for over four and half billion years, thousands of times longer than we humans have. It doesn't need us; we need it. 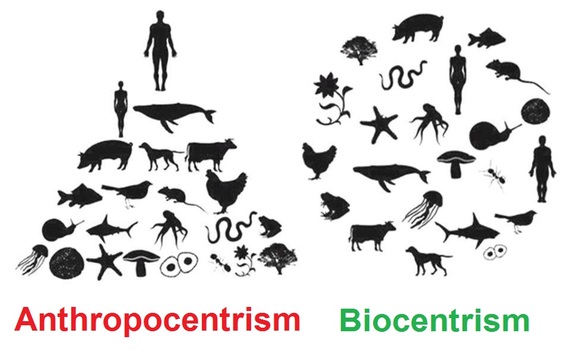 Stewardship Environmentalism and the Cosmic Hierarchy

The Pope's insistence on the "fragility" of nature and humankind's "superiority" is a symptom of an implicit Christian paternalism running throughout the encyclical. This paternalism is premised on a vision of nature as the Aristotelian "Great Chain of Being", with God at the top, angels and humans in the middle, and (other) animals, plants, and the earth at the bottom. This arrangement places humans in same relation to the earth as God is in relation to humans -- that of a powerful father to a weak child. This is why the Pope rejects "a divinization of the earth", as it would effectively break the order of the Great Chain.

The Pope also repeatedly refers to the earth as God's "gift" to humanity, an idea which is the foundation of a stewardship model of environmentalism. The idea that the earth is God's gift to humanity first of all implies that the earth is "property" which can be gifted, which arguably undermines the Pope's earlier talk about humans being part of nature. It also perpetuates the hierarchical vision of the cosmos and implies that our responsibility to the earth derives not directly and horizontally from our "fraternity" with nature, but indirectly and vertically through our filial duty to a paternal deity.

In 1967, professor of history Lynn White published an article in the periodical Science, entitled "The Historical Roots of Our Ecological Crisis". The article examined the influence of Christianity on humankind's relationship with nature. White argued that the environmental decline was, at its "root", a Christian problem. For White, the belief that the earth was a resource for human consumption could be traced back to the triumph of medieval Christianity over pagan animism, and even further back to the Biblical injunction to man to "subdue" the earth and exercise "dominion" over every living thing. Medieval Christianity, according to White, elevated humankind, who was made in God's image, and denigrated the rest of creation, which was believed to have no soul.

In his encyclical, the Pope attempts to answer White's charge, and he makes a valiant attempt to reinterpret the Genesis "dominion" language. He rejects the notion that being created in God's image and being given "dominion" over the earth justifies "absolute domination" over other creatures. Instead, he says, a correct reading of Genesis understands that language in the context of the corresponding commands to "till and keep", the latter word meaning "caring, protecting, overseeing and preserving". This, he says, "implies a relationship of mutual responsibility between human beings and nature."

This is orthodox Christianity, with its Great Chain of Being and the upstart human beings who don't know their place: "a little lower than the angels" and with all the creatures of the earth "under their feet". (Psalm 8:5-8) While arguably the Pope's encyclical is more "theocentric" than "anthropocentric", this is a distinction without a difference so long as humans are still placed above all other forms of life (other than God and angels) in the cosmic hierarchy. Far from being "Pagan", the Pope's environmentalism is - for better or for worse - Christian through and through.