Illustrating President Obama's ability to mix action with powerful symbolism, the public saw him suddenly climb from his armored limo during his Inaugural Parade and greet enthusiastic crowds assembled outside the National Archives and Navy Memorial on Pennsylvania Avenue.

The unannounced gesture matched a suggestion last fall by the Memorial's designer William Conklin -- who was the key urban planner also for the larger Penn Quarter project that created a national showcase from a slum neighborhood that had blighted Inaugural parades for years. 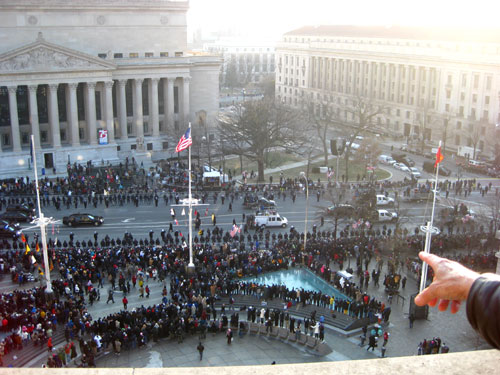 In a Nov. 22 letter, Conklin suggested to the President-elect that he emerge from his limo in front of the two national landmarks, which are located across the street from one another between 7th and 8th Streets on the route from the Capitol to the White House. Documents at the Archives include the U.S. Constitution and the Declaration of Independence. The Memorial honors those who served in the U.S. Navy.

"This momentary action on your part could express your admiration of (and support for) the Founding American Documents, and also perhaps show your appreciation of the military," Conklin wrote. "Then you would return to your car and be on your way to the White House." Conklin, 85 and now retired, mentioned in passing that he had been "the designer of this architectural scene." But he didn't amplify his background, or lobby his idea with any follow-up.

The President and First Lady Michelle Obama essentially followed the idea as they walked a couple of blocks in frigid weather. And Vice President Biden and his wife Dr. Jill Biden did the same thing when their limo later crossed 7th Street. 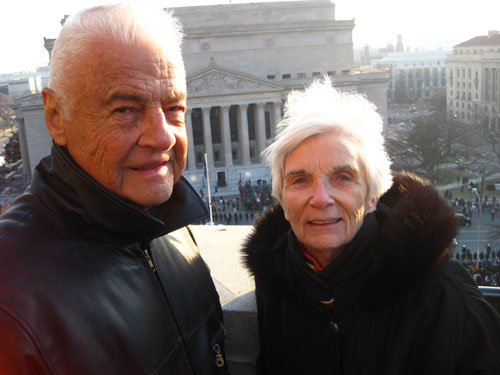 With his wife Barbara at this side, Conklin beamed with surprise and happiness as the scene unfolded two hundred feet away from their condo balcony overlooking the Navy Memorial. The Conklins were hosting a parade-watch for 16 journalism students and a professor from their alma mater Doane College in Crete, Nebraska. The couple had hoped that Obama might follow the suggestion, but fully understood why no official would reply to the letter: In wartime, the Secret Service would never want known where a President might walk through the streets, especially at the only place on the parade route with residential rooftop access and open-air balconies.

The condos are part of a pioneering urban development project called the Residences at Market Square to locate living quarters on the top floors of two office buildings in Penn Quarter, with arts, entertainment and historical buildings near one another. The late U.S. Sen. Daniel Moynihan (D-NY) was the prime advocate of this urban renewal project. He lobbied Congress, city officials and private developers who were often skeptical about the viability of a mixed-use neighborhood. Moynihan was fulfilling the request to him by the widowed Jacqueline Kennedy to help honor her husband's memory by upgrading a slum neighborhood that he had viewed as a national embarrassment during his 1961 Inaugural parade through it.

Like so much else about the Inauguration, this year's parade helped underscore the enduring power of the country's past, along with the dramatic tension of a desire for change. Located near the 7th Street corner, for example, is the studio of Matthew Brady, whose photos recorded so much of our current images of President Lincoln and the Civil War that freed the slaves. Nearby on the 8th Street corner is the former site of Signatures Restaurant, which was used in recent years by corrupt lobbyist Jack Abramoff to host officials trading influence -- within a hundred feet of FBI and Justice Department headquarters.

In a sense, the most powerful symbolic message might be if this President and his staff read their mail from well-intentioned and informed citizens, and then accept useful suggestions. We need that now.