How Hillary roots for working people and why we champion her in tonight's Presidential debate.

When Hillary Clinton takes the stage for her first debate with Donald Trump, her primary purpose should be very simple: she must let go, and be herself.

Hillary will make a tremendous president, and I am proud to work on behalf of her candidacy every day. She is committed to writing new economic rules that will put us on the path to shared prosperity. She is calling for a new direction on trade. She is proposing the most substantial investment in infrastructure since the interstate highway system, generating over 10 million new jobs. She wants bigger paychecks, paid time off, a fair schedule and the right to join a union for every single worker. 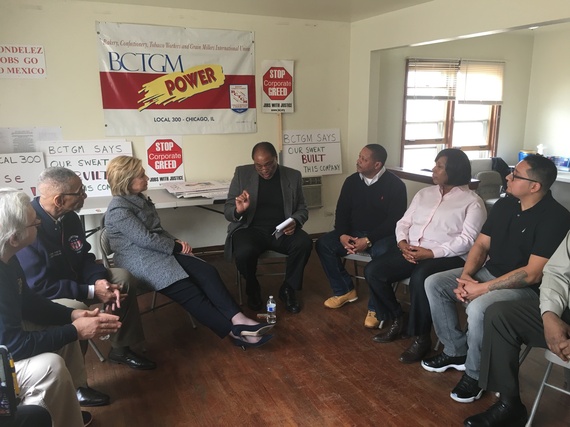 Hillary is the only reasonable, responsible, civil and moral candidate who will be on that stage at Hofstra University. But being better than Donald Trump is the lowest of bars. It is not enough. Millions of Americans are wondering if they'll ever get to experience the American Dream, and they are hungry for leaders who will never stop fighting for them.

But in the end, voters elect people, not just agendas. In this first debate, Hillary Clinton must show America her core: a compassionate, brilliant, forceful advocate for progress.

This is the Hillary Clinton I know. The woman who is driven by the same impulses today as she was 40 years ago, the hunger to steer America toward the progressive nature of our national character. A person of determination who spends every day thinking about ways to help others.

Americans have not seen enough of that Hillary. Partly, she has not let them, and partly, the tumultuous nature of our politics has overshadowed her true character.

Many Americans are angry and frustrated. Who can blame them? They are working harder than ever only to see their standard of living decline or grind to a halt. Those struggling to get by see Washington as increasingly out of touch, self-serving and more interested in conflict than compromise. So any politician with decades of service and a famous last name is going to be met with understandable skepticism.

Hillary Clinton acknowledges that when it comes to public service, the "service" part has always been easier for her than the "public" part. She has been scrutinized as much as any figure in American history. As the first woman to lead a major-party ticket, a double standard is often applied to her. She has a tendency to be guarded. Accumulating layers over four decades in politics can invite further doubt.

So Hillary needs to let America see the person who would lead them. In this debate, she should showcase the woman who marched on picket lines with workers, spent time and energy helping first responders after 9/11, and is one of the best listeners I have ever met.

That means trusting her convictions and expressing them from the heart. Remember, Hillary has never been on a November presidential ballot before. And she has never stood 50 feet from Donald Trump, with just a moderator in between. This moment is brand new, both for herself and the American public.

For all her years in public service, for all the caricatures and calculations, this debate is brimming with possibility. To win the election, Hillary Clinton must take full advantage.